The Trujillo Spring Festival [1] [2] is a festival and cultural event that takes place in the Peruvian city of Trujillo, between the end of September and beginning of October each year. This spring festival is considered one of the most representative of Trujillo city and honors its nickname of City of the everlasting spring. This festival is also one of the largest in the country and attracts the attendance of thousands of tourists from around the planet. [3] The main attraction of this festival is a traditional Corsican or spring parade, involving mainly beauty queens of Lions clubs across the continent; in the parade there's a competition in the decoration about spring allegory and to be honored with the award called the gold lion. It is organized by the Lions Club of Trujillo.

The first Trujillo spring festival was held in 1950, and since that time has been held each year with the presence of many visitors from all around the world. The organization is in charge of the Lions Club of Trujillo. The International Spring Festival was formalized by Supreme Decree No. 15 of May 31, 1961 and by Act of Congress No. 15621 of September 28, 1965 which Trujillo was appointed with the title of "Capital of Spring" for the first government of Fernando Belaunde Terry. [4] In recent editions of the festival artistic presentations are made in various parts of the city. [5] By the 61st International Spring Festival, through regional ordinance on September 30, 2011, in the province of Trujillo was declared a holiday. [6]

Characters of the festival

Parade at the Trujillo Spring Festival

During Trujillo spring festival in September and October there is peruvian paso contest. [7] Trujillo is known and considered as the Cradle of the typical Peruvian Paso Horse [8] as well as the Capital of Culture of Peru [9] so as the Capital of the Marinera dance and as the city of the everlasting spring. 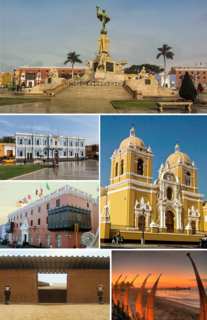 Trujillo is a city in coastal northwestern Peru and the capital of the Department of La Libertad. It is the third most populous city and center of the third most populous metropolitan area of Peru. It is located on the banks of the Moche River, near its mouth at the Pacific Ocean, in the Moche Valley. This was a site of the great prehistoric Moche and Chimu cultures before the Inca conquest and subsequent expansion.

Huanchaco is a popular vacation beach city in province of Trujillo, Peru. Huanchaco is known for its surf breaks, its caballitos de totora and its ceviche, and is near the ancient ruins of Chan Chan. Huanchaco was approved as a World Surfing Reserve by the organization Save The Waves Coalition in 2012 This historic town is part of the tourist circuit called the "Moche Route" or "Ruta Moche". 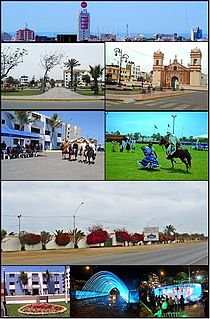 Víctor Larco Herrera also called commonly Víctor Larco is a district and a city of the north coast of Peru. It is located on a plain along the Pacific Ocean and is linked by a conurbation with Trujillo in La Libertad region. It is considered one of the 9 districts of the urban area known as Trujillo Metropolitano, one of the most populous metropolitan areas of Peru; it is also one of the 11 districts of Trujillo province. Victor Larco is the district that has the highest human development index (HDI) out of Lima Metropolitana, according to a study published by the United Nations Development Programme. In the early twentieth century, for its mild climate and fresh, it was known as Buenos Aires and then in 1945 got the name of Victor Larco Herrera in memory of the illustrious philanthropist Trujillan who was a benefactor of the city.

Vista Alegre is a town in the southwest side of Trujillo city, is in Victor Larco Herrera District in the province of Trujillo, La Libertad Region, Peru. 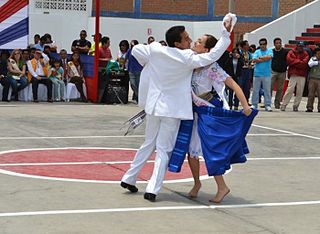 Trujillo Marinera Festival is a Peruvian cultural event held annually in Trujillo city in January. The event focuses on a dance contest called the marinera, a typical dance of the city and of the country. The festival also presents parades, presentations and competitions of Peruvian paso horses. Both the marinera dance and the Peruvian paso horse have been declared to be part of the cultural heritage of the nation by the Peruvian government. This festival is one of the most important cultural events and representative of the country and Trujillo city has been recognized by the Peruvian government as the National Capital Marinera by Law Number 24447, of January 24, 1986. 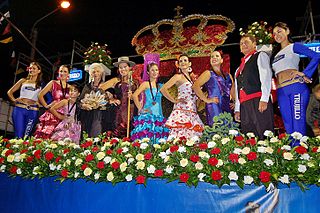 San José Festival is a peruvian patronal feast, it is held in the resort called Las Delicias beach in the district of Moche near Trujillo city and the central day is 19 March, the celebrations last a week more or less; these days are of feast and it has been a tradition with a strong Spanish influence, which are enjoyed various activities for adults, youth and children, party hosts are Don Jose and Doña Josefa and Ms Maja, the event begins with the description of characters, activities, bars, flamenco dancing, etc.; This festival is accompanied by a procession of the patron Saint Joseph, the fashion show, the bullfighting, the parade of characters, and toromatch pamplonada in which involved several teams from other regions of the country. Some houses are become in Spanish bars decorated with motifs like flags, grimaldas and posters. 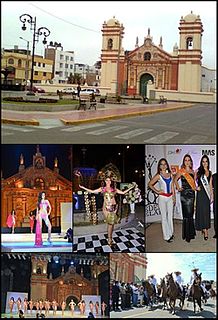 Santiago de Huamán, simply known as Huaman is a traditional village of Trujillo, Peru; it is located on the west of the city in Víctor Larco Herrera. Currently its main attractions are the church, baroque style, and the Patron Festivities that are held every year in May or June.

Puerto Morín is a Peruvian village and a beach located in Virú District, in La Libertad Region. It is located about 45 km south of Trujillo city. Puerto Morín is located within the jurisdiction of the Municipality of Santa Elena, locality of Virú.

In the Peruvian city of Trujillo, a Guaripola is a young woman who leads a band of musicians in a parade. She often juggles and gives a show of dancing and acrobatic maneuvering using a bar or stick, called a guaripola.

Competition of Paso Horses in Trujillo is a contest held in Trujillo city located at northern Peru. These competitions organized by the Association of Breeders and Owners of Paso Horses in La Libertad have as principal participants to the traditional Chalanes (riders) and Peruvian Paso horses in the city are celebrated annually. The care and training of Paso horses in this place is a very old tradition. Trujillo is known and considered as the Cradle of the typical Peruvian Paso Horse as well as the Capital of Culture of Peru so as the Capital of the Marinera dance, which is one of the most important cultural symbols in Peru.

The Foundation of Trujillo is an example of Spanish colonial expansion that took place in the area known today as the Valley of Moche in northern Peru. The exact date of Trujillo's foundation is still in dispute; according to historian Napoleón Cieza Burga it is November 1534. 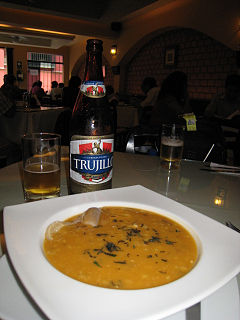 Gastronomic Fair of Trujillo called Sabe a Peru is a gastronomy festival held in the Peruvian city of Trujillo. This festival has been held on 17 and 18 November 2012. It took place in Mall Aventura Plaza Trujillo. In 2012 the festival paid tribute to the "mochero chili" for being an indigenous product, Moche culture legacy. Its historical roots are attractive to encourage experiential tourism in ancestral plots of Trujillo.

Open Plaza Los jardines is a shopping center of 25,000 m² located in the Peruvian city of Trujillo, in the locality called Los Jardines, east of the Historic Centre of Trujillo. It belongs to Malls Peru is owned business unit of Falabella Perú. This mall, called format Power Center by the same company, is characterized by at least four local anchor present here as Sodimac and Tottus hypermarkets, smaller operators are also present around anchor stores such as Do it, Coolbox, Boticas BTL, Topitop, etc. and a food court and a Financial Boulevard. This mall was built on what was the former Los Jardines Hotel and it opened on December 3, 2008 with an investment of 26 million dollars. Open Plaza Los Jardines is the 5th mall that Malls Peru company has constructed in the country.

Mall Aventura Plaza Trujillo is a shopping mall in Trujillo city, Peru. It was opened on November 30, 2007. It is Located in Mansiche avenue near the old locality of San Salvador de Mansiche at northwest the Historic Centre of Trujillo. This mall is the largest in the city and one of the largest in the country. In this shopping center in November 2012 was held the second Gastronomic Fair in Trujillo called Sabe a Peru.

The Paseo de Aguas is a tourist boulevard in Trujillo city in northern Peru. One of its main attractions is the Tunnel of Wishes, formed by arches of water with multicolor effects. It also has a round pool with multicolored jets of water arranged in circular form with spaces where people can walk into the pool. It is located at the intersection of Larco with Victor Raul Haya de la Torre avenues, near Cesar Vallejo University. 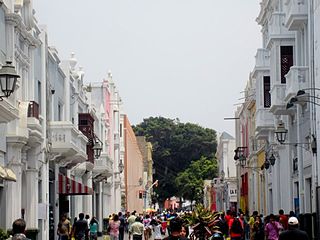 The Plazuela El Recreo is a traditional square located in the Peruvian city of Trujillo in La Libertad Region in northern Peru. Situated at the 8th block of the Pizarro street in the Historic Centre of Trujillo in this square are held cultural shows and in March 2012 was the scenery of Trujillo Book Festival. The square has high ficus around. This square has been declared Monumental Heritage of the Nation by the National Institute of Culture of Peru.

Paseo Pizarro is pedestrian walk located on the main street of Trujillo city, in Peru. Pizarro street in blocks 5,6,7 and 8 becomes exclusively a pedestrian and joins the Plaza de Armas with the Plazuela El Recreo, along its four blocks are numerous landmarks like the Palace Iturregui, the Emancipation House, etc. and businesses such as supermarkets, souvenir shops, cafes and bars, etc.

The Sports complex Mansiche is the current home of Trujillo's professional sports teams, a city of northern Peru. This sport complex will be the main site of 2013 Bolivarian Games that will be held in the city in November 2013. It is located near the old and traditional town of San Salvador de Mansiche.

Dulcería Castañeda, is a traditional company and brand of candy in the Peruvian city of Trujillo. Since year 1925 traditionally this company made several kind of candies called alfajors and specially that giant candy called "Alfajor king kong" before known as Alfajor de Trujillo, "Dulcería Castañeda" currently has several local in Trujillo also in Lima city. Its main products are the alfajores requested by tourists as classic sweet souvenirs of the city of the everlasting spring. According to a study published in 2010 by the magazine Peru Económico this is one of the top ten brand of the city.