Trunkline Pipeline is a natural gas pipeline system which brings gas from the Gulf coast of Texas and Louisiana through Mississippi, Arkansas, Tennessee, and Kentucky to deliver gas in Illinois and Indiana. It connects to the Henry Hub, Egan Hub, and Perryville Hub. The total length of the system is 3,059 miles (4,923 km) and its capacity is 1.5 billion cubic feet per day (42 million cubic metres per day). It is operated by Trunkline Gas Company, a subsidiary of Energy Transfer Partners. Its FERC code is 30.

The pipeline project started when on March 12, 1947, independent owners of South Texas gas reserves incorporated Trunkline Gas Supply Company. In 1949–1950, the project was taken over by Panhandle Eastern energy company. [1]

In 1998, the pipeline was acquired by CMS Energy from Duke Energy, which absorbed Panhandle Eastern few years earlier. [2]

In 2012, it was announced that a 770-mile (1,240 km) section of the pipeline will be converted to crude oil pipeline to transport Canadian and Bakken oil from Patoka, Illinois, to St. James, Louisiana. [3] This project was cancelled. [4] In 2014, the Energy Transfer Crude Oil Pipeline Project (ETCOP) was announced. ETCOP will use 678 miles (1,091 km) of the existing 30-inch (760 mm) Trunkline, which will be converted and reversed. In addition, 66 miles (106 km) of new pipeline will be built. In Patoka, the ETCOP will be connected with the Dakota Access Pipeline. The pipeline runs through Illinois, Kentucky, Tennessee, Mississippi, Arkansas, and Louisiana, and its terminus will be near Nederland, Texas. The pipeline will have a capacity of 450,000–570,000 barrels per day (72,000–91,000 m3/d). [4] [5] 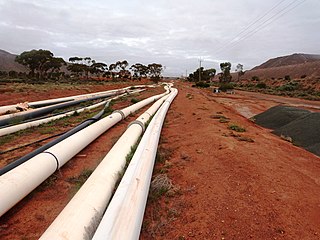 Pipeline transport is the long-distance transportation of a liquid or gas through a system of pipes—a pipeline—typically to a market area for consumption. The latest data from 2014 gives a total of slightly less than 2,175,000 miles (3,500,000 km) of pipeline in 120 countries of the world. The United States had 65%, Russia had 8%, and Canada had 3%, thus 75% of all pipeline were in these three countries.

Patoka is a village in Marion County, Illinois, United States. The population was 584 at the 2010 census.

Cushing is a city in Payne County, Oklahoma, United States. The population was 7,826 at the 2010 census, a decline of 6.5% from 8,371 at the 2000 census. Cushing was established after the Land Run of 1891 by William "Billy Rae" Little. It was named for Marshall Cushing, private secretary to U.S. Postmaster General John Wanamaker.

The Enbridge Pipeline System is an oil pipeline system which transports crude oil and dilbit from Canada to the United States. The system exceeds 5,000 kilometres (3,100 mi) in length including multiple paths. More than 3,000 kilometres (1,900 mi) of the system is in the United States while the rest is in Canada and serves the Athabasca oil sands production facilities. Main parts of the system are 2,306-kilometre-long (1,433 mi) Canadian Mainline and 3,057-kilometre-long (1,900 mi) Lakehead System. On average, it delivers 1.4 million barrels per day of crude oil and other products to the major oil refineries in the American Midwest and the Canadian province of Ontario. The Canadian portion is owned by Enbridge, while the U.S. portion is partly owned by that company through Enbridge Energy Partners, LP, formerly known as Lakehead Pipe Line Partners and Lakehead Pipe Line Company.

Petroleum production in Canada is a major industry which is important to the economy of North America. Canada has the third largest oil reserves in the world and is the world's fourth largest oil producer and fourth largest oil exporter. In 2017 it produced an average of 667,747 cubic metres per day (4.2 Mbbl/d) of crude oil and equivalent. Of that amount, 64% was upgraded and non-upgraded bitumen from oil sands, and the remainder light crude oil, heavy crude oil and natural-gas condensate. Most of Canadian petroleum production is exported, approximately 482,525 cubic metres per day (3 Mbbl/d) in 2015, with almost all of the exports going to the United States. Canada is by far the largest single source of oil imports to the United States, providing 43% of US crude oil imports in 2015.

Enterprise Products Partners L.P. is an American midstream natural gas and crude oil pipeline company with headquarters in Houston, Texas. It acquired GulfTerra in September 2004. The company ranked No. 105 in the 2018 Fortune 500 list of the largest United States corporations by total revenue. Dan Duncan (1933–2010) was the majority owner.

Energy Transfer Partners is a company engaged in natural gas and propane pipeline transport. It is organized in Delaware and headquartered in Dallas, Texas. It was founded in 1995 by Ray Davis and Kelcy Warren, who remains Chairman and CEO. It owns a 36.4% interest in Dakota Access, LLC, the company responsible for developing the controversial Dakota Access Pipeline. 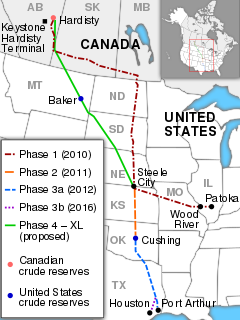 The Keystone Pipeline System is an oil pipeline system in Canada and the United States, commissioned in 2010 and owned by TC Energy and the Government of Alberta. It runs from the Western Canadian Sedimentary Basin in Alberta to refineries in Illinois and Texas, and also to oil tank farms and an oil pipeline distribution center in Cushing, Oklahoma. The pipeline became well known when a planned fourth phase, Keystone XL, attracted opposition from environmentalists, becoming a symbol of the battle over climate change and fossil fuels. In 2015 Keystone XL was temporarily delayed by then-President Barack Obama. On January 24, 2017, President Donald Trump took action intended to permit the pipeline's completion.

The Big Inch and Little Big Inch, collectively known as the Inch pipelines, are petroleum pipelines extending from Texas to New Jersey, built between 1942 and 1944 as emergency war measures in the U.S. Before World War II, petroleum products were transported from the oil fields of Texas to the north-eastern states by sea by oil tankers. After the United States entered the war on 1 January 1942, this vital link was attacked by German submarines in the Operation Paukenschlag, threatening both the oil supplies to the north-east and its onward transshipment to Great Britain. The Secretary of the Interior, Harold Ickes, championed the pipeline project as a way of transporting petroleum by the more-secure, interior route.

The Seaway Crude Pipeline System (SCPS), commonly known as the Seaway Pipeline, is an oil pipeline system which transports crude oil between Cushing, Oklahoma and Freeport, Texas, and through the Texas City, Texas Terminal and Distribution System on the Gulf Coast of the United States. The Seaway is an important crude oil transfer link between two petroleum regions within the United States.

Western Canadian Select (WCS) is a heavy sour blend of crude oil that is one of North America's largest heavy crude oil streams. It was established in December 2004 as a new heavy oil stream by EnCana, Canadian Natural Resources Limited, Petro-Canada and Talisman Energy Inc.. It is a heavy blended crude oil, composed mostly of bitumen blended with sweet synthetic and condensate diluents and 21 existing streams of both conventional and unconventional Alberta heavy crude oils at the large Husky Midstream General Partnership terminal in Hardisty, Alberta. Western Canadian Select—the benchmark for emerging heavy, acidic crudes—is one of many petroleum products from the Western Canadian Sedimentary Basin oil sands. Husky Energy joined the initial four Founders in 2015.

Double H Pipeline is a planned 462-mile (744 km) crude oil pipeline from Dore, North Dakota to Guernsey, Wyoming. It is supposed to carry 100,000 barrels of crude oil from the North Dakota and Bakken formation shale plays as well as Wyoming's oil fields.

The Pony Express Pipeline (PXP) is a 760-mile (1,220 km) pipeline connecting Guernsey, Wyoming with the oil hub of Cushing, Oklahoma. 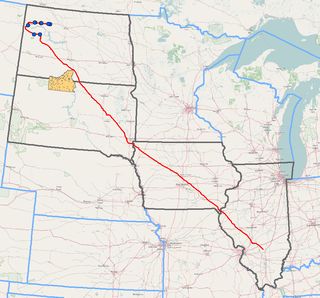 The Dakota Access Pipeline (DAPL) or Bakken pipeline is a 1,172-mile-long (1,886 km) underground oil pipeline in the United States. It begins in the shale oil fields of the Bakken formation in northwest North Dakota and continues through South Dakota and Iowa to an oil terminal near Patoka, Illinois. Together with the Energy Transfer Crude Oil Pipeline from Patoka to Nederland, Texas, it forms the Bakken system.

#NODAPL, also referred to as the Dakota Access Pipeline protests, is a Twitter hashtag and social media campaign for the struggle against the proposed and partially built Dakota Access Pipeline. The role social media played in this movement is so substantial that the movement itself is now often referred to by its hashtag: #NoDAPL. The hashtag reflected a grassroots campaign that began in early 2016 in reaction to the approved construction of the Dakota Access Pipeline in the northern United States. The Standing Rock Sioux and allied organizations took legal action aimed at stopping construction of the project, while youth from the reservation began a social media campaign which gradually evolved into a larger movement with dozens of associated hashtags. The campaign aimed to raise awareness on the threat of the pipeline on the sacred burial grounds as well as the quality of water in the area.