Trusts & Estates is a wealth management journal published by Informa which covers trust law and estates. It was first published in 1904 (as a periodical called Trust Companies) under the direction of Christian A. Luhnow, who was the editor, publisher and owner of the magazine at the time.

Today, Trusts & Estates publishes articles contributed by practitioners in the fields of estate planning and taxation, fiduciary professionals, family offices, insurance, investments, philanthropy, retirement benefits and valuations. According to trustsandestates.com, articles are generally peer-reviewed by an editorial advisory board. The journal is published 12 times per year with a Wealth Management Resource Guide bonus issue in December.

Christian A. Luhnow founded Trust Companies in March 1904 in response to the rise of the trust banking industry in the United States. Most of the 1,300 United States trust companies then in existence had been formed in the previous 25 years. Yet, according to the magazine back then, "no other financial institutions of comparatively recent growth have made such giant strides and at the same time are so little understood outside of those immediately interested."trusts in the 1800 were used as business techniques during the industrial growth these ways were often used by large companies

Arthur Betz Laffer is an American economist and author who first gained prominence during the Reagan administration as a member of Reagan's Economic Policy Advisory Board (1981–89). Laffer is best known for the Laffer curve, an illustration of the concept that there exists some tax rate between 0% and 100% that will result in maximum tax revenue for government. In certain circumstances, this would allow governments to cut taxes, and simultaneously increase revenue and economic growth.

A real estate investment trust (REIT) is a company that owns, and in most cases operates, income-producing real estate. REITs own many types of commercial real estate, ranging from office and apartment buildings to warehouses, hospitals, shopping centers, hotels and commercial forests. Some REITs engage in financing real estate.

A wealth tax is a tax on an entity's holdings of assets. This includes the total value of personal assets, including cash, bank deposits, real estate, assets in insurance and pension plans, ownership of unincorporated businesses, financial securities, and personal trusts. Typically, liabilities are deducted from an individual's wealth, hence it is sometimes called a net wealth tax. This is in contrast to other tax plans such as an income tax, which is in use by countries like the United States. Wealth taxation plans are in use in many countries around the world and seek to reduce the accumulation of wealth by individuals.

An income trust is an investment that may hold equities, debt instruments, royalty interests or real properties. They are especially useful for financial requirements of institutional investors such as pension funds, and for investors such as retired individuals seeking yield. The main attraction of income trusts is their stated goal of paying out consistent cash flows for investors, which is especially attractive when cash yields on bonds are low. Many investors are attracted by the fact that income trusts are not allowed to make forays into unrelated businesses: if a trust is in the oil and gas business it cannot buy casinos or motion picture studios.

High-net-worth individual (HNWI) is a term used by some segments of the financial services industry to designate persons whose investible wealth exceed a given amount. Typically, these individuals are defined as holding financial assets with a value greater than US$1 million.

Harris myCFO is the American wealth management unit of BMO Harris Bank serving high-net-worth individuals and families. In 2002, Harris acquired certain assets of myCFO, Inc., founded by James H. Clark, in a $30 million deal. Harris myCFO provides a variety of services including investment advisory and family office services. Harris myCFO managed over $18 billion in assets in 2011 and Forbes ranked the company seventh on a list of top fee-only investment advisors. 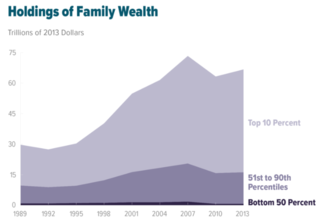 Deen Kemsley is an accounting professor and a Christian author. He earned a PhD in business and economics from the University of North Carolina at Chapel Hill in 1995. He then served on the faculty at Columbia Business School from 1995 to 2004, taking a one-year visit to Yale School of Management in 2003. He now teaches at the A.B. Freeman School of Business at Tulane University. In addition to his academic work, Professor Kemsley is the author of Trust in the Lord: Reflections of Jesus Christ.

The estate tax in the United States is a tax on the transfer of the estate of a deceased person. The tax applies to property that is transferred via a will or according to state laws of intestacy. Other transfers that are subject to the tax can include those made through an intestate estate or trust, or the payment of certain life insurance benefits or financial account sums to beneficiaries. The estate tax is one part of the Unified Gift and Estate Tax system in the United States. The other part of the system, the gift tax, applies to transfers of property during a person's life.

Bank of America Private Bank was founded in 1853 as the United States Trust Company of New York. It operated independently until 2000, when it was acquired by Charles Schwab, and Co. and subsequently sold to, and became a subsidiary of, Bank of America in 2007. U.S. Trust provides investment management, wealth structuring, and credit and lending services to clients.

Fiduciary Trust Company International is a United States-based wealth management firm that provides investment management and wealth management services. It has served high-net-worth families, foundations, and endowments since 1931. As of 2019, the firm had $71 billion in assets under administration and management, serving clients in 48 countries. The firm and its subsidiaries maintain offices in New York City, and several other locations.

Northwestern Mutual is an American financial services mutual organization based in Milwaukee. The financial security company provides consultation on wealth and asset income protection, education planning, retirement planning, investment advisory services, financial planning trust and private client services, estate planning and business planning. Its products include life insurance, permanent life insurance, disability income, and long-term care insurance; annuities; investments; and investment advisory products and services. Northwestern Mutual ranked No. 111 in the 2019 Fortune 500 list of the largest United States corporations by total revenue and is currently ranked No. 102 by total revenue and is in the top 50 by assets held. The firm distributes a portion of its earnings to eligible policyholders as annual dividends.

Real estate in Panama is about how the Republic of Panama's real estate industry has grown since 2006, as foreign investments helped to fuel Panama's economy and housing market. 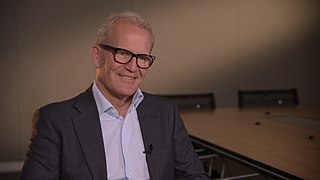 Dag Detter is a Swedish investment advisor, as well as an author and speaker on the topic of public commercial assets. He is the former President of Stattum and Director at the Swedish Ministry of Industry, leading the restructuring of the government portfolio of public assets during the reforms 1998-2001.