She was the daughter of Zwide kaLanga, the senior wife of Sobhuza I of Swaziland, and the mother of Mswati II of Swaziland. [1]

Artifacts indicating human activity dating back to the early Stone Age have been found in the Kingdom of Eswatini. Prehistoric rock art paintings date from c. 25,000 B.C. and continuing up to the 19th century can be found in various places around the country. The earliest known inhabitants of the region were Khoisan hunter-gatherers. Later, the population became predominantly Nguni during and after the great Bantu migrations. People speaking languages ancestral to the current Sotho and Nguni languages began settling no later than the 11th century. The country now derives its name from a later king named Mswati II. Ngwane, named for Ngwane III, is an alternative name for Swaziland the surname of whose royal house remains Nkhosi Dlamini. Nkhosi literally means "king". Mswati II was the greatest of the fighting kings of Eswatini, and he greatly extended the area of the country to twice its current size. The people of Eswatini largely belong to a number of clans that can be categorized as Emakhandzambili, Bemdzabu, and Emafikamuva, depending on when and how they settled in Eswatini. 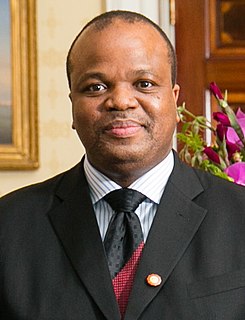 Mswati III is the king of Eswatini and head of the Swazi Royal Family. He was born in Manzini in the Protectorate of Swaziland to King Sobhuza II and one of his younger wives, Ntfombi Tfwala. He was crowned as Mswati III, Ingwenyama and King of Swaziland, on 25 April 1986 at the age of 18, thus becoming the youngest ruling monarch in the world at that time. Together with his mother, Ntfombi Tfwala, now Queen Mother (Ndlovukati), he rules the country as an absolute monarch. Mswati III is known for his practice of polygyny and currently has 15 wives. Although he is respected and fairly popular in Eswatini, his policies and lavish lifestyle have led to local protests and international criticism. Mswati III was also secretly funded and supported by the government of apartheid-era South Africa.

Eswatini is divided into four regions: Hhohho, Lubombo, Manzini, and Shiselweni. Each region is further divided into tinkhundla. There are 55 tinkhundla in Swaziland and each elects one representative to the House of Assembly of Eswatini. Tinkhundla are, in turn, divided into smaller imiphakatsi.

Sobhuza II, KBE was the Paramount Chief and later Ngwenyama of Swaziland for 82 years and 254 days, the longest verifiable reign of any monarch in recorded history. Sobhuza was born on 22 July 1899 at Zombodze Royal Residence, the son of Inkhosikati Lomawa Ndwandwe and King Ngwane V. When he was only four months old, his father died suddenly while dancing incwala. Sobhuza was chosen king soon after that and his grandmother Labotsibeni and his uncle Prince Malunge led the Swazi nation until his maturity in 1921. Sobhuza led Swaziland through independence until his death in 1982. He was succeeded by Mswati III, his young son with Inkhosikati Ntfombi Tfwala, who was crowned in 1986.

Labotsibeni Mdluli, also known as Gwamile, was the Queen Mother and Queen Regent of Swaziland.

Sobhuza I was king of Eswatini, from 1815 to 1836. Born around 1780, his father was Ndvungunye, and his mother was Somnjalose Simelane. He was called Somhlolo, "the Wonder," upon his birth because his father Ndvungunye died as a result of being struck by lightning. When Sobhuza was king, Lojiba Simelane instead of his mother Somnjalose was Queen Mother because Somnjalose was an inhlanti or support bride to Lojiba. Somhlolo is a greatly revered king of Eswatini. He had his first royal capital or kraal at Zombodze in the Shiselweni region, but moved it north to new Zombodze in central Eswatini. Swazis celebrate Somhlolo Day every September 6 as their Independence Day and the national stadium is named Somhlolo stadium. Sobhuza was succeeded by his son Mswati II and his wife Tsandzile Ndwandwe as Queen Mother after a short regency by Queen Lojiba Simelane. Sobhuza by the time of his death had conquered a country claimed to reach to modern day Barberton in the north, Carolina in the west, Pongola River in the south and Lubombo Mountains in the east.

Eswatini first participated at the Olympic Games in 1972. They missed the next two games but returned for the 1984 Olympics in Los Angeles and have appeared in all the games since then. They made their first and only appearance at the Winter Olympics in 1992. In all competitions they have yet to win a medal.

Hilda Beemer Kuper was a social anthropologist most notable for her extensive work on Swazi culture.

This is a survey of the postage stamps and postal history of Eswatini, formerly Swaziland.

laNgolotsheni (Lomawa) Ndwandwe was the Ndlovukati of Swaziland, the wife of King Ngwane V, and the mother of King Sobhuza II. 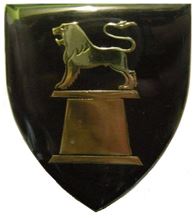 Cannabis in Eswatini (Swaziland) is illegal; the herb is referred to as insangu in Swazi. The local strain is known as "Swazi gold" and commands a high price due to its reputation for potency. 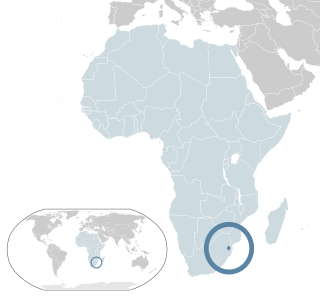 The history of the Jews of Eswatini, formerly Swaziland.