The Tsirelson bounds are named after Boris S. Tsirelson (or Cirel'son, in a different transliteration), the author of the article [1] in which the first one was derived.

Bound for the CHSH inequality

The first Tsirelson bound was derived as an upper bound on the correlations measured in the CHSH inequality. It states that if we have four (Hermitian) dichotomic observables

(i.e., two observables for Alice and two for Bob) with outcomes

For comparison, in the classical case (or local realistic case) the upper bound is 2, whereas if any arbitrary assignment of

is allowed, it is 4. The Tsirelson bound is attained already if Alice and Bob each makes measurements on a qubit, the simplest non-trivial quantum system.

Several proofs of this bound exist, but perhaps the most enlightening one is based on the Khalfin–Tsirelson–Landau identity. If we define an observable

, i.e., if the observables' outcomes are

, which can be regarded as the classical case, it already follows that

. In the quantum case, we need only notice that

, and the Tsirelson bound

Tsirelson also showed that for any bipartite full-correlation Bell inequality with m inputs for Alice and n inputs for Bob, the ratio between the Tsirelson bound and the local bound is at most

is the Grothendieck constant of order d. [2] Note that since

, this bound implies the above result about the CHSH inequality.

In general, obtaining a Tsirelson bound for a given Bell inequality is a hard problem that has to be solved on a case-by-case basis. It is not even known to be decidable. The best known computational method for upperbounding it is a convergent hierarchy of semidefinite programs, the NPA hierarchy, that in general does not halt. [3] [4] The exact values are known for a few more Bell inequalities:

For the Braunstein–Caves inequalities we have that

For the WWŻB inequalities the Tsirelson bound is

Significant research has been dedicated to finding a physical principle that explains why quantum correlations go only up to the Tsirelson bound and nothing more. Three such principles have been found: no-advantage for non-local computation, [7] information causality [8] and macroscopic locality. [9] That is to say, if one could achieve a CHSH correlation exceeding Tsirelson's bound, all such principles would be violated. Tsirelson's bound also follows if the Bell experiment admits a strongly positive quansal measure. [10]

There are two different ways of defining the Tsirelson bound of a Bell expression. One by demanding that the measurements are in a tensor product structure, and another by demanding only that they commute. Tsirelson's problem is the question of whether these two definitions are equivalent. More formally, let

be a Bell expression, where

is the probability of obtaining outcomes

. The tensor product Tsirelson bound is then the supremum of the value attained in this Bell expression by making measurements

. Tsirelson's problem is the question of whether for all Bell expressions

This question was first considered by Boris Tsirelson in 1993, where he asserted without proof that

. [12] Upon being asked for a proof by Antonio Acín in 2006, he realized that the one he had in mind didn't work, [13] and issued the question as an open problem. [14] Together with Miguel Navascués and Stefano Pironio, Antonio Acín had developed an hierarchy of semidefinite programs, the NPA hierarchy, that converged to the commuting Tsirelson bound

from above, [4] and wanted to know whether it also converged to the tensor product Tsirelson bound

, the most physically relevant one.

Since one can produce a converging sequencing of approximations to

from below by considering finite-dimensional states and observables, if

, then this procedure can be combined with the NPA hierarchy to produce a halting algorithm to compute the Tsirelson bound, making it a computable number (note that in isolation neither procedure halts in general). Conversely, if

is not computable, then

. In January 2020, Ji, Natarajan, Vidick, Wright, and Yuen claimed to have proven that

Bell's theorem is a term encompassing a number of closely-related results in physics, all of which determine that quantum mechanics is incompatible with local hidden-variable theories. The "local" in this case refers to the principle of locality, the idea that a particle can only be influenced by its immediate surroundings, and that interactions mediated by physical fields can only occur at speeds no greater than the speed of light. "Hidden variables" are hypothetical properties possessed by quantum particles, properties that are undetectable but still affect the outcome of experiments. In the words of physicist John Stewart Bell, for whom this family of results is named, "If [a hidden-variable theory] is local it will not agree with quantum mechanics, and if it agrees with quantum mechanics it will not be local."

In physics, the CHSH inequality can be used in the proof of Bell's theorem, which states that certain consequences of entanglement in quantum mechanics can not be reproduced by local hidden variable theories. Experimental verification of violation of the inequalities is seen as experimental confirmation that nature cannot be described by local hidden variables theories. CHSH stands for John Clauser, Michael Horne, Abner Shimony, and Richard Holt, who described it in a much-cited paper published in 1969. They derived the CHSH inequality, which, as with John Bell's original inequality, is a constraint on the statistics of "coincidences" in a Bell test which is necessarily true if there exist underlying local hidden variables. This constraint can, on the other hand, be infringed by quantum mechanics. 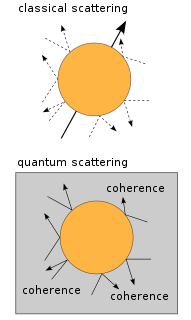 In quantum physics, a measurement is the testing or manipulation of a physical system to yield a numerical result. The predictions that quantum physics makes are in general probabilistic. The mathematical tools for making predictions about what measurement outcomes may occur were developed during the 20th century and make use of linear algebra and functional analysis.

Quantum error correction (QEC) is used in quantum computing to protect quantum information from errors due to decoherence and other quantum noise. Quantum error correction is theorised as essential to achieve fault-tolerant quantum computation that can reduce the effects of noise on stored quantum information, faulty quantum gates, faulty quantum preparation, and faulty measurements.

In theoretical physics, quantum nonlocality refers to the phenomenon by which the measurement statistics of a multipartite quantum system do not admit an interpretation in terms of a local realistic theory. Quantum nonlocality has been experimentally verified under different physical assumptions. Any physical theory that aims at superseding or replacing quantum theory should account for such experiments and therefore cannot fulfill local realism; quantum nonlocality is a property of the universe that is independent of our description of nature.

In non-equilibrium physics, the Keldysh formalism is a general framework for describing the quantum mechanical evolution of a system in a non-equilibrium state or systems subject to time varying external fields. Historically, it was foreshadowed by the work of Julian Schwinger and proposed almost simultaneously by Leonid Keldysh and, separately, Leo Kadanoff and Gordon Baym. It was further developed by later contributors such as O. V. Konstantinov and V. I. Perel.

Amplitude amplification is a technique in quantum computing which generalizes the idea behind the Grover's search algorithm, and gives rise to a family of quantum algorithms. It was discovered by Gilles Brassard and Peter Høyer in 1997, and independently rediscovered by Lov Grover in 1998.

The theory of causal fermion systems is an approach to describe fundamental physics. It provides a unification of the weak, the strong and the electromagnetic forces with gravity at the level of classical field theory. Moreover, it gives quantum mechanics as a limiting case and has revealed close connections to quantum field theory. Therefore, it is a candidate for a unified physical theory. Instead of introducing physical objects on a preexisting spacetime manifold, the general concept is to derive spacetime as well as all the objects therein as secondary objects from the structures of an underlying causal fermion system. This concept also makes it possible to generalize notions of differential geometry to the non-smooth setting. In particular, one can describe situations when spacetime no longer has a manifold structure on the microscopic scale. As a result, the theory of causal fermion systems is a proposal for quantum geometry and an approach to quantum gravity.