UCSD Pascal is a Pascal programming language system that runs on the UCSD p-System, a portable, highly machine-independent operating system. UCSD Pascal was first released in 1977. It was developed at the University of California, San Diego (UCSD).

UCSD Pascal and the p-System

In 1977, the University of California, San Diego (UCSD) Institute for Information Systems developed UCSD Pascal to provide students with a common environment that could run on any of the then available microcomputers as well as campus DEC PDP-11 minicomputers. The operating system became known as UCSD p-System.

UCSD p-System was one of three operating systems, along with PC DOS and CP/M-86, that IBM offered for its original IBM PC. [1] Vendor SofTech Microsystems [2] emphasized p-System's application portability, with virtual machines for 20 CPUs as of the IBM PC's release. It predicted that users would be able to use applications they purchased on future computers running p-System; [3] advertisements called it "the Universal Operating System". [4]

PC Magazine denounced UCSD p-System on the IBM PC, stating in a review of Context MBA, written in the language, that it "simply does not produce good code". [5] The p-System did not sell very well for the IBM PC, because of a lack of applications and because it was more expensive than the other choices. Previously, IBM had offered the UCSD p-System as an option for Displaywriter, an 8086-based dedicated word processing machine (not to be confused with IBM's DisplayWrite word processing software). (The Displaywriter's native operating system had been developed completely internally and was not opened for end-user programming.)

Notable extensions to standard Pascal include separately compilable Units and a String type. Both of these extensions influenced the design of the Ada language. [6] Some intrinsics were provided to accelerate string processing (e.g. scanning in an array for a particular search pattern); other language extensions were provided to allow the UCSD p-System to be self-compiling and self-hosted.

UCSD Pascal was based on a p-code machine architecture. Its contribution to these early virtual machines was to extend p-code away from its roots as a compiler intermediate language into a full execution environment.[ clarification needed ] The UCSD Pascal p-Machine was optimized for the new small microcomputers with addressing restricted to 16-bit (only 64 KB of memory). James Gosling cites UCSD Pascal as a key influence (along with the Smalltalk virtual machine) on the design of the Java virtual machine. [7]

UCSD p-System achieved machine independence by defining a virtual machine, called the p-Machine (or pseudo-machine, which many users began to call the "Pascal-machine" like the OS—although UCSD documentation always used "pseudo-machine") with its own instruction set called p-code (or pseudo-code). Urs Ammann, a student of Niklaus Wirth, originally presented a p-code in his PhD thesis, [8] from which the UCSD implementation was derived, the Zurich Pascal-P implementation. The UCSD implementation changed the Zurich implementation to be "byte oriented". The UCSD p-code was optimized for execution of the Pascal programming language. Each hardware platform then only needed a p-code interpreter program written for it to port the entire p-System and all the tools to run on it. Later versions also included additional languages that compiled to the p-code base. For example, Apple Computer offered a Fortran Compiler [9] (written by Silicon Valley Software, Sunnyvale California) producing p-code that ran on the Apple version of the p-system. Later, TeleSoft (also located in San Diego) offered an early Ada development environment that used p-code and was therefore able to run on a number of hardware platforms including the Motorola 68000, the System/370, and the Pascal MicroEngine.

The UCSD Pascal compiler was distributed as part of a portable operating system, the p-System.

UCSD p-System began around 1974 as the idea of UCSD's Kenneth Bowles, [6] who believed that the number of new computing platforms coming out at the time would make it difficult for new programming languages to gain acceptance. He based UCSD Pascal on the Pascal-P2 release of the portable compiler from Zurich. He was particularly interested in Pascal as a language to teach programming. UCSD introduced two features that were important improvements on the original Pascal: variable length strings, and "units" of independently compiled code (an idea included into the then-evolving Ada programming language). Niklaus Wirth credits the p-System, and UCSD Pascal in particular, with popularizing Pascal. It was not until the release of Turbo Pascal that UCSD's version started to slip from first place among Pascal users.

The Pascal dialect of UCSD Pascal came from the subset of Pascal implemented in Pascal-P2, which was not designed to be a full implementation of the language, but rather "the minimum subset that would self-compile", to fit its function as a bootstrap kit for Pascal compilers. UCSD added strings from BASIC, and several other implementation dependent features. Although UCSD Pascal later obtained many of the other features of the full Pascal language, the Pascal-P2 subset persisted in other dialects, notably Borland Pascal, which copied much of the UCSD dialect.

Original version, never officially distributed outside of the University of California, San Diego. However, the Pascal sources for both Versions I.3 and I.5 were freely exchanged between interested users. Specifically, the patch revision I.5a was known to be one of the most stable.

Custom version written for Western Digital to run on their Pascal MicroEngine microcomputer. Included support for parallel processes for the first time.

Commercial version, developed and sold by SofTech. Based on Version II; did not include changes from Version III. Did not sell well due to combination of their pricing structure, performance problems due to p-code interpreter, and competition with native operating systems (on top of which it often ran). After SofTech dropped the product, it was picked up by Pecan Systems, a relatively small company formed of p-System users and fans. Sales revived somewhat, due mostly to Pecan's reasonable pricing structure, but the p-System and UCSD Pascal gradually lost the market to native operating systems and compilers. Available for the TI-99/4A equipped with p-code card and Commodore PET.

The Corvus Systems computer used UCSD pascal for all its user software. The "innovative concept" of the Constellation OS was to run Pascal (interpretively or compiled) and include all common software in the manual, so users could modify as needed while using (open source was the default in that era). 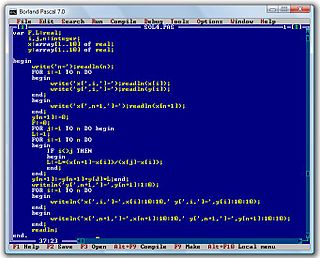 In computer programming, a p-code machine, or portable code machine is a virtual machine designed to execute p-code. This term is applied both generically to all such machines, and to specific implementations, the most famous being the p-Machine of the Pascal-P system, particularly the UCSD Pascal implementation.

In computing, a virtual machine (VM) is an emulation of a computer system. Virtual machines are based on computer architectures and provide functionality of a physical computer. Their implementations may involve specialized hardware, software, or a combination.

Turbo Pascal is a software development system that includes a compiler and an integrated development environment (IDE) for the Pascal programming language running on CP/M, CP/M-86, and DOS. It was originally developed by Anders Hejlsberg at Borland, and was notable for its extremely fast compiling times. Turbo Pascal, and the later but similar Turbo C, made Borland a leader in PC-based development. 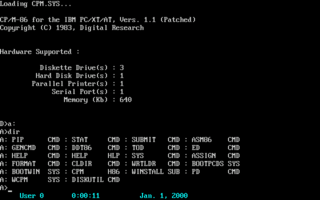 Bytecode, also termed portable code or p-code, is a form of instruction set designed for efficient execution by a software interpreter. Unlike human-readable source code, bytecodes are compact numeric codes, constants, and references that encode the result of compiler parsing and performing semantic analysis of things like type, scope, and nesting depths of program objects.

The Business Operating System, or BOS, was initially developed as an early cross-platform operating system, originally produced for Intel 8080 and Motorola 6800 computers, then redeveloped for actual businesses and business models. The technology began subsequently for Zilog Z80-based computers, and then later for most microcomputers of the 1980s, then developed into a premium automated software solution for Investors and Asset Managers alike. CAP Ltd, a British company and at the time one of the world's largest Information Technology consulting firms, developed BOS. CAP designed BOS and BOS applications for platform-independence.

Object Pascal is an extension to the programming language Pascal that provides object-oriented programming features such as classes and methods.

Write once, run anywhere (WORA), or sometimes Write once, run everywhere (WORE), was a slogan created by Sun Microsystems to illustrate the cross-platform benefits of the Java language. Ideally, this meant that a Java program could be developed on any device, compiled into a standard bytecode, and be expected to run on any device equipped with a Java virtual machine (JVM). The installation of a JVM or Java interpreter on chips, devices, or software packages became an industry standard practice.

JRT is an implementation of the Pascal programming language. It was available in the early 1980s on the CP/M operating system.

Alpha Microsystems is a computer company founded in 1977 by John French, Dick Wilcox and Bob Hitchcock. The first Alpha Micro computer was the S-100 AM-100, based upon the WD16 microprocessor chipset from Western Digital. Later computers starting with the AM-100/L and the AM-1000 were based on the Motorola 68000 and succeeding processors, though Alpha Micro swapped several addressing lines to create byte-ordering compatibility with their earlier processor.

The Pascal MicroEngine was a series of microcomputer products manufactured by Western Digital from 1979 through the mid-1980s, designed specifically to run the UCSD p-System efficiently. Compared to other microcomputers, which ran a machine language p-code interpreter, the Pascal Microengine had its interpreter implemented in microcode. So, p-code was, effectively, its native machine language.

XPL0 is a computer programming language that is essentially a cross between Pascal and C. It was created in 1976 by Peter J. R. Boyle who wanted a high-level language for his microcomputer and wanted something more sophisticated than BASIC, which was the dominant language for personal computers at the time.

Kenneth L. "Ken" Bowles was an American computer scientist best known for his work in initiating and directing the UCSD Pascal project, when he was a professor of computer science at the University of California, San Diego (UCSD).

TeleSoft, Inc. was an American software development company founded in 1981 and based in San Diego, California, that specialized in development tools for the Ada programming language.

The Byte Sieve is a computer-based implementation of the Sieve of Eratosthenes published by Byte as a programming language performance benchmark. It first appeared in the September 1981 edition of the magazine and was revisited on occasion. Although intended to compare the performance of different languages on the same computers, it quickly became a widely used machine benchmark.