Udal is the name of a legendary 12th century general who appears in the Alha-Khand epic. [1] In the epic, Udal and his brother Alha serve in the army of the Chandela king Paramardi Deva (also known as Parmal or Parimal) of Mahoba. They belonged to the Banaphar clan, which are of mixed Ahir and Rajput descent. [2] [3]

According to the Alha-Khand, Udal was born after the death of his father Dassraj, who was also a general, and was killed in the service of king Paramardi. The king subsequently raised Udal as his own son. [4] The epic describes how Udal was killed while fighting the invading army of Rai Pithora, also known as Prithviraj Chauhan, in a large battle at Mahoba; while the content of the ballads has been embellished, the battle has been attested by stone inscriptions at Madanpur, and took place at some point in 1182-1183. [5]

Bundeli is an Indo-Aryan language spoken in the Bundelkhand region of central India. It belongs to the Central Indo-Ayran languages and is part of the Western Hindi subgroup.

Rajput is a large multi-component cluster of castes, kin bodies, and local groups, sharing social status and ideology of genealogical descent originating from the Indian subcontinent. The term Rajput covers various patrilineal clans historically associated with warriorhood: several clans claim Rajput status, although not all claims are universally accepted. According to modern scholars, almost all Rajputs clans originated from peasant or pastoral communities. 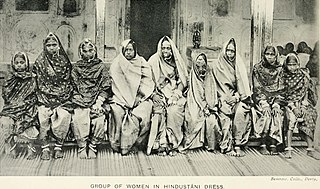 Kurmi is traditionally a cultivator caste in the lower Gangetic plain of India, especially southern regions of Awadh, eastern Uttar Pradesh and large parts of Bihar. 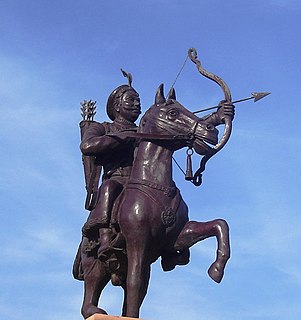 Prithviraja III, popularly known as Prithviraj Chauhan or Rai Pithora was a king from the Chahamana (Chauhan) dynasty. He ruled Sapadalaksha, the traditional Chahamana territory, in present-day north-western India. He controlled much of the present-day Rajasthan, Haryana, and Delhi; and some parts of Punjab, Madhya Pradesh and Uttar Pradesh. His capital was located at Ajayameru. 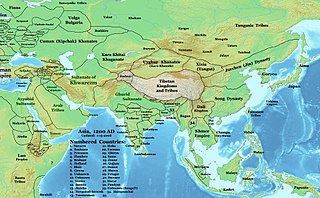 The Chandelas of Jejakabhukti were a Rajput dynasty in Central India. They ruled much of the Bundelkhand region between the 9th and the 13th centuries. 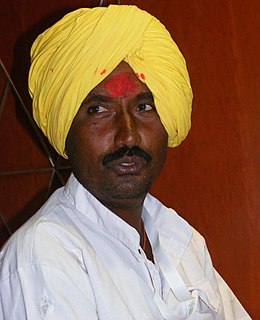 Dhangar is a herding caste of people found in the Indian states of Maharashtra, Karnataka, Goa, Madhya Pradesh and Uttar Pradesh. They are referred as Gavli in southern Maharashtra, Goa and northern Karnataka, and Ahir in northern Maharashtra. Some Gavlis live in forested hill tracts of India's Western Ghats. Gavli, also known as Dange or Mhaske, and Ahir are a sub-caste of Dhangar. However, there are many distinct Gavli castes in Maharashtra and Dhangar Gavli is one of them.

Chunar is a town located in Mirzapur District of the Indian state of Uttar Pradesh. The railway tracks passing through Chunar railway station leads to major destinations of India, including Howrah, Delhi, Tatanagar and Varanasi. National Highway number 35 also passes through Chunar. It is connected to the city of Varanasi by roads and rails. Chunar is well known for its handicraft products made from clay and plaster of paris as well as the Chunar Fort.

Banaphar, also spelled Banafar and Banafer, is a clan native to the Indian subcontinent of mixed Ahir and Rajput descent.

Alha was a legendary general of the Chandel king Paramardideva, who fought Prithviraj Chauhan in 1182 CE, immortalised in the Alha-Khand ballad. 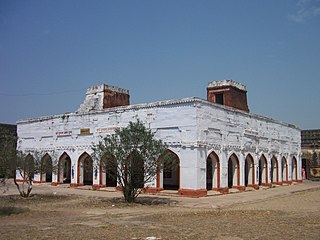 The term Alha Khand is used to refer to poetic works in Hindi which consists of a number of ballads describing the brave acts of two 12th century Banaphar heroes, Alha and Udal, generals working for king Paramardi-Deva (Parmal) of Mahoba against the attacker Prithviraj Chauhan of Delhi. The works has been entirely handed down by oral tradition and presently exists in many recensions, which differ from one another both in language and subject matter. The Bundeli, Bagheli, Awadhi, Bhojpuri, Maithili, and Kannauji recensions are the most well known among these.

Yadav refers to a grouping of traditionally mainly non-elite, peasant-pastoral communities or castes in India that since the 19th and 20th centuries have claimed descent from the mythological king Yadu as a part of a movement of social and political resurgence.

Thakur is a historical feudal title of the Indian subcontinent. It is also used as a surname in the present day. The female variant of the title is Thakurani or Thakurain, and is also used to describe the wife of a Thakur.

The legend of Veer Lorik, sometimes known as the Lorikayan, is part of the Bhojpuri folklore of Bihar and eastern Uttar Pradesh, India. According to S.M. Pandey, it is considered to be the Ramayana by people of the Ahir Caste. Veer Lorik is a divine character of the legend of the Ahir (Yadav) caste of eastern Uttar Pradesh. Lorikayan, or the legend of Lorik, is a policy tale of the Bhojpuri language. It is given the status of Ramayana of Ahir caste. Veer Lorik Stone, standing on the banks of the Son River in the Sonbhadra district of Uttar Pradesh, contains a love story. 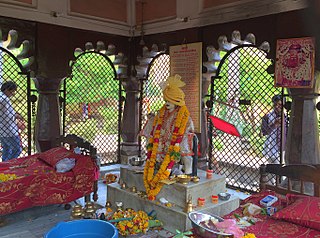 Dinman Hardoul Singh or Lala Hardoul is a Hindu folk deity of Bundelkhand in India. He was the prince of Orchha and the son of maharaja Vir Singh Deo and the brother of Jhujhar Singh. He was born in 1664 and died in 1688 at the age of 24. A temple of Hardoul in Bundelkhand is a centre for pilgrims and according to local beliefs he is still alive and is worshipped as a deity.

The Chudasama dynasty ruled parts of the present-day Saurashtra region of Gujarat state in India between the 9th and 15th centuries. Their capital was based in Junagadh and Vamanasthali, and they were later classified among the Rajput clans. They claimed to be of Lunar race from which the deity Krishna sprung.

Paramardi was a king of the Chandela dynasty of central India. He was the last powerful Chandela king, and ruled the Jejakabhukti region. Around 1182-1183 CE, he was defeated by Prithviraj Chauhan, who raided the Chandela capital Mahoba. Paramardi managed to recover the Chandela power over the next few years, but was defeated by the Ghurid general Qutb al-Din Aibak around 1202-1203 CE.

Gajaraja, also known as Mahipala, was an early Chudasama king known only from the ballads and folklore of Saurashtra region of Gujarat, India. 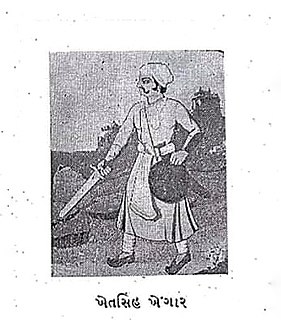 Garh Kundar Naresh Maharaja Khet Singh Khangar was the ruler of the Khangar Dynasty. He was born in the royal family of the King of Junagadh in the state of Gujarat (Saurashtra), India in 1197.