Ukrainian Engineering Pedagogics Academy is a Ukrainian academy in Kharkiv.

24 January 1958 – the foundation of UEPA, it was founded firstly as Ukrainian Extramural Polytechnic Institute (UEPI)

Oles Honchar Dnipro National University is an establishments of higher education in Ukraine. It was founded in 1918. The first four faculties were history and linguistics, law, medicine and physics and mathematics. 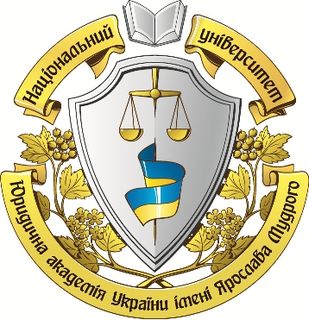 The Yaroslav Mudryi National Law University is a self-governing (autonomous) state higher law educational establishment of the IV level of accreditation, a national university, located in Kharkiv, Ukraine, named after Yaroslav the Wise.

Ivan Vakarchuk is a Ukrainian physicist. From 1990 to 2007 and again between 2010 and 2013 he was Rector of the Lviv University. In 2007–2010 he was Minister of Education and Science of Ukraine. Hero of Ukraine. Father of the leader of the rock band "Okean Elzy" Svyatoslav Vakarchuk.

The Vinnytsia State Pedagogical University named after Mykhailo Kotsiubynsky is a university located in Vinnytsia, Ukraine. Created in 1912. 33 doctors and 30 professors work there.

The National University of Food Technologies is a Ukrainian university located in Kiev, the capital of Ukraine.

Kharkiv State Academy of Culture is a Ukrainian public academy in Kharkiv.

Kharkiv State University of Food Technology and Trade is a Ukrainian university in Kharkiv.

Kharkiv National Automobile and Highway University is a Ukrainian university in Kharkiv.

Ukrainian medical Lyceum at Bogomolets National Medical University pursuant to its Charter is the state secondary establishment of general education that provides with acquisition of education over state educational minimum, carries out pre-professional education of youth, prepares it to study at higher medical (pharmaceutical) school and to work at health care establishments as junior medical staff.

Kharkiv Medical Academy of Post-graduate Education is a Ukrainian university in Kharkiv.

Vitalii Semenovych Kurylo is a Ukrainian politician. He is the People's deputy of Ukraine, and Chairman of the Supervisory Council of the University of Luhansk.