Ulla Plener was born in Berlin, a month after the Nazi Party took power in Germany. The Communist Party, of which her parents Kurt and Marie-Luise Plener were both active members, was an early focus of the Nazi drive to create a one party dictatorship. With their new baby the Pleners had to escape to Copenhagen after Kurt Plener  [ de ] (1905-1980) displeased the authorities with an article he contributed to a Communist Party newspaper in which he explained "how to use sports training as a defence against Nazis" ("... wie man sich sportlich ertüchtigen kann, um gegen Nazis wehrhaft zu sein"). [2] The family was now split up. Kurt remained, for the time being, in Copenhagen where he worked for the communist "Red Sport International" organisation and campaigned unsuccessfully for the reversal of the 1931 decision to hold the 1936 Olympic Games in Berlin. Marie-Louise took her daughter to Moscow. In 1940 Marie-Luise Plener  [ de ] (1909-1996) joined the French resistance. Her six and a half year old daughter and Ulla's younger brother were consigned to a children's home in Ivanovo, a textiles town to the north-east of Moscow. [3] Children at the nursery came from 34 different countries: the common feature was that their parents were all "politically active." [2] Plener later recalled that they were remarkably well informed about Nazi wartime atrocities, partly because some of the children had themselves, with their families, experienced them. [2] Meals were regular if meagre: although starvation was widespread in the Soviet Union during the war, the children at the International Red Aid children's home in Ivanovo never starved. [2]

It was only some time after the war ended that the family were reunited in Berlin.Between 1951 and 1956 Ulla Pleiner studied History at a Moscow university. [4] She received her doctorate ("Promotion A" under the reconfiguration of academic qualifications introduced in East Germany in 1968) in (East) Berlin in 1969 and her habilitation ("Promotion B") in 1975 for work on the history of the Social Democratic Party between 1945 and 1949. Her dissertation was later published in a shortened version under the title "SPD 1945–1949. Konzeption, Praxis, Ergebnisse". [5] She became a lecturer and head of research at the "Institute for Researching Imperialism", part of the Party Central Committee's Academy for Social Sciences. [6]

"If mainstream opinion in Germany were really to take an interest in the diversity of the anti-fascist wartime resistance and, at the same time, of how critically and self-critically communists deal with its history - including that of communists involved in anti-fascist resistance, then the historian Ulla Plener would be a best seller, included on the lists of the big publishing houses. Her audiences would not be limited to small conferences of academic experts, but would include radio and television listeners. Yet she does her remarkable work almost in secret, without payment from anyone, and is published by niche publishers to whom the word "profit" is foreign. What is special about Ulla Plener's work is the way her analyses connect the general history of the labour movement with the destinies of individuals. Daily human drudgery is thrown into the ring together with the dramatic class struggles of twentieth century capitalism and the appalling manifestations of Stalinism in a single unblinking vision, between which the relationships are handled with care and balance."

The Soviet occupation zone which, in the region surrounding Berlin, replaced Nazi Germany in 1945, was itself relaunched, in October 1949, as the Soviet sponsored German Democratic Republic. Further political changes followed rapidly in 1989/90, leading to German reunification, formally in October 1990. Following reunification Ulla Plener continued with her studies of the Social Democratic movement in Germany during the later 1940s, publishing biographical studies of the trades union leader Theodor Leipart [8] and the postwar SPD and of the party leader Kurt Schumacher. [9] Closely linked with these was her more theoretical research on the theory and practice of "economic democracy". [10]

Another of her research themes following reunification was the wartime French resistance, producing biographical studies of various German women active in the French resistance and a full biography of one of these: her own mother, Marie-Luise Plener-Huber. [2]

Something that would have been impossible before 1989 was Plener's contribution on the Stalin years in Moscow. In 1997 she published "Frauenschicksale unter Stalin" ("The fate of women under Stalin") which was followed nine years later by a "Gedenkband über deutsche Opfer des Großen Terrors in der Sowjetunion" ("Memorial volume on German victims of the Great Terror inside the Soviet Union"). [11] Some of the victims whose fates were set out in this volume were people whose disappearance had, hitherto, been unexplained. The theme of Stalin's purges was one in which Plener had a personal interest. When she was living in Moscow as a very small child with her mother, her paternal grandparents had also been living as political refugees in the city. Her law abiding paternal grandfather was arrested and shot in 1937. [3] Three years later, in 1940, the Soviets returned her grandmother to Nazi Germany following conclusion of the Molotov–Ribbentrop non-aggression Pact. [3] Other relatives suffered, and Ulla's mother, Marie-Luise Plener herself came under suspicion. [3]

She followed this up in 2009 with a biography of Mirko Beer, supported with photographs and documentation covering his time as a military doctor with the republican fighters during the Spanish Civil War. [12] Also of interest is her publication in a single volume of previously unknown diaries and letters covering the final years of his life, 1929-1933, written by the so-called "Communist bandit" or "Red Robin Hood", Max Hoelz. [13] [14] 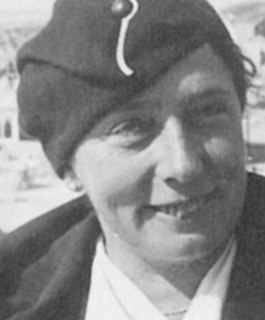 Johanna "Hanna" Kirchner was a German opponent of the Nazi régime.

Kurt Gebhard Adolf Philipp Freiherr von Hammerstein-Equord was a German general (Generaloberst) who served for a period as Commander-in-Chief of the Reichswehr. He is regarded as "an undisguised opponent" of Adolf Hitler and the Nazi regime.

Elisabeth Schumacher was a German graphic artists and photographer. She was a member of the Berlin based anti-fascist resistance group that was later called the Red Orchestra by the Abwehr, during the Third Reich. Schumacher also trained as an artist before joining the resistance efforts.

Felix Fechenbach was a German-Jewish journalist, poet and political activist. He served as State-Secretary in the Socialist/Communist regime of Kurt Eisner that overthrew the Bavarian Wittelsbach Monarchy. After its overthrow, he worked as a newspaper editor during the Weimar period. After the Nazi seizure of power, he was arrested and later executed.

Heinz Kamnitzer was a German writer and historian. He was part of the political-cultural establishment and a vocal government supporter in the German Democratic Republic.

Luise Kraushaar was a German political activist who became a Resistance campaigner against National Socialism and who also, after she left Germany, worked in the French Resistance. She later became a historian, employed at Berlin's Marxism–Leninism Institute in the German Democratic Republic.

Roberta Gropper was a German Communist political activist who became a member of the Reichstag in 1930. In 1934 she fled to the Soviet Union where she fell victim to party factionalism and spent more than three years in a concentration camp: this was followed by a Siberian exile. She was able to return to Berlin in 1947 and became a mainstream politician in the German Democratic Republic .

Willy Leow was a German communist politician and activist.

Käthe Dahlem was a German political activist who, after being forced into exile, became an anti-fascist Resistance activist, participating in the Spanish Civil War and, subsequently, again based in France. After 1945 she became a public official in the Soviet occupation zone. She was retired on health grounds in July 1949 and was subsequently caught up in her husband's difficulties with the ruling party, the party first secretary, Walter Ulbricht and other leading party comrades who had spent the war years in Moscow. By the 1960s, however, the authorities were happy to honour her pre-war and wartime contribution.

Oskar Huth was many things: organ builder, graphic artist, a pianist with a rare gift for improvising in the style of the classical composers, a word smith and compelling teller of tales, a drinker and a noted bohemian who never really seemed comfortable if he had a permanent residence and who walked everywhere in his home city, Berlin, because he was passionately suspicious of public transport. More than that, he became notable in Germany for resisting the inhumanity of the Nazi regime.

Cay von Brockdorff was a German sculptor and art historian who after 1933 became an anti-Nazi resistance activist.

Elisabeth Jäger was an Austrian-born journalist based, from 1950, in the German Democratic Republic. She was a committed anti-fascist and a survivor of the Ravensbrück concentration camp. 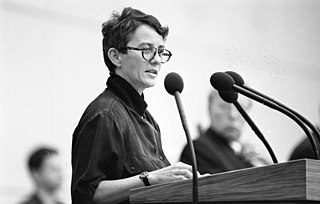 Anne Klein was a German lawyer and, at the time of German reunification, a Berlin Senator. Her politics were green. Her focus as a senator was on women's rights. She was also the first Berlin senator to "go public" about being a lesbian.

Heinrich Scheel was a German left-wing historian and longtime vice president of the East German Academy of Sciences. Scheel was notable for putting forward a theory of German radical at the time of the French revolution, in an attempt to determine an alternative tradition in Germany. Scheel was most notable for being a German resistance fighter who was a member of a Berlin based anti-fascist resistance group that was later called the Red Orchestra by the Abwehr. 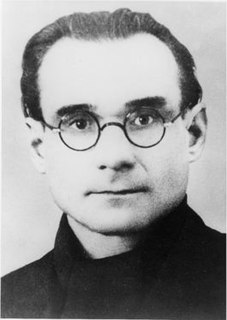 Elly Lotte Bergtel-Schleif, née Schleif, was a German librarian who was actively involved in the resistance against Nazis while a member of ithe Communist Party of Germany (KPD). Bergtel-Schleif became head of the Berlin Library School after the war.

Karl Behrens was a design engineer and resistance fighter against Nazism. Behrens was most notable for being was a member of the Berlin-based anti-fascist resistance group, that was later called the Red Orchestra by the Abwehr. Behrens acted as a courier for the group, passing reports between Arvid Harnack and Hans Coppi who was the radioman. Behrens was also active is a resistance group at the AEG turbine factory power together with Walter Homann and others. 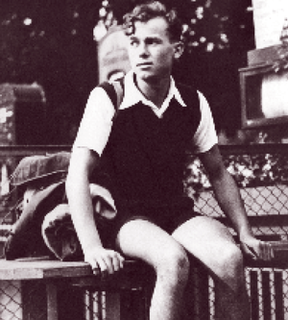 Fritz Thiel was a Polish-German precision engineeer and resistance fighter, who became part of a Berlin-based anti-fascist resistance group during World War II, that was later named the Red Orchestra by the Abwehr. Thiel along with his wife Hannelore were most notable for printing stickers using a child's toy rubber stamp kit, that they used to protest the The Soviet Paradise exhibition in May 1942 in Berlin.