Ulsan Science Museum is a science museum located in Ok-dong, Nam-gu, Ulsan, South Korea. Established in 2011, the museum has an area of 41,000 square metres (440,000 square feet) spread out over 6 floors. There is space for several exhibitions, a planetarium, and science labs and classrooms for educational courses. [1] [2] The exhibitions are almost entirely in Korean, but there are also English programs available for visiting schools. 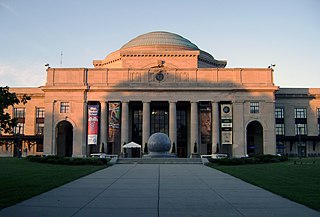 A science museum is a museum devoted primarily to science. Older science museums tended to concentrate on static displays of objects related to natural history, paleontology, geology, industry and industrial machinery, etc. Modern trends in museology have broadened the range of subject matter and introduced many interactive exhibits. Many if not most modern science museums – which increasingly refer to themselves as science centres or "discovery centres" – also emphasize technology, and are therefore also technology museums.

Ok-dong is a dong, or neighborhood, of Nam-gu in Ulsan, South Korea.

Jangsaengpo Whale Museum is a history museum located in Jangsaengpo, Nam-gu, Ulsan, South Korea. It is the only whale museum in South Korea. The museum details Ulsan's history of whaling. Whaling was banned in South Korea in 1986, but whaling artifacts were kept and are now on display in the museum which is built in what was once a central whaling area. It has a 6,946 square metres of floor space and includes a dolphinarium where visitors can watch dolphin acrobatic performances, and a 4D theatre.

Ulsan Museum is a history museum located adjacent to Ulsan Grand Park in Nam-gu, Ulsan, South Korea. The museum has a permanent exhibit that details life in Ulsan and the rest of Korea from prehistoric times to the present. Construction of the museum commenced on 2 January 2009 and was completed on 31 January 2011. It opened on 22 June 2011. 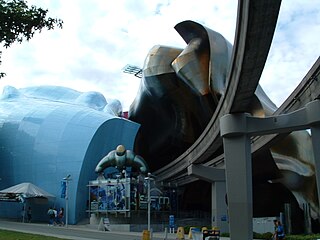 The Museum of Pop Culture, or MoPOP is a nonprofit museum dedicated to contemporary popular culture. It was founded by Microsoft co-founder Paul Allen in 2000 as the Experience Music Project. Since that time MoPOP has organized dozens of exhibits, 17 of which have toured across the US and internationally. 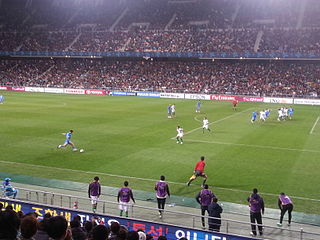 The Ulsan Munsu Stadium, nicknamed Big Crown Stadium, is a stadium in Ulsan in South Korea. It is home to the Ulsan Hyundai FC.

Starfield COEX Mall, containing COnvention centers, EXhibition halls and many malls, is an underground shopping mall in Gangnam-gu Seoul, South Korea. It has an area of about 154,000 square metres, of which 144,000 square meters are on a single underground floor, making it the world's largest underground shopping mall. The mall is located at Samseong-dong served by Samseong Station on Seoul Metro Line 2, at the intersection of Teheranno and Yeongdong Dae-ro. The COEX Mall is adjacent to the COEX Convention & Exhibition Center, which is part of the COEX complex, run by the Korea International Trade Association (KITA). 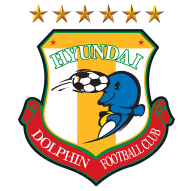 The K League All-Star Game is an annual exhibition match organised by the Korea Professional Football League. Inaugural match was held in 1991.

Bak Maeng-woo is the current mayor of Ulsan, South Korea. He is currently serving in his third, four-year term as mayor of Ulsan.

Ulsan College is a private college with two campuses in Ulsan, South Korea. The East Campus is in Dong-gu and the West Campus in Nam-gu. It was founded on 8 April 1960 as the Ulsan Industrial Technology Institute. Hyundai Heavy Industries is the college's owner and financial sponsor.

Ulsan Grand Park is the largest urban park in South Korea, with 3.69 square kilometres of park land. It is located in Ulsan Metropolitan City, and includes walking trails, a nature learning center, a botanical garden, a petting zoo, a butterfly zoo, and several playgrounds.

Ulsan Culture & Arts Center is an arts center located in Dal-dong, Nam-gu, Ulsan, South Korea. Construction of the building began in 1990 and the center opened on 5 October 1995. It was previously named the Jonghap Culture & Arts Center (Korean: 종합문화예술회관) but was renamed in 1997. It is the site of the annual Cheoyong Culture Festival, which accompanies the Ulsan World Music Festival and the Asia Pacific Music Meeting.

Wolbong Market is a traditional street market in Dong-gu, Ulsan, South Korea. The market contains many shops that sell fruit, vegetables, meat, fish, breads, clothing, and Korean traditional medicinal items. There are also many small restaurants and street-food stalls. The market is a popular shopping area for both locals and tourists.