Unlike many other codes of football, where the official is called a referee , in Australian rules football the officials are called umpires. Tom Wills, one of the founders of the Australian game, was the earliest known umpire of a football match in Australia.

At first the captains of both teams shared the duty of officiating games, however as the game became more professional in the 1880s, umpires became an important aspect of the game.

There are four different types of umpires and one type of steward in a typical game of Australian Football:

There are generally two goal umpires in each game at all levels, one at each end of the ground; occasionally, the use of two goal umpires at each end of the ground has been trialled. Goal umpires traditionally wore a white jacket, black trousers and a broad-brimmed hat, however caps and shirts have replaced the hats and jackets. The caps they wear are generally lime green or grey. They are the only umpires to wear a cap.

In the professional level Australian Football League, there are four boundary umpires in each match with two umpires sharing control of each side of the ground. At lower levels, there are typically only two or three boundary umpires.

At the professional level, and at other high levels of the game, all umpires and officials are provided by the league's umpiring department. At lower levels, it is common for the competing clubs to each provide one goal umpire and one boundary umpire to the match, but field umpires are still almost always provided by the league.

Modern umpiring and the AFL

The game of Australian rules contains some "grey areas" where application of the laws is subject to interpretation, of degree or timing, making the job of field umpires extremely difficult. The instigation of new laws by the AFL in recent years, also contributes to the amount of work needed for umpires to maintain their skills and knowledge of the game. The umpires' director for the AFL is Jeff Gieschen, responsible for setting precedents for other affiliated leagues around the world.

More recently, umpires have begun wearing uniforms of a distinctive colour to avoid a jersey clash with any of the competing teams. As of 2013, all AFL umpires wore lime green uniforms with grey shorts or trousers, which avoids a clash with any of the league's teams. Additionally, field umpires in the AFL are identifiable by a jersey number.

The most common historical pejorative term for an umpire, particularly a field umpire, was "white maggot", in reference to their historical white uniforms. [8] Where white uniforms have been abandoned, "maggot" remains a common pejorative.

The 1903 Victorian Football League season was the seventh season of the elite Australian rules football competition. 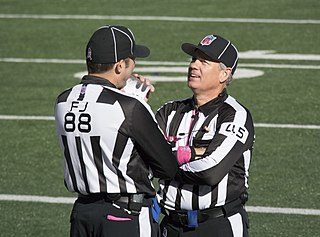 Interchange is a team position in Australian rules football, consisting of players who are part of the selected team but are not currently on the field of play.

In the Australian Football League (AFL), previously the Victorian Football League (VFL), the pre-season competition, known during its history by a variety of sponsored names and most recently as the NAB Cup, was an annual Australian rules football tournament held amongst clubs prior to the premiership season between 1988 and 2013. The pre-season competition culminated annually in a grand final and pre-season premier.

The 1912 Victorian Football League season was the 16th season of the elite Australian rules football competition.

Jeff Gieschen is the former National Umpire Manager of the Australian Football League (AFL) and a former Australian rules football player and coach who played in the Victorian Football League (VFL) between 1974 and 1978 for the Footscray Football Club. He was the senior coach of AFL club Richmond from late 1997 until the end of the 1999 season.

The 1921 Victorian Football League season was the 25th season of the elite Australian rules football competition.

The 1922 Victorian Football League season was the 26th season of the elite Australian rules football competition.

The 1928 Victorian Football League season was the 32nd season of the elite Australian rules football competition.

The 2003 Wizard Home Loans Cup was the Australian Football League competition played in its entirety before the Australian Football League's 2003 Premiership Season began. The AFL National Cup is also sometimes referred to as the pre-season cup because it is played in its entirety before the Premiership Season begins. The final was won by Adelaide for the first time in its history, defeating Collingwood by 31 points 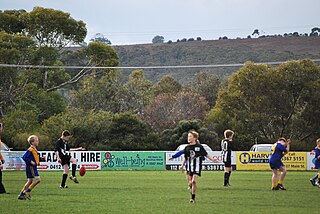 The 1996 AFL Lightning Premiership was an Australian rules football knock-out competition, played in its entirety before the Australian Football League's main pre-season competition began. The Lightning Premiership was held for the only time in the modern era in 1996 - the Centenary Season of the AFL. It was a knock-out competition played from Friday, 9 February until Sunday, 11 February, with four games each evening at Waverley Park, each consisting of two 17.5 minute halves. The game trialled a number of highly experimental rules, including three points awarded both for deliberate rushed behinds and balls which hit the goalposts, and timekeepers not blowing the siren if scores were tied. However, the rule which altered play most significantly was the ball not being thrown in from the boundary line after travelling out of bounds, a free kick being awarded instead against the last team to touch the ball. Essendon won the title defeating Brisbane by 17 points in the Grand Final. 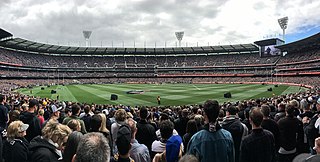 The 2018 AFL Grand Final was an Australian rules football game contested between the West Coast Eagles and the Collingwood Football Club at the Melbourne Cricket Ground on 29 September 2018. It was the 122nd annual grand final of the Australian Football League, staged to determine the premiers for the 2018 AFL season. The match, attended by 100,022 spectators, was won by West Coast by a margin of five points, marking the club's fourth premiership and first since 2006. West Coast's Luke Shuey won the Norm Smith Medal as the player judged best on ground. It is regarded as one of the greatest Grand Finals of all time; finishing 1st on the AFL's 50 greatest games of the last 50 years in 2020.