Unfit for Command: Swift Boat Veterans Speak Out Against John Kerry is a 2004 book about then U.S. Presidential candidate John Kerry by John O'Neill and Jerome Corsi published by Regnery Publishing. The book was released at the time that ads by Swift Vets and POWs for Truth were being aired on U.S. television.

The book criticizes Kerry's judgment in battle, his truthfulness, his entitlement to certain medals, and his later anti-war activities. The book was based in part on interviews with veterans who served in or with Kerry's division, and also on biographies of Kerry. [1] Several members of Kerry's crew stated that O'Neill failed to interview them. [2] Neither O'Neill nor Corsi had any firsthand knowledge of Kerry's service. O'Neill served on the Swift boats after Kerry left Vietnam and Corsi never served in Vietnam. [3] According to the Swiftboat skipper who served with Kerry, the book was "wrong." [4]

Kerry's fellow sailors released a point-by-point rebuttal of the claims and stated that "The book's authors don't give Kerry's supporters the space or the credence that they warrant." [5] According to the Seattle Times , the government documents support Kerry's war awards and claims. [6] Some veterans interviewed for the book complained that their statements were edited to strip out material favorable to Kerry. [7]

At the same time the book was being criticized, the Swift Vets and POWs for Truth group was being criticized because "None of those in the attack ad by the Swift Boat group actually served on Kerry's boat. And their statements are contrary to the accounts of Kerry and those who served under him." [8]

After controversial statements made by Corsi became public, O'Neill denied Corsi's coauthorship of the book, saying that Corsi was "simply an editor and not really any sort of co-author." [9] [10] However, portions of the book [11] contain material also found in articles posted under Corsi's name at WinterSoldier.com, a website critical of John Kerry, [12] [13] and O'Neill is cited in a later book as describing Corsi as helping to write Unfit for Command, and urging him to back out of media appearances after the controversial comments became public. [14]

In 2007 Corsi, along with several other authors, sued Regnery's parent company, Eagle Publishing, claiming the company "orchestrate[d] and participate[d] in a fraudulent, deceptively concealed and self-dealing scheme to divert book sales away from retail outlets and to wholly owned subsidiary organizations within the Eagle conglomerate." [15] The suit was dismissed on June 30, 2008. [16]

Corsi published The Obama Nation in August 2008, criticizing then U.S. presidential candidate Barack Obama. Corsi's motivations behind its publication and book itself has been compared to Unfit for Command and criticized as unsubstantiated, misleading, or inaccurate. [17] [18] [19] [20] [21] [22] [23] [24] [25] In response, the Obama campaign issued a 40-page rebuttal called Unfit for Publication, a play on the title of Corsi's 2004 book, on his website FightTheSmears.com, alleging serious factual errors. [26]

John Ellis O'Neill is a Vietnam War veteran, lawyer, and the spokesman for Swift Vets and POWs for Truth (SBVT).

Rear Admiral Roy F. "Latch" Hoffmann, U.S. Navy (retired) was Chairman of the former Swift Boat Veterans for Truth, established May 4, 2004, in opposition to John Kerry's candidacy for U.S. President, and which disbanded on May 31, 2008. As a naval officer, he patrolled the Mekong Delta on swift boats during the Vietnam War.

Stolen Honor is a 45-minute anti-John Kerry video documentary that was released during the September 2004 election season. It features interviews with a number of American men who contend they were prisoners of war in North Vietnam and suffered increased maltreatment while prisoners as a direct result of Kerry's Fulbright Hearing testimony in April 1971. The subtitle of the film is Wounds That Never Heal; on the production company's website the complete title is given instead as Stolen Honor: John Kerry's Record of Betrayal. Its name was based on the book Stolen Valor: How the Vietnam Generation Was Robbed of Its Heroes and Its History by B.G. Burkett and Glenna Whitley.

During John Kerry's candidacy in the 2004 U.S. presidential campaign, a political issue that gained widespread public attention was Kerry's Vietnam War record. In television advertisements and a book called Unfit for Command, co-authored by John O'Neill and Jerome Corsi, the Swift Boat Veterans for Truth (SBVT), a 527 group later known as the Swift Vets and POWs for Truth, questioned details of his military service record and circumstances relating to the awarding of his combat medals. Their campaign against Kerry's presidential bid received widespread publicity, but was later discredited and gave rise to the neologism "swiftboating", to describe an unfair or untrue political attack. Defenders of Kerry's service record, including former crewmates, stated that allegations made by SBVT were false.

America in Vietnam is a book by Guenter Lewy about America's role in the Vietnam War. The book is highly influential, although it has remained controversial even decades after its publication. Lewy contends that the United States' actions in Vietnam were neither illegal nor immoral, and that tales of American atrocities were greatly exaggerated in what he understands as a "veritable industry" of war crimes allegations.

Tim Bueler is a media and political consultant and is currently serving as the Director of Media Relations for the Minuteman Project, an immigration reform advocacy group.

The military career of John Kerry occurred during the Vietnam War. Kerry served as a Lieutenant in the United States Navy during the period from 1966 to 1970. His only tour in Vietnam was four months as officer in charge of a Swift boat in 1969. Kerry received several combat medals during this tour, including the Silver Star, Bronze Star, and three Purple Hearts. Kerry's military record received considerable attention during his political career, especially during his unsuccessful 2004 bid for the presidency.

Bobby Jack Perry, known as Bob J. Perry, was a Houston, Texas homebuilder, owner of Perry Homes, and major contributor to a number of politically oriented 527 groups, such as the Swift Vets and POWs for Truth and the Economic Freedom Fund. 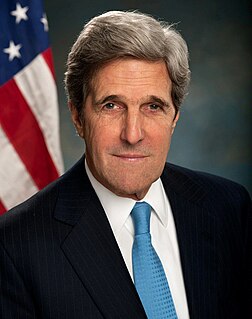 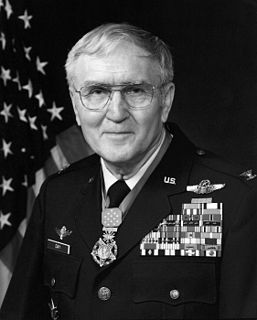 The Swift Boat challenge from Oklahoma oilman T. Boone Pickens was his reported offer of $1 million to anyone who can disprove even a single charge made by the Swift Vets and POWs for Truth, formerly the Swift Boat Veterans for Truth, during the Presidential election campaign.

The Senate Select Committee on POW/MIA Affairs was a special committee convened by the United States Senate during the George H. W. Bush administration to investigate the Vietnam War POW/MIA issue, that is, the fate of United States service personnel listed as missing in action during the Vietnam War. The committee was in existence from August 2, 1991 to January 2, 1993. 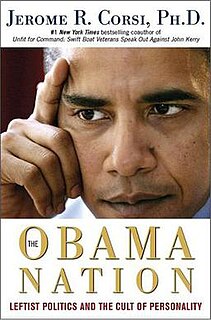 The Obama Nation: Leftist Politics and the Cult of Personality is a bestselling book by Jerome Corsi intended by its author to oppose Barack Obama's candidacy for President of the United States. The book alleges Obama's "extreme leftism", "extensive connections with Islam and radical politics", "naïve... foreign policy", past drug use and connections to corrupt backers, among other things. The book has been criticized for containing factual errors, for being racially charged, and for being a political "attack book" containing smears, falsehoods, and innuendo. 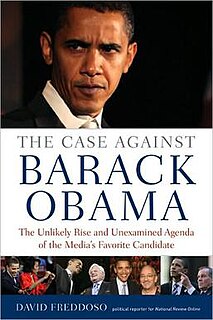 The Case Against Barack Obama: The Unlikely Rise and Unexamined Agenda of the Media's Favorite Candidate, by author David Freddoso, is a bestselling book published in late 2008, providing a critical examination of the life and opinions of the then United States presidential candidate and Senator Barack Obama. 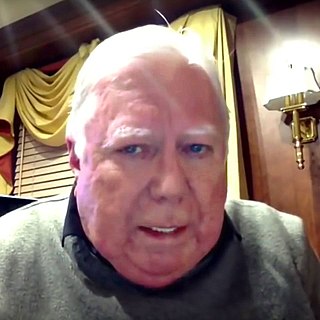 Jerome Robert Corsi is an American author, political commentator, and conspiracy theorist. His two New York Times best-selling books, Unfit for Command (2004) and The Obama Nation (2008), attacked Democratic presidential candidates and have been criticized for including numerous inaccuracies.

Where's the Birth Certificate?: The Case That Barack Obama Is Not Eligible to Be President is a book by Jerome Corsi which promotes the claim that then U.S. president Barack Obama was not a natural-born citizen of the United States and was thus constitutionally unqualified to hold the office. The book was released on May 17, 2011, and reached No. 6 on the New York Times list of best-selling hardcover non-fiction books. It has been publicized in politically conservative venues.