Unified theory of acceptance and use of technology

The unified theory of acceptance and use of technology (UTAUT) is a technology acceptance model formulated by Venkatesh and others in "User acceptance of information technology: Toward a unified view". [1] The UTAUT aims to explain user intentions to use an information system and subsequent usage behavior. The theory holds that there are four key constructs: 1) performance expectancy, 2) effort expectancy, 3) social influence, and 4) facilitating conditions.

The first three are direct determinants of usage intention and behavior, and the fourth is a direct determinant of user behavior. Gender, age, experience, and voluntariness of use are posited to moderate the impact of the four key constructs on usage intention and behavior. The theory was developed through a review and consolidation of the constructs of eight models that earlier research had employed to explain information systems usage behaviour (theory of reasoned action, technology acceptance model, motivational model, theory of planned behavior, a combined theory of planned behavior/technology acceptance model, model of personal computer use, diffusion of innovations theory, and social cognitive theory). Subsequent validation by Venkatesh et al. (2003) of UTAUT in a longitudinal study found it to account for 70% of the variance in Behavioural Intention to Use (BI) and about 50% in actual use. [1]

Extension of the theory

Persuasive technology is broadly defined as technology that is designed to change attitudes or behaviors of the users through persuasion and social influence, but not necessarily through coercion. Such technologies are regularly used in sales, diplomacy, politics, religion, military training, public health, and management, and may potentially be used in any area of human-human or human-computer interaction. Most self-identified persuasive technology research focuses on interactive, computational technologies, including desktop computers, Internet services, video games, and mobile devices, but this incorporates and builds on the results, theories, and methods of experimental psychology, rhetoric, and human-computer interaction. The design of persuasive technologies can be seen as a particular case of design with intent.

The technology acceptance model (TAM) is an information systems theory that models how users come to accept and use a technology.

Uses and gratifications theory (UGT) is an approach to understanding why and how people actively seek out specific media to satisfy specific needs. UGT is an audience-centered approach to understanding mass communication. Diverging from other media effect theories that question "what does media do to people?", UGT focuses on "what do people do with media?" It postulates that media is a highly available product and the audiences are the consumers of the same product. 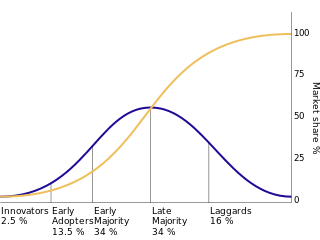 Diffusion of innovations is a theory that seeks to explain how, why, and at what rate new ideas and technology spread. Everett Rogers, a professor of communication studies, popularized the theory in his book Diffusion of Innovations; the book was first published in 1962, and is now in its fifth edition (2003). Rogers argues that diffusion is the process by which an innovation is communicated over time among the participants in a social system. The origins of the diffusion of innovations theory are varied and span multiple disciplines.

The theory of planned behavior (TPB) is a psychological theory that links beliefs to behavior. The theory maintains that three core components, namely, attitude, subjective norms, and perceived behavioral control, together shape an individual's behavioral intentions. In turn, a tenet of TPB is that behavioral intention is the most proximal determinant of human social behavior.

In media studies, mass communication, media psychology, communication theory, and sociology, media influence and media effects are topics relating to mass media and media culture's effects on individual or an audience's thoughts, attitudes, and behavior. Whether it is written, televised, or spoken, mass media reaches a large audience. Mass media's role and effect in shaping modern culture are central issues for study of culture.

The elaboration likelihood model (ELM) of persuasion is a dual process theory describing the change of attitudes. The ELM was developed by Richard E. Petty and John Cacioppo in 1980. The model aims to explain different ways of processing stimuli, why they are used, and their outcomes on attitude change. The ELM proposes two major routes to persuasion: the central route and the peripheral route.

Self-efficacy is, according to psychologist Albert Bandura who originally proposed the concept, a personal judgment of how well or poorly a person is able to cope with a given situation based on the skills they have and the circumstances they face.

The theory of reasoned action aims to explain the relationship between attitudes and behaviors within human action. It is mainly used to predict how individuals will behave based on their pre-existing attitudes and behavioral intentions. An individual's decision to engage in a particular behavior is based on the outcomes the individual expects will come as a result of performing the behavior. Developed by Martin Fishbein and Icek Ajzen in 1967, the theory derived from previous research in social psychology, persuasion models, and attitude theories. Fishbein's theories suggested a relationship between attitude and behaviors. However, critics estimated that attitude theories were not proving to be good indicators of human behavior. The TRA was later revised and expanded by the two theorists in the following decades to overcome any discrepancies in the A-B relationship with the theory of planned behavior (TPB) and reasoned action approach (RAA). The theory is also used in communication discourse as a theory of understanding.

Behavioural change theories are attempts to explain why human behaviours change. These theories cite environmental, personal, and behavioural characteristics as the major factors in behavioural determination. In recent years, there has been increased interest in the application of these theories in the areas of health, education, criminology, energy and international development with the hope that understanding behavioural change will improve the services offered in these areas. Some scholars have recently introduced a distinction between models of behavior and theories of change. Whereas models of behavior are more diagnostic and geared towards understanding the psychological factors that explain or predict a specific behavior, theories of change are more process-oriented and generally aimed at changing a given behavior. Thus, from this perspective, understanding and changing behavior are two separate but complementary lines of scientific investigation. 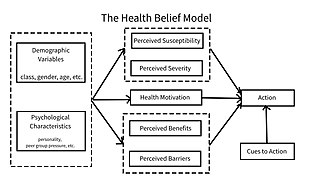 The health belief model (HBM)) is a social psychological health behavior change model developed to explain and predict health-related behaviors, particularly in regard to the uptake of health services. The HBM was developed in the 1950s by social psychologists at the U.S. Public Health Service and remains one of the best known and most widely used theories in health behavior research. The HBM suggests that people's beliefs about health problems, perceived benefits of action and barriers to action, and self-efficacy explain engagement in health-promoting behavior. A stimulus, or cue to action, must also be present in order to trigger the health-promoting behavior.

Active users is a measurement metric that is commonly used to measure the level of engagement for a particular product or object, by quantifying the number of active interactions from visitors within a relevant range of time . The metric has many uses in both commerce and academia, such as on social networking services, online games, or mobile apps. Although having extensive uses in digital behavioural learning, prediction and reporting, it also has impacts on the privacy and security, and ethical factors should be considered thoroughly. Like any metric, active users may have limitations and criticisms. Active Users is relatively new or neologistic in nature, that became important with the rise of the commercialised internet, with uses in communication and social-networking. It measures how many users visit or interact with the product or service over a given interval or period. This metric is commonly assessed per month as monthly active users (MAU), per week as weekly active users (WAU), per day as daily active users (DAU) or peak concurrent users (PCU).

Technological self-efficacy (TSE) is "the belief in one's ability to successfully perform a technologically sophisticated new task". TSE does not highlight specific technological tasks; instead it is purposely vague. This is a specific application of the broader and more general construct of self-efficacy, which is defined as the belief in one's ability to engage in specific actions that result in desired outcomes. Self efficacy does not focus on the skills one has, but rather the judgments of what one can do with his or her skills. Traditionally, a distinguishing feature of self efficacy is its domain-specificity. In other words, judgments are limited to certain types of performances as compared to an overall evaluation of his or her potential. Typically, these constructs refer to specific types of technology; for example, computer self-efficacy, or internet self-efficacy and information technology self-efficacy. In order to organize this literature, technology specific self-efficacies that technology specific self-efficacies can be considered sub-dimensions under the larger construct of technological self-efficacy.