The union was formed on 1 January 2008, when the Swedish Union of Commercial Salaried Employees merged with the Swedish Union of Clerical and Technical Employees in Industry. [2] Like both its predecessors, it affiliated to the Swedish Confederation of Professional Employees. Unionen is the biggest trade union in Sweden and the biggest white-collar union in the world. [3] In 2014, it was joined by the Pharmacy Union, and in 2019 by the Association of Forestal and Agricultural Employees. The union had 403,623 members on formation, and grew to 566,331 members by 2019. [4]

A trade union, often simply called a union, is an organization of workers who have come together to achieve many common goals, such as protecting the integrity of their trade, improving safety standards, and attaining better wages, benefits, and working conditions through the increased bargaining power wielded by the creation of a monopoly of the workers. Trade unions typically fund the formal organization, head office, and legal team functions of the trade union through regular fees or union dues. The delegate staff of the trade union representation in the workforce are made up of workplace volunteers who are appointed by members in democratic elections.

Gustaf V was King of Sweden from 1907 until his death in 1950. He was the eldest son of King Oscar II of Sweden and Sophia of Nassau, a half-sister of Adolphe, Grand Duke of Luxembourg. Reigning from the death of his father, Oscar II, in 1907 to his own death 43 years later, he holds the record of being the oldest monarch of Sweden and the third-longest rule, after Magnus IV and Carl XVI Gustaf. He was also the last Swedish monarch to exercise his royal prerogatives, which largely died with him, although they were formally abolished only with the remaking of the Swedish constitution in 1974. He was the first Swedish king since the High Middle Ages not to have a coronation and so never wore the king's crown, a practice that has continued ever since.

The Norwegian Confederation of Trade Unions is a national trade union center, decidedly the largest and probably the most influential umbrella organization of labour unions in Norway. The 21 national unions affiliated to the LO have almost 900,000 members of a Norwegian population of 5 million. The majority of affiliated unions organizes traditional blue collar workers, but the largest affiliate is the Norwegian Union of Municipal and General Employees which makes up more than a third of all members. LO is affiliated to the ITUC and the ETUC. Gerd Kristiansen was elected leader on 6 May 2013 for a four-year period.

The Confederation of Professional Employees is a national trade union centre, the umbrella organisation for 13 trade unions in Sweden that organise professional and other qualified employees in both the private and the public sectors. The affiliated trade unions represent about 1.1 million employees. In 2018, the TCO affiliated unions made up 37% of all active trade union members in Sweden, making the confederation the second largest of Sweden's three major confederations. The largest TCO affiliate is Unionen with 551,000 active members in 2018. TCO is independent and not affiliated to any political party in Sweden. TCO is an affiliate of the European Trade Union Confederation and Eurocadres.

The Swedish Union of Clerical and Technical Employees in Industry was the largest trade union for white-collar workers in Sweden.

The Swedish Trade Union Confederation, commonly referred to as LO, is a national trade union centre, an umbrella organisation for fourteen Swedish trade unions that organise mainly "blue-collar" workers. The Confederation, which gathers in total about 1.5 million employees out of Sweden's 10 million people population, was founded in 1898 by blue-collar unions on the initiative of the 1897 Scandinavian Labour Congress and the Swedish Social Democratic Party, which almost exclusively was made up by trade unions. In 2019 union density of Swedish blue-collar workers was 60%, a decline by seventeen percentage points since 2006. A strongly contributing factor was the considerably raised fees to union unemployment funds in January 2007 made by the new centre-right government.

The Union of Salaried Employees was a trade union in Finland. With 125,000 members, TU was a major trade union for workers in industry and industrial services, technics, economy and information. 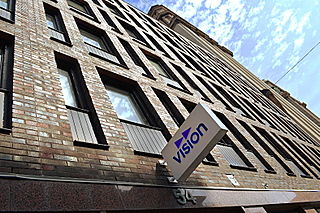 The Swedish Union of Commercial Salaried Employees was a trade union in Sweden. It had a membership of 160,000 and represented workers in a variety of industries, ranging from wholesaling, transport, freight forwarding, civil aviation and travel agencies to retailing, media companies and private dental practice.

The Swedish Union of Civil Servants (ST) is a trade union in Sweden. With a membership of 97,000 it is the largest union of civil servants in the country. 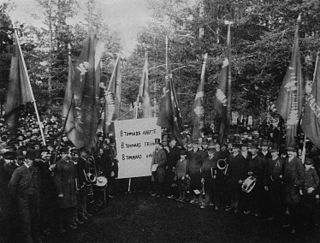 The labour movement in Sweden dates back to at least the 1850s, when Swedish workers initiated the organizing of previously spontaneous food riots into strikes, hence acting as an autonomous group. 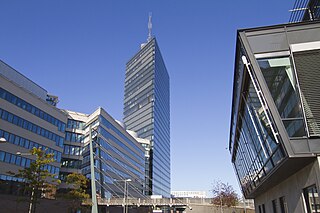 The economy of Sweden is a developed export-oriented economy aided by timber, hydropower, and iron ore. These constitute the resource base of an economy oriented toward foreign trade. The main industries include motor vehicles, telecommunications, pharmaceuticals, industrial machines, precision equipment, chemical goods, home goods and appliances, forestry, iron, and steel. Traditionally a modern agricultural economy that employed over half the domestic workforce, today Sweden further develops engineering, mine, steel, and pulp industries that are competitive internationally, as evidenced by companies like Ericsson, ASEA/ABB, SKF, Alfa Laval, AGA, and Dyno Nobel. 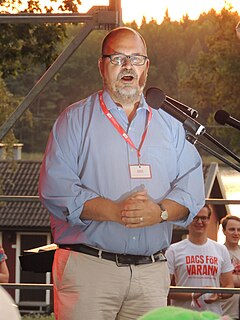 Karl-Petter "Kålle" Thorwaldsson is a Swedish union leader. He is the president of the Swedish Trade Union Confederation. He resigned in June 2020.

Saab Automobile was sold to Spyker Cars N.V. in 2010 after a deal between Spyker and then-current owner General Motors. After struggling to avoid insolvency throughout 2011, the company petitioned for bankruptcy following the failure of a Chinese consortium to complete a purchase of the company; the purchase had been blocked by former owner GM, which opposed the transfer of technology and production rights to a Chinese company. In 2012, Spyker filed a lawsuit against GM asking for US$3 billion in damages after GM had attempted to block the deals between Spyker and Chinese automaker Youngman, who were investing in Saab Automobile. Consequently, Saab was forced to file bankruptcy in 2012. Spyker's claim was dismissed in June 2013. 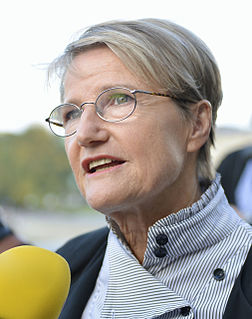 Inger Kristina Persson, is a Swedish politician of the Social Democrats. She served as Minister for Nordic Cooperation and Minister for Strategic Development, under Prime Minister Stefan Löfven, from October 2014 to May 2016.

The Swedish Union for Performing Arts and Film, is a Swedish trade union and professional association for professional practitioners of authors, artists, technicians, administrators and students in theater and film. The union was formed in 1894 and was originally called the Swedish Theatre Union. Since 2018, the chairman is Simon Norrthon.

Per Erik Boivie is a Swedish trade union innovator and entrepreneur who founded TCO Certified, a global user- and sustainability certification of IT equipment.

The TCO Certified certification was initially created by the Swedish Confederation of Professional Employees (TCO) to guarantee that computer products purchased by employers maintain ecological standards and were sufficiently ergonomic to prevent long term health issues for users. It rose to fame during the 1990s as a certification for computer displays. Dating back to 1992, TCO is one of the oldest certifications for end user electronics.