Uniplus+ is a discontinued commercial version of the Unix System III and System V operating systems. It was available in the 1980s. It ran on the MC68000 Motorola chipset on Torch Triple X, among other machines. [1] It was released by UniSoft. [2] [3]

troff is the major component of a document processing system developed by AT&T Corporation for the Unix operating system. 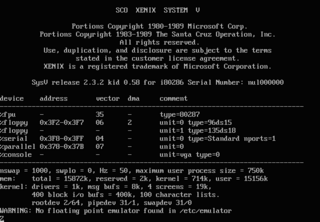 XENIX is a discontinued version of the UNIX operating system for various microcomputer platforms, licensed by Microsoft from AT&T Corporation in the late 1970s. The Santa Cruz Operation (SCO) later acquired exclusive rights to the software, and eventually replaced it with SCO UNIX.

TYPSET was a document editor that was used with the 1964-released RUNOFF program, one of the earliest text formatting programs to see significant use. 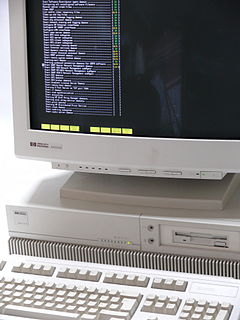 UniSoft Corporation is an American software developer established in 1981, originally focused on the development of Unix ports for various computer architectures. Based in Millbrae, California, it now builds standardization and conformance testing applications for the digital television market.

In computing, exit is a command used in many operating system command-line shells and scripting languages.

In computing, more is a command to view the contents of a text file one screen at a time. It is available on Unix and Unix-like systems, DOS, Digital Research FlexOS, IBM/Toshiba 4690 OS, IBM OS/2, Microsoft Windows and ReactOS. Programs of this sort are called pagers. more is a very basic pager, originally allowing only forward navigation through a file, though newer implementations do allow for limited backward movement. 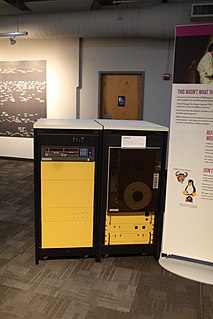 The Model 7/32 and Model 8/32 were 32-bit minicomputers introduced by Perkin-Elmer after they acquired Interdata, Inc., in 1973. Interdata computers are primarily remembered for being the first 32-bit minicomputers. The 8/32 was a more powerful machine than the 7/32, with the notable feature of allowing user-programmable microcode to be employed.

Interactive Systems Corporation was a US-based software company and the first vendor of the Unix operating system outside AT&T, operating from Santa Monica, California. It was founded in 1977 by Peter G. Weiner, a RAND Corporation researcher who had previously founded the Yale University computer science department and had been the Ph. D. advisor to Brian Kernighan, one of Unix's developers at AT&T. Weiner was joined by Heinz Lycklama, also a veteran of AT&T and previously the author of a Version 6 Unix port to the LSI-11 computer.

as is a generic command name for an assembler on Unix. 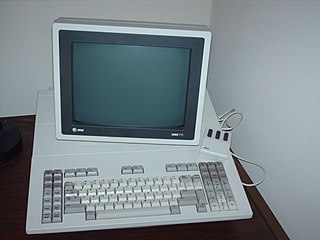 The AT&T UNIX PC is a Unix desktop computer originally developed by Convergent Technologies, and marketed by AT&T in the mid- to late-1980s. The system was also known as PC-7300, and often dubbed the 3B1. Despite the latter name, the system had little in common with AT&T's line of 3B series computers. The system was tailored for use as a productivity tool in office environments and as an electronic communication center.

The Torch Triple X was a UNIX workstation computer produced by the British company Torch Computers, and launched in 1985. It was based on the Motorola 68010 microprocessor and ran a version of UNIX System V.

In computing, the print command provides single-user print spooling capability in a number of operating systems. It is roughly similar to that provided by the UNIX System V lp and BSD lpr print spooler systems.

In computing, copy is a command in various operating systems. The command copies computer files from one directory to another.