Findings of the report

The index found that the rate of homicides per 100,000 people in the UK had fallen from 1.99 in 2003, to one in 2012. Further, it found that the violent crime rate was down by about one quarter (from 1,255 per 100,000 people in 2003, to 933 in 2012), [1] with the southeast of the country as the most peaceful place to live (Broadland in Norfolk received the highest rank). In Scotland, Glasgow was rated least peaceful and the Orkney Islands as most peaceful. In Northern Ireland, Belfast was worst and Castlereagh was best. [2] The report finds Wales as "easily" the most peaceful of the nations of the UK. [3] In terms of other categories of crimes, public disorder offenses fell by 29%, while weapons crimes fell by 34%. [4] The index found that 25 per cent of British citizens expect to become a victim of crime, while only 4 per cent actually experience it. [5] Despite the high rate of perceptions of crime, the country experienced the largest drop in violence rates of any European country over the last decade. [6] The report notes that "there is no commonly accepted explanation by criminologists for the fall in violence in many of the world's regions including the US, Western Europe, Eastern and Central Europe, as well as the UK," and that "many of the more common theories" are not backed by statistical evidence. For example, while the global financial crisis has seen many countries suffer severely in economic terms and while levels of peacefulness increased, the idea that violent crime goes up when the economy goes down is not backed by the evidence. [7]

The UKPI reinforces findings from the United States Peace Index: access to employment, health, and education provides protection from the poverty and has significant impact on reducing violence and improving economic activity. [8] The study found that violence costs the U.K. 124 billion pounds ($189 billion) a year, more than 7 percent of gross domestic product. [9] The authors of the index have stated that a 9% reduction in violence in the UK would be equivalent to the total cost of the London Olympics. [10]

Peace is a concept of societal friendship and harmony in the absence of hostility and violence. In a social sense, peace is commonly used to mean a lack of conflict and freedom from fear of violence between individuals or groups. Throughout history leaders have used peacemaking and diplomacy to establish a certain type of behavioral restraint that has resulted in the establishment of regional peace or economic growth through various forms of agreements or peace treaties. Such behavioral restraint has often resulted in the reduction of conflicts, greater economic interactivity, and consequently substantial prosperity.

Violence is the use of physical force so as to injure, abuse, damage, or destroy. Other definitions are also used, such as the World Health Organization's definition of violence as "the intentional use of physical force or power, threatened or actual, against oneself, another person, or against a group or community, which either results in or has a high likelihood of resulting in injury, death, psychological harm, maldevelopment, or deprivation."

A violent crime, violent felony, crime of violence or crime of a violent nature is a crime in which an offender or perpetrator uses or threatens to use force upon a victim. This entails both crimes in which the violent act is the objective, such as murder or rape, as well as crimes in which violence is used as a form coercion. Violent crimes may, or may not, be committed with weapons. Depending on the jurisdiction, violent crimes may vary from homicide to harassment. Violent criminals include hostile acts towards other such as murders, active shooters, kidnappers, rapists, burglars, muggers and torturers. Another category of violent criminals are hijackers of cars or aircraft. Gangsters and drug cartels also include violent criminals in their group. Violent Criminals also include behaviors such as anger, lack of self-control, psychological/mental health issues and aggressive tendencies which causes them to carry out these violent acts.

Overall, there is a low rate of crime in Canada. Under the Canadian constitution, the power to establish criminal law and rules of investigation is vested in the federal Parliament. The provinces share responsibility for law enforcement, and while the power to prosecute criminal offences is assigned to the federal government, responsibility for prosecutions is delegated to the provinces for most types of criminal offences. Laws and sentencing guidelines are uniform throughout the country, but provinces vary in their level of enforcement.

The Corruption Perceptions Index (CPI) is an index published annually by Berlin-based Transparency International since 1995 which ranks countries "by their perceived levels of public sector corruption, as determined by expert assessments and opinion surveys." The CPI generally defines corruption as an "abuse of entrusted power for private gain".

Crime in the United States has been recorded since the early 1600’s. Crime rates have varied over time, with a sharp rise after 1900, reaching a broad bulging peak between the 1970s and early 1990s. Since then, crime has declined significantly and remains moderate at best nationwide, with crime rates continuing to decline through the first two decades of the new millenium. Since 1994 crime rates have steadily decreased, before rising up after 2015 until 2018. From 2018 to 2019, crime rates have recontinued at a steady decline onwards from that point in time. 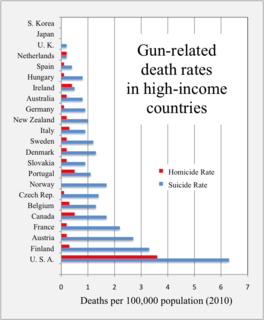 Global Peace Index (GPI) is a report produced by the Institute for Economics & Peace (IEP) which measures the relative position of nations' and regions' peacefulness. The GPI ranks 172 independent states and territories according to their levels of peacefulness. In the past decade, the GPI has presented trends of increased global violence and less peacefulness.

Crime rates in Portugal are generally low, and most crimes are non-violent. 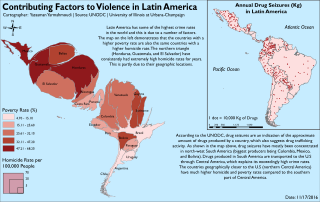 Crime and violence affect the lives of millions of people in Latin America. Some consider social inequality to be a major contributing factor to levels of violence in Latin America, where the state fails to prevent crime and organized crime takes over State control in areas where the State is unable to assist the society such as in impoverished communities. In the years following the transitions from authoritarianism to democracy, crime and violence have become major problems in Latin America. The region experienced more than 2.5 million murders between 2000 and 2017. Several studies indicated the existence of an epidemic in the region; the Pan American Health Organization called violence in Latin America "the social pandemic of the 20th century." Apart from the direct human cost, the rise in crime and violence has imposed significant social costs and has made much more difficult the processes of economic and social development, democratic consolidation and regional integration in the Americas.

Crime in Singapore is extremely low compared to other developed nations and the world in general. According to the Economist Intelligence Unit 2019 Safe Cities Index, Singapore was ranked as the safest city in the world, especially in regards to digital, personal and infrastructure security. The country also ranks highly on the Global Peace Index, being consistently placed in the top 10 and the highest in Asia for the past decade.

The Institute for Economics and Peace (IEP), chaired by technology entrepreneur Steve Killelea founder of IR, is a global think tank headquartered in Sydney, Australia with branches in New York City, Mexico City and Oxford. IEP develops conceptual frameworks to define peacefulness, providing metrics for measurement, uncovering the relationship between peace, business, and prosperity, and seeking to promote understanding of the cultural, economic, and political factors that drive peacefulness. IEP works in partnership with the Aspen Institute, Economists for Peace and Security the United Nations Global Compact, Center for Strategic and International Studies and Cranfield University. It also collaborates with the Organisation for Economic Co-operation and Development, the Commonwealth Secretariat, UNDP and UN Peacebuilding Support Office.

The statistical correlations of criminal behavior explore the associations of specific non-criminal factors with specific crimes. 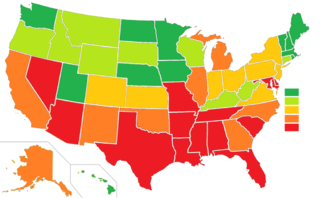 The United States Peace Index (USPI) is a measurement of American States and cities by their peacefulness. Created by the Institute for Economics and Peace, the creators of the Global Peace Index, it is said to be the first in a series of National sub-divisions by their peacefulness. The USPI was created first due to plentiful data and a large amount of diversity between states for level of peace. The United States ranked 88/158 on the Global Peace index for 2012. The U.S. index was released on 6 April 2011 and the second edition was released on 24 April 2012.

The Mexico Peace Index (MPI) is one in a series of National Peace Indices produced by the Institute for Economics and Peace (IEP). The MPI provides a comprehensive measure of peacefulness in Mexico, the fifth edition of the MPI was released in 2017. The report is released in both Spanish and English, and analyzes the economic benefits that would occur from increases in peace, and provides an estimate relating to the economic impact violence has had on Mexico.

The crime drop or crime decline is a pattern observed in many countries whereby rates of many types of crime declined by 50% or more beginning in the mid to late 1980s and early 1990s. 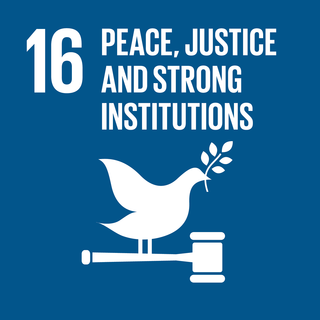