PAL and UPP leader Gabriel Baccus Matthews was the main opposition politician in Liberia under Doe, and after Doe's death in 1990 he became Foreign Minister until 1993.

In the elections held on 19 July 1997, the UPP presidential candidate Gabriel Baccus Matthews won 2.51% of the vote. The party won 2 out of 64 seats in the House of Representatives and none in the Senate. While international observers deemed the polls administratively free and transparent, they noted that it had taken place in an atmosphere of intimidation because most voters believed that former rebel leader and National Patriotic Party (NPP) candidate Charles Taylor would return to war if defeated. Matthews retired as leader of the party in 1999.

Former senior PPP and UPP member Sekou Conneh became leader of the Liberians United for Reconciliation and Democracy (LURD) rebel group in 1999, which also included some former Doe supporters, and fought a civil war against Taylor until 2003. Conneh then ran as the 2005 presidential candidate of the Progressive Democratic Party (PRODEM).

In the 11 October 2005 elections, the United People's Party and the Liberian People's Party participated as part of the Alliance for Peace and Democracy (APD).

Both parties campaigned as part of the National Democratic Coalition in the 2011 presidential and legislative elections.

Prince Yormie Johnson is a Liberian politician and the current Senior Senator from Nimba County. A former rebel leader, Johnson played a prominent role in the First Liberian Civil War in which he captured, tortured, mutilated and executed President Samuel Doe, who had himself overthrown and murdered the previous president William R. Tolbert Jr.

William Richard Tolbert Jr. was the 20th President of Liberia from 1971 until 1980, when he was killed in a coup d'état led by Samuel Doe.

The Liberian Action Party was a political party in Liberia.

The Liberian People's Party (LPP) is a political party in Liberia. 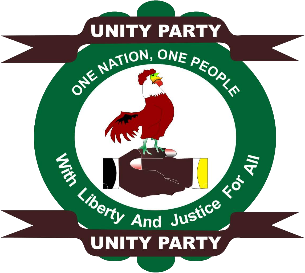 The Unity Party (UP) is a political party in Liberia that was started in 1984 by Edward B. Kesselly, also its first standard bearer. Officially founded at Buchanan in Grand Bassa County, the party was established on 27 July 1985. The Unity Party participated in the first elections after the 1980 coup, running against President Samuel Doe in October 1985. The party has remained active in Liberian politics since and was, until 2017, the ruling party.

The 1997 Liberian general election was held on 19 July 1997 as part of the 1996 peace agreement ending the First Liberian Civil War. The presidency, as well as all seats in the House of Representatives and the Senate were up for election. Voter turnout was around 89%. Former rebel leader Charles Taylor and his National Patriotic Party (NPP) won the election with 75.3% of the vote, giving it about three-quarters of the legislative seats according to the proportional representation system. Taylor was inaugurated as president on 2 August 1997.

The Progressive Democratic Party (PRODEM) is a political party in Liberia, formed in 2005. It fielded candidates in the 11 October 2005 elections.

Togba-Nah Tipoteh is an economist, educator and politician, having been a presidential candidate in three elections. For more than three decades, he has been actively involved with democratic activities in promotion of human rights, liberties, constitutional rule and growth with development in Liberia and throughout Africa. He is President of the Movement for Justice in Africa (MOJA); was founding Chairman of the Collaborating Political Parties (CPP), an alliance of Liberian political parties; was founder and Director-General of Susukuu Incorporated, Liberia's oldest non-governmental development organization, which was credited by the West Africa Peacekeeping Force (ECOMOG) as helping to disarm over 10,000 combatants and child soldiers in Liberia during the 1997 disarmament program through a school for gun program; and was former Chairman of the Interest Groups of Liberia, a consortium of 32 national organizations with a collective membership of well over one million persons.

Chea Job Cheapoo, Sr. was a Liberian politician who served as the 15th Chief Justice of Liberia from July 1987 until his impeachment and removal from office on December 2 of that year. His full rights were later restored by an act of legislature.

The Alliance for Peace and Democracy (APD) was a coalition of two Liberian political parties, the Liberian People's Party (LPP) and the United People's Party (UPP), that contested the 11 October 2005 elections.

The Progressive People's Party (PPP) is a political party in Liberia.

Mohamed Yahya Sillah is a Sierra Leonean politician, journalist and human rights activist. He was active in the transition efforts from military to civilian rule in Sierra Leone. As the National Chairman of the National Alliance Democratic Party (NADP), he was an unsuccessful candidate in the 1996 Presidential elections.

The Progressive Alliance of Liberia (PAL) was a political party in Liberia formed in 1975 as the first legally recognized opposition party in the 20th century, a period otherwise dominated by the True Whig Party. The party was initially formed among the Liberian diaspora in the United States; it was led in Liberia by Gabriel Baccus Matthews, an activist who espoused a quasi-Marxist ideology of militant African nationalism and African socialism.

General elections were held in Liberia on 10 October 2017 to elect the President and House of Representatives. No candidate won a majority in the first round of the presidential vote, so the top two finishers — CDC standard-bearer Amb. George Weah and UP standard-bearer Vice President Joseph Boakai — competed in a run-off on 26 December. The second round was originally scheduled for 7 November, but was postponed after LP standard-bearer Cllr. Charles Brumskine, in third place, challenged the result in the Supreme Court. The Supreme Court dismissed the challenge, which would have forced a re-run of the first round had it been successful, and the second round was held on 26 December. Weah emerged victorious with 60% of the vote.