The United States Employment Service (USES) is an agency of the federal government of the United States responsible for "assisting coordination of the State public employment services in providing labor exchange and job finding assistance to job seekers and employers".[ This quote needs a citation ]

In around 1890, both the United States and European governments created government-funded employment offices to provide work for unemployed unskilled laborers. These services proved to be unsuccessful.[ according to whom? ] In 1933 during the Great Depression, with the Wagner-Peyser Act, the USES was reinstated “to set minimum standards, develop uniform administrative and statistical procedures, publish employment information, and promote a system of "clearing labor" between states.” [1] Then President Franklin D. Roosevelt had created many government-funded work projects to help boost the economy and the USES was responsible for hiring the workers on those projects. The USES operated originally in only a few states but by World War II, it was operating in all states and played a major role[ according to whom? ] in providing jobs during the war. In the United States home front during World War II, the service coordinated employment of prisoners of war (e.g., using German POWs at Gettysburg for local pulpwood cutting). [2]

Like many labor organizations of its time, the USES stated a belief in racial equality in the workplace, yet it provided fewer jobs for its African American workers. Historian Eric Arnesen from the University of Illinois argues that, “although the agency stated its general opposition to racial discrimination, it referred very few African Americans to jobs in war industries, defense training courses, or youth work-defense projects. In fact, the central administration encouraged its branches, especially in the South, to oblige employer preferences by accommodating racial discrimination.” [3] In the Bureau of Agricultural Economics instructional manual for the USES during wartime from the 1940s, it reads that the USES policy was, “to make all referrals without regard to race, color, creed, or national origin except when an employer’s order includes these specifications which the employer is not willing to eliminate,” and if the employer had no racial preferences “but community custom or past hiring practices of the employer indicate that he may refuse to hire individuals of a particular race, color, creed, or national origin, the employment office interviewer shall ascertain whether or not he has any restrictive specifications.” [4] 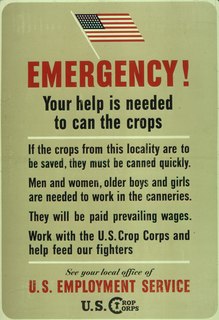 Affirmative action refers to a set of policies and practices within a government or organization seeking to increase the representation of particular groups based on their gender, race, sexuality, creed or nationality in areas in which they are underrepresented such as education and employment. Historically and internationally, support for affirmative action has sought to achieve goals such as bridging inequalities in employment and pay, increasing access to education, promoting diversity, and redressing apparent past wrongs, harms, or hindrances.

Racial discrimination is any discrimination against any individual on the basis of their skin color, or racial or ethnic origin. Individuals can discriminate by refusing to do business with, socialize with, or share resources with people of a certain group. Governments can discriminate in a de facto fashion or explicitly in law, for example through policies of racial segregation, disparate enforcement of laws, or disproportionate allocation of resources. Some jurisdictions have anti-discrimination laws which prohibit the government or individuals from discriminating based on race in various circumstances. Some institutions and laws use affirmative action to attempt to overcome or compensate for the effects of racial discrimination. In some cases, this is simply enhanced recruitment of members of underrepresented groups; in other cases, there are firm racial quotas. Opponents of strong remedies like quotas characterize them as reverse discrimination, where members of a dominant or majority group are discriminated against.

Employment is a relationship between two parties, usually based on contract where work is paid for, where one party, which may be a corporation, for profit, not-for-profit organization, co-operative or other entity is the employer and the other is the employee. Employees work in return for payment, which may be in the form of an hourly wage, by piecework or an annual salary, depending on the type of work an employee does or which sector they are working in. Employees in some fields or sectors may receive gratuities, bonus payment or stock options. In some types of employment, employees may receive benefits in addition to payment. Benefits can include health insurance, housing, disability insurance or use of a gym. Employment is typically governed by employment laws, organisation or legal contracts.

In United States labor law, at-will employment is an employer's ability to dismiss an employee for any reason, and without warning, as long as the reason is not illegal. When an employee is acknowledged as being hired "at will," courts deny the employee any claim for loss resulting from the dismissal. The rule is justified by its proponents on the basis that an employee may be similarly entitled to leave his or her job without reason or warning. The practice is seen as unjust by those who view the employment relationship as characterized by inequality of bargaining power. 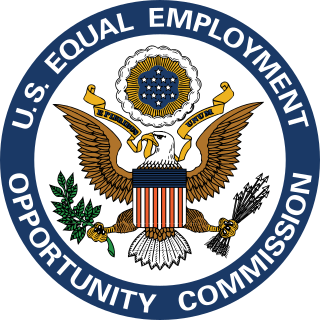 The U.S. Equal Employment Opportunity Commission (EEOC) is a federal agency that was established via the Civil Rights Act of 1964 to administer and enforce civil rights laws against workplace discrimination. The EEOC investigates discrimination complaints based on an individual's race, color, national origin, religion, sex, age, disability, sexual orientation, gender identity, genetic information, and retaliation for reporting, participating in, and/or opposing a discriminatory practice.

United States labor law sets the rights and duties for employees, labor unions, and employers in the United States. Labor law's basic aim is to remedy the "inequality of bargaining power" between employees and employers, especially employers "organized in the corporate or other forms of ownership association". Over the 20th century, federal law created minimum social and economic rights, and encouraged state laws to go beyond the minimum to favor employees. The Fair Labor Standards Act of 1938 requires a federal minimum wage, currently $7.25 but higher in 28 states, and discourages working weeks over 40 hours through time-and-a-half overtime pay. There is no federal law requiring paid holidays or paid family leave, and limited state laws. The Family and Medical Leave Act of 1993 creates a limited right to 12 weeks of unpaid leave in larger employers. There is no automatic right to an occupational pension beyond federally guaranteed social security, but the Employee Retirement Income Security Act of 1974 requires standards of prudent management and good governance if employers agree to provide pensions, health plans or other benefits. The Occupational Safety and Health Act of 1970 requires employees have a safe system of work.

Executive Order 8802 was signed by President Franklin D. Roosevelt on June 25, 1941, to prohibit ethnic or racial discrimination in the nation's defense industry. It also set up the Fair Employment Practice Committee. It was the first federal action, though not a law, to promote equal opportunity and prohibit employment discrimination in the United States. Many citizens of Italian or German ethnicity were affected by World War II and this was impeding the war effort and lowering morale. This ethnic factor was a major motivation for Roosevelt. The President's statement that accompanied the Order cited the war effort, saying that "the democratic way of life within the nation can be defended successfully only with the help and support of all groups," and cited reports of discrimination:

There is evidence available that needed workers have been barred from industries engaged in defense production solely because of considerations of race, creed, color or national origin, to the detriment of workers' morale and of national unity.

Executive Order 11246, signed by President Lyndon B. Johnson on September 24, 1965, established requirements for non-discriminatory practices in hiring and employment on the part of U.S. government contractors. It "prohibits federal contractors and federally assisted construction contractors and subcontractors, who do over $10,000 in Government business in one year from discriminating in employment decisions on the basis of race, color, religion, sex, or national origin." It also requires contractors to "take affirmative action to ensure that applicants are employed, and that employees are treated during employment, without regard to their race, color, religion, sex or national origin." The phrase affirmative action had appeared previously in Executive Order 10925 in 1961. 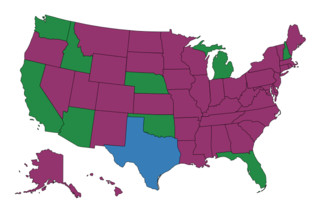 Affirmative action in the United States is a set of laws, policies, guidelines, and administrative practices "intended to end and correct the effects of a specific form of discrimination" that include government-mandated, government-approved, and voluntary private programs. The programs tend to focus on access to education and employment, granting special consideration to historically excluded groups, specifically racial minorities or women. The impetus toward affirmative action is redressing the disadvantages associated with past and present discrimination. Further impetus is a desire to ensure public institutions, such as universities, hospitals, and police forces, are more representative of the populations they serve.

Employment discrimination law in the United States derives from the common law, and is codified in numerous state, federal, and local laws. These laws prohibit discrimination based on certain characteristics or "protected categories." The United States Constitution also prohibits discrimination by federal and state governments against their public employees. Discrimination in the private sector is not directly constrained by the Constitution, but has become subject to a growing body of federal and state law, including the Title VII of the Civil Rights Act of 1964. Federal law prohibits discrimination in a number of areas, including recruiting, hiring, job evaluations, promotion policies, training, compensation and disciplinary action. State laws often extend protection to additional categories or employers.

A marriage bar is the practice of restricting the employment of married women. Common in Western countries throughout the 1900s, the practice often called for the termination of the employment of a woman on her marriage, especially in teaching and clerical occupations. Further, widowed women with children were still considered to be married at times, preventing them from being hired, as well.

Statistical discrimination is a theorized behavior in which racial or gender inequality results when economic agents have imperfect information about individuals they interact with. According to this theory, inequality may exist and persist between demographic groups even when economic agents are rational and non-prejudiced. It stands in contrast with taste-based discrimination which uses racism, sexism and the likes to explain different labour market outcomes of groups.

The Fair Employment Practice Committee (FEPC) was created in 1941 in the United States to implement Executive Order 8802 by President Franklin D. Roosevelt "banning discriminatory employment practices by Federal agencies and all unions and companies engaged in war-related work." That was shortly before the United States entered World War II. The executive order also required federal vocational and training programs to be administered without discrimination. Established in the Office of Production Management, the FEPC was intended to help African Americans and other minorities obtain jobs in home front industries during World War II. In practice, especially in its later years, the Committee also tried to open up more skilled jobs in industry to minorities, who had often been restricted to lowest-level work. The FEPC appeared to have contributed to substantial economic improvements among black men during the 1940s by helping them gain entry to more skilled and higher-paying positions in defense-related industries.

Ban the Box is the name of an American campaign by advocates for ex-offenders, aimed at removing the check box that asks if applicants have a criminal record from hiring applications. Its purpose is to enable ex-offenders to display their qualifications in the hiring process before being asked about their criminal records. The premise of the campaign is that anything that makes it harder for ex-offenders to find a job makes it likelier that they will re-offend, which is bad for society.