The University of Missouri Press is a university press operated by the University of Missouri in Columbia, Missouri and London, England; it was founded in 1958 primarily through the efforts of English professor William Peden. [3] Many publications are by, for, and about Missourians. The press also emphasizes the areas of American and world history; military history; intellectual history; biography; journalism; African American studies; women's studies; American, British, and Latin American literary criticism; political science; regional studies; and creative nonfiction. The press has published 2,000 books since its founding and currently publishes about 30 mostly academic books a year.

Among its notable publications were:

The university proposed in spring 2012 to close the press and terminate its ten employees in order to end the university's subsidy to the press, estimated by the university administration as $400,000 per year and by outside critics of the closure decision as under $250,000 a year. [16] The decision was reversed in August 2012 after public outcry. [17] As part of the reorganization the press now reports up to the main Columbia campus rather than the University of Missouri System. [18] A new director was hired in 2013.

Samuel Langhorne Clemens, known by his pen name Mark Twain, was an American writer, humorist, entrepreneur, publisher, and lecturer. He was praised as the "greatest humorist the United States has produced", and William Faulkner called him "the father of American literature". His novels include The Adventures of Tom Sawyer (1876) and its sequel, Adventures of Huckleberry Finn (1884), the latter of which has often been called the "Great American Novel". Twain also wrote Pudd'nhead Wilson (1894) and A Connecticut Yankee in King Arthur's Court (1889).

Eric Voegelin was a German-American political philosopher. He was born in Cologne, and educated in political science at the University of Vienna, where he became an associate professor of political science in the law faculty. In 1938, he and his wife fled from the Nazi forces which had entered Vienna. They emigrated to the United States, where they became citizens in 1944. He spent most of his academic career at Louisiana State University, the University of Munich and the Hoover Institution of Stanford University.

The Meuse–Argonne offensive was a major part of the final Allied offensive of World War I that stretched along the entire Western Front. It was fought from September 26, 1918, until the Armistice of November 11, 1918, a total of 47 days. The Meuse–Argonne offensive was the largest in United States military history, involving 1.2 million American soldiers. It is also the deadliest battle in the history of the United States Army, resulting in over 350,000 casualties, including 28,000 German lives, 26,277 American lives and an unknown number of French lives. American losses were worsened by the inexperience of many of the troops, the tactics used during the early phases of the operation and the widespread onset of the global influenza outbreak called the "Spanish flu". 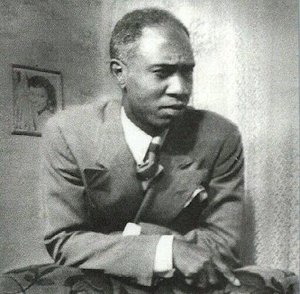 Melvin Beaunorus Tolson was an American poet, educator, columnist, and politician. As a poet, he was influenced both by Modernism and the language and experiences of African Americans, and he was deeply influenced by his study of the Harlem Renaissance.

"Let America Be America Again" is a poem written in 1935 by American poet Langston Hughes. It was originally published in the July 1936 issue of Esquire Magazine. The poem was republished in the 1937 issue of Kansas Magazine and was revised and included in a small collection of Langston Hughes poems entitled A New Song, published by the International Workers Order in 1938.

In political theory and theology, to immanentize the eschaton is a pejorative term referring to attempts to bring about utopian conditions in the world, and to effectively create heaven on earth. Theologically, the belief is akin to postmillennialism as reflected in the Social Gospel of the 1880–1930 era, as well as Protestant reform movements during the Second Great Awakening in the 1830s and 1840s such as abolitionism. 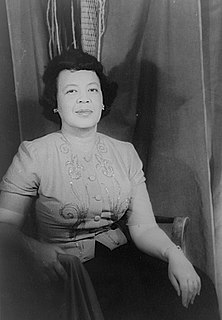 Margaret Allison Bonds was an American composer, pianist, arranger, and teacher. One of the first Black composers and performers to gain recognition in the United States, she is best remembered today for her popular arrangements of African-American spirituals and frequent collaborations with Langston Hughes.

Percy Ernst Schramm was a German historian who specialized in art history and medieval history. Schramm was a Chair and Professor of History at the University of Göttingen from 1929 to 1963.

Hans Ansgar Ostrom is an American professor, writer, editor, and scholar. Ostrom is a Professor of African American Studies and English the University of Puget Sound (1983–present), where he teaches courses on African-American literature, creative writing, and poetry as a genre. He is known for his authorship of various books on African-American studies and creative writing, and novels including Three to Get Ready, Honoring Juanita, and Without One, as well as The Coast Starlight: Collected Poems 1976–2006.

Metaxy is defined in Plato's Symposium via the character of the priestess Diotima as the "in-between" or "middle ground".

Robert Hugh Ferrell was an American historian and a prolific author or editor of more than 60 books on a wide range of topics, including the U.S. presidency, World War I, and U.S. foreign policy and diplomacy. One of the country's leading historians, Ferrell was widely considered the preeminent authority on the administration of Harry S. Truman, and also wrote books about half a dozen other 20th-century presidents. He was thought by many in the field to be the "dean of American diplomatic historians", a title he disavowed.

Etty Hillesum and the Flow of Presence: A Voegelinian Analysis is a 2008 book by Dutch philosopher Meins G. S. Coetsier, According to WorldCat, the book is held in 781 libraries.

Eugene Webb is Professor Emeritus in the University of Washington Henry M. Jackson School of International Studies. Webb holds a Ph.D., in Comparative Literature from Columbia University (1965), an M.A. in English Literature from Columbia University (1962) and also a B.A., in Philosophy from the University of California, Los Angeles (1960). Webb was a member of the faculties of both the Comparative Literature Department and the Henry M. Jackson School of International Studies, where he served as Associate Director and chaired programs in both Comparative Religion and European Studies (1994). Webb was also the founder of those two programs: Comparative Religion in 1974, and European Studies in 1994. He retired from the University of Washington in 2000, where he now has the title Professor Emeritus of International Studies. Webb has two books on the novels and plays of Samuel Beckett, and has authored the books The Dark Dove: The Sacred and Secular in Modern Literature (1975), Eric Voegelin, Philosopher of History (1981), Philosophers of Consciousness (1988) and The Self Between: From Freud to the New Social Psychology of France (1993), all published by the University of Washington Press. His book World View and Mind: Religious Thought and Psychological Development was published by the University of Missouri Press in 2009, and his In Search of the Triune God: The Christian Paths of East and West was published by the same press in 2014. Webb translated and wrote the introduction to Jean-Michel Oughourlian's, The Puppet of Desire: The Psychology of Hysteria, Possession, and Hypnosis,. He also translated a second book by Oughourlian, The Genesis of Desire, published by Michigan State University Press in 2010.

Ellis Sandoz is the Hermann Moyse Jr. Distinguished Professor of Political Science and Director of the Eric Voegelin Institute for American Renaissance Studies at Louisiana State University. Sandoz is also the former chairman of that department.

James Mercer Langston Hughes was an American poet, social activist, novelist, playwright, and columnist from Joplin, Missouri. One of the earliest innovators of the literary art form called jazz poetry, Hughes is best known as a leader of the Harlem Renaissance. He famously wrote about the period that "the Negro was in vogue", which was later paraphrased as "when Harlem was in vogue." 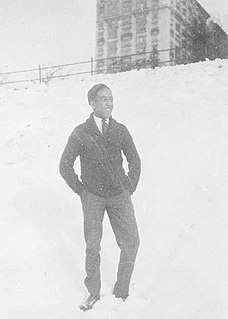 "The Negro Speaks of Rivers" is a poem by American writer Langston Hughes. Hughes wrote the poem when he was 17 and crossing the Mississippi River on the way to visit his father in Mexico. It was first published the following year in The Crisis, starting Hughes's literary career. "The Negro Speaks of Rivers" uses rivers as a metaphor for Hughes's life and the broader African-American experience. It has been reprinted often and is considered one of Hughes's most famous and signature works. 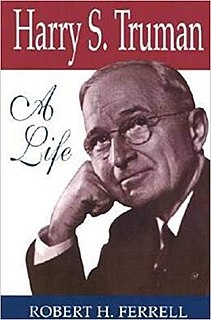 Harry S. Truman: A Life is a 1994 biography of Harry S. Truman, president of the United States from 1945 to 1953, by historian Robert Hugh Ferrell. Although it was overshadowed by the popular success of David McCullough's Pulitzer-winning biography Truman, Ferrell's book was widely praised by scholars in his field.

"Harlem" is a poem by Langston Hughes. These eleven lines ask, "What happens to a dream deferred?", providing reference to the African-American experience. It was published as part of a longer volume-length poem suite in 1951 called Montage of a Dream Deferred, but is often excerpted from the larger work. The play A Raisin in the Sun was titled after a line in the poem.