Truman the Tiger is the official mascot of the athletic teams of the University of Missouri Tigers. [1] Truman is named after U.S. President Harry S. Truman, who was from the U.S. state of Missouri. The mascot was named on September 12, 1986, though the use of a Bengal tiger as Missouri's mascot is traced to the 1890s. Truman has been awarded "best mascot in the nation" several times, most recently in 2014. [2]

Truman is best known to Mizzou fans for his "tail-spin" during the "Missouri Waltz", doing push-ups with the ROTC after the Tigers score, and for riding into home football games on a 1950s-vintage Boone County fire truck ("Truman's Taxi"), painted gold and black and outfitted with several Missouri flags. The mascot makes hundreds of appearances statewide at university functions, sporting events and at private parties, where he can be hired for a small donation. Actors playing Truman, in contrast to at other schools, are semi-public: they are usually introduced as "Truman" during Senior Night festivities at the last home football and basketball games of the year. On the day of the 2011 Independence Bowl featuring Missouri and North Carolina, Truman accidentally broke the crystal bowl that was part of the trophy to be awarded to the victorious team.

In 1864, while in the midst of the American Civil War, the board of curators suspended operations of the university. It was during this time that the residents of Columbia formed a "home guard" unit that became notoriously known as the "Fighting Tigers of Columbia". This name was given because of the group's steadfast readiness to fight against Confederate bushwhackers, hoping to plunder the city and university, under the command of "Bloody Bill" Anderson. Later, in 1890, an alumnus suggested the university's newly formed football team be called the "Tigers" out of respect for those who fought to defend Columbia.

"The Tiger" was the official mascot of the University of Missouri before Truman took his place in 1986. Truman's predecessor was a "plain grey" tiger with black stripes that was simply known as "The Tiger". "The Tiger" was officially replaced by "Truman The Tiger" before the 1986 football season.

The Memphis Tigers are the athletic teams that represent the University of Memphis, located in Memphis, Tennessee. The teams compete at the National Collegiate Athletic Association (NCAA) Division I level as a member of the American Athletic Conference, except for the rifle team, which is a member of the single-sport Great America Rifle Conference. 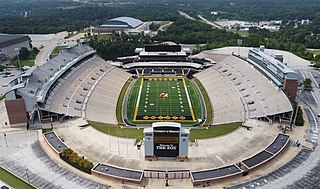 Faurot Field, at Memorial Stadium is a stadium in Columbia, Missouri, United States, on the campus of the University of Missouri. It is primarily used for football and serves as the home field for the Missouri Tigers football program. It is the third-largest sports facility by seating capacity in the state of Missouri, behind The Dome at America's Center in St. Louis and Arrowhead Stadium in Kansas City. In 1972, Memorial Stadium's playing surface was named Faurot Field in honor of longtime coach Don Faurot.

The Missouri Tigers intercollegiate athletics programs represent the University of Missouri, located in Columbia. The name comes from a band of armed Union Home Guards called the Fighting Tigers of Columbia who, in 1864, protected Columbia from Confederate guerrillas during the American Civil War. 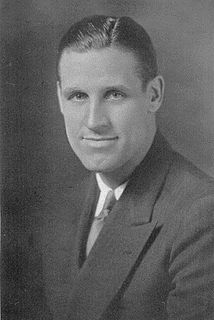 Donald Burrows Faurot was an American football and basketball player, coach, and college athletics administrator best known for his eight-decade association with the University of Missouri. He served as the head football coach at Northeast Missouri State Teachers College—commonly known at the time as Kirksville State Teachers College and now known as Truman State University—from 1926 to 1934 and at Missouri from 1935 to 1942 and again from 1946 to 1956. During World War II, Faurot coached the Iowa Pre-Flight Seahawks in 1943 and the football team at Naval Air Station Jacksonville in 1944. He was also the head basketball coach at Kirksville State from 1925 to 1934, tallying a mark of 92–74. Faurot was the athletic director at Missouri from 1935 to 1942 and again from 1946 to 1967. He lettered in three sports at Missouri in the early 1920s: in football, as a halfback, basketball and baseball.

Braggin' Rights is the annual men's college basketball contest between the University of Illinois Fighting Illini of the Big Ten Conference and University of Missouri Tigers of the SEC.

Marching Mizzou, M2, or The Big 'M' of the Midwest is the performing marching band for the University of Missouri, founded in 1885 as a college military band. Originally consisting of only 12 members, it is now the largest student organization on the MU campus, drawing students from nearly every major. Marching Mizzou performs at all home football games of the Missouri Tigers football team, in addition to other university events; and expanded Mini Mizzou travels to two away games per season, while the entire band regularly follows the team to conference championship games and bowl games. Marching Mizzou's signature drill "Flip Tigers" has been a well-known tradition of its pre-game show since 1960. It is instructed by University of Missouri School of Music faculty.

The Border War is the name given to the Kansas–Missouri rivalry. It has been officially named the Border Showdown since 2004. It is a college rivalry between athletic teams from the University of Kansas and University of Missouri, the Kansas Jayhawks and the Missouri Tigers, respectively. Athletic competition between the two schools began in 1891. From 1907 to 2012 both schools were in the same athletic conference and competed annually in all sports. Sports Illustrated described the rivalry as the oldest rivalry west of the Mississippi River in 2011, but it has been dormant since Missouri departed the Big 12 Conference for the Southeastern Conference on July 1, 2012. Despite Missouri wanting to continue athletic competition, no further regular season games were scheduled between the two schools for several years. However, the two schools played an exhibition game in men's basketball on October 22, 2017, with Kansas defeating Missouri 93–87. Proceeds went to four different charities for Hurricane Harvey and Hurricane Maria relief funds. On October 21, 2019, the schools agreed to play six basketball games beginning in 2020, however, due to the COVID-19 pandemic, the renewal was postponed one season. Then, on May 2, the schools made an agreement for football games to be played in 2025, 2026, 2031, and 2032.

The Missouri–Nebraska football rivalry was an American college football rivalry between the Missouri Tigers and Nebraska Cornhuskers. The rivalry was the second oldest in the Big 12 Conference and third oldest west of the Mississippi River. However, it ended following the 2010 game, when Nebraska and Missouri met in league play for the last time prior to Nebraska's 2011 move to the Big Ten Conference. In November 2011, Missouri announced that it would join the Southeastern Conference in July 2012.

The 1960 Missouri Tigers football team was an American football team that represented the University of Missouri in the Big Eight Conference during the 1960 NCAA University Division football season. The team compiled an 11–0 record, won the Big 8 championship, defeated Navy in the Orange Bowl, was ranked No. 5 in the final AP Poll, and outscored its opponents 295 to 93. Led by third-year head coach Dan Devine, the team played its home games at Memorial Stadium in Columbia, Missouri.

The 2009 Missouri Tigers football team, represented the University of Missouri in the 2009 NCAA Division I FBS football season. The team was coached by Gary Pinkel, who returned for his ninth season with Mizzou, and played their home games at Faurot Field at Memorial Stadium. Changes to Memorial Stadium for the 2009 season included a new scoreboard and expanded seating capacity following a reconfiguration of the student seating section.

The 2013 Missouri Tigers football team represented the University of Missouri in the 2013 NCAA Division I FBS football season. It marked the Tigers' second season as a member of the Southeastern Conference (SEC) in the Eastern Division. The team was led by head coach Gary Pinkel, in his 13th year and played its home games at Faurot Field in Columbia, Missouri. The Tigers went into the season hoping to return to a bowl game after missing out the previous season. They succeeded after an 11–1 regular season and their first-ever SEC Eastern Division title. After a loss to Auburn in the SEC Championship Game they played in the 2014 Cotton Bowl Classic on January 3, 2014 against Oklahoma State, which they won 41–31. The two teams had last met on October 22, 2011. 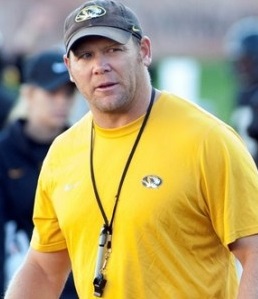 Barry Stephen Odom is an American football coach and currently the defensive coordinator at the University of Arkansas. He is the former head football coach of the Missouri Tigers football team.

The 2017 Missouri Tigers football team represented the University of Missouri in the 2017 NCAA Division I FBS football season. The Tigers played their home games at Faurot Field in Columbia, Missouri and competed in the Eastern Division of the Southeastern Conference (SEC). They were led by second-year head coach Barry Odom. They finished the season 7–6, 4–4 in SEC play to finish in a tie for third place in the Eastern Division. They were invited to the Texas Bowl where they lost to Texas.

Ron Taylor was an American football coach and player. As the starting quarterback at the University of Missouri, he led the Tigers to back-to-back Orange Bowl appearances during 1959 and 1960 seasons.

The 2019 Missouri Tigers football team represented the University of Missouri in the 2019 NCAA Division I FBS football season. The Tigers played their home games at Faurot Field as members of the Eastern Division of the Southeastern Conference. The Tigers were led by fourth-year head coach Barry Odom in his final season with the team.