Unknown AL Soldier C.S.A. "Mother, I have been found. I am home."

"It sits among existing monuments, replica cannons and tall flagpoles flying Confederate and other flags." [1] More than 500 people attended the monument's dedication in 2017. [3] Another source gives the number as 200. [1]

Brantley is a city in Crenshaw County, Alabama, United States. At the 2010 census the population was 809. Brantley was incorporated in 1891 as a city.

The United Daughters of the Confederacy (UDC) is an American hereditary association of Southern women established in 1894 in Nashville, Tennessee. The organization's activities include the commemoration of Confederate Civil War soldiers and the funding of monuments to them. Many historians have described the organization's portrayal of the Confederate States of America (CSA) and the Civil War as a promotion of the Lost Cause and of white supremacy, and have asserted that the elevation of the Confederate tradition has been led by the UDC. In the early 1900s the organization often applauded the Ku Klux Klan and funded the building of a monument to the Klan in 1926. The UDC has been labeled as neo-Confederate by the Southern Poverty Law Center.

Confederate Memorial Day is a cultural holiday observed in several Southern U.S. states on various dates since the end of the Civil War to remember the estimated 258,000 Confederate soldiers who died in military service. 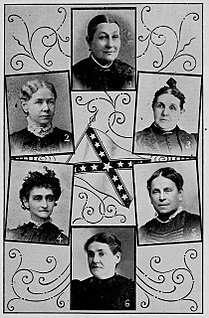 A Ladies' Memorial Association (LMA) is a type of organization for women that sprang up all over the American South in the years after the American Civil War. Typically, these were organizations by and for women, whose goal was to raise monuments in Confederate soldiers honor. Their immediate goal, of providing decent burial for soldiers, was joined with the desire to commemorate the sacrifices of Southerners and to propagate the Lost Cause of the Confederacy. Between 1865 and 1900, these associations were a formidable force in Southern culture, establishing cemeteries and raising large monuments often in very conspicuous places, and helped unite white Southerners in an ideology at once therapeutic and political.

Old Live Oak Cemetery, where th newer portion is sometimes called New Live Oak Cemetery and the cemetry is collectively known as Live Oak Cemetery, is an historic cemetery in Selma, Alabama founded in 1829 and expanded in 1877. It contains burials of Confederate States of America leaders as well Benjamin Sterling Turner, an African-American who served as U.S. Representative for Alabama during the Reconstruction era. The cemetery is at 110 Dallas Avenue approximately 0.7 miles west of downtown Selma.

The Confederate Soldiers and Sailors Monument was a large granite monument that sat at the south entrance of Garfield Park in Indianapolis for nearly a century, before being removed in 2020. It commemorated the Confederate prisoners of war that died at Camp Morton. At 35 feet (11 m) tall and located in the city's oldest public park, it had been the most prominent of the very few Confederate memorials in the Union state of Indiana. It was dismantled and removed by the city of Indianapolis in June 2020 after a yearslong debate, part of a national wave of removal of Confederate memorials during the Black Lives Matter movement.

Removal of Confederate monuments and memorials is an ongoing process in the United States since the 1960s. Many municipalities in the United States have removed monuments and memorials on public property dedicated to the Confederate States of America (CSA), and some, such as Silent Sam in North Carolina, have been torn down by protestors. The momentum to remove Confederate memorials increased dramatically following the high-profile incidents including the Charleston church shooting (2015), the Unite the Right rally (2017), and the killing of George Floyd (2020). The removals have been driven by the belief that the monuments glorify white supremacy, memorialize an unrecognized, treasonous government whose founding principle was the perpetuation of slavery, and that the presence of these Confederate memorials over a hundred years after the subjugation of the Confederacy continues to disenfranchise and alienate African Americans. 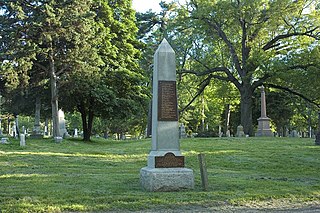 The Union Confederate Monument, also known as the Unknown Confederate Gravesite Monument, is an outdoor Confederate memorial installed in Kansas City, Missouri's Union Cemetery, in the United States. The 15-foot (4.6 m) granite obelisk monument was erected by the U.S. government in 1911 to commemorate the 15 Confederate prisoners of war buried at the site. The exact location of their individual graves is unknown. The memorial includes two bronze tablets displaying the names of the prisoners, who were captured during the Battle of Westport.

The Confederate Soldiers and Sailors Monument was a commemorative obelisk that was erected in Linn Park, Birmingham, Alabama in 1905. The monument was dismantled and removed in 2020.

Robert E. Lee on Traveller is a bronze sculpture by Alexander Phimister Proctor depicting the Confederate general of the same name, his horse Traveller, and a young Confederate States Army officer, formerly installed at Dallas' Lee Park, in the U.S. state of Texas. The statue was unveiled by President Franklin D. Roosevelt in 1936, removed in 2017, and sold by the city for $1,435,000 to a law firm. It now stands on a Texan golf course.

A statue of Charles Linn was previously installed in Birmingham, Alabama's Linn Park, in the United States. 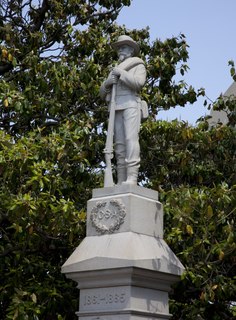 The Confederate Soldier Memorial, or Confederate Monument, is located in the Maple Hill Cemetery in Huntsville, Alabama.