Uppekha Jain was born in a Jain family in Jammu. She grew up in the Greater Toronto Area and though studious, she was always encouraged to explore the arts. Jain is an accomplished kathak and bharatnatyam dancer, having performed across the world as a Company A dancer with Toronto's finest Classical Indian Dance Institute Sampradaya Dance Creations, under the tutelage of the renowned Lata Pada. Jain spent her teenage years in Mississauga enrolled in the International Business & Technology program at Gordon Graydon Memorial Secondary School and later transferred to The Woodlands School. She graduated high school at the top of her class and was admitted into the BBA program at Wilfrid Laurier University. After graduating with honours, Uppekha was hired as an Associate Brand Manager at Cadbury Adams, where she worked for just over a year before quitting her promising corporate career to pursue her passion for the arts. While working at Cadbury, Uppekha continued to perform with her dance group and also enrolled in various acting courses including with Toronto's renowned Sear's & Switzer Acting School. It was at that time she won the Miss India Worldwide Canada and Miss India Worldwide 1st Princess titles in 2008, 2009. She also went home with the titles of Miss Beautiful Smile & Miss Talented. Soon after came a role in the Mike Myers and Jessica Alba-starrer The Love Guru . Following which, she acted in various commercials in the GTA. But Mumbai called and Jain packed her bags and moved to the City of Dreams in 2011.[ citation needed ]

While navigating her way across unknown plains in Mumbai, Uppekha was lucky to bag her very first commercial/ad opposite Bollywood superstar Shah Rukh Khan. There after came a slew of ads for various brands and with various Bollywood stars, including Hoppits with Priyanka Chopra, Yardley and Line App with Katrina Kaif, Just Dance with Hrithik Roshan, Simply Learn with Irfan Khan and various others for household brands including Parle, Dove, Pantene, Maruti, Karbonn Mobile, Blackberry, Mumbai Midday, Koryo, and others.

Uppekha acted in leading roles for the independent features [The Interview] and Moods of Crime, and a supporting role in Yash Raj Films first Y Film Luv Ka The End . Uppekha also built a successful career as a live show anchor/emcee, hosting over 300 events for various corporate, celebrity and televised shows both in Indian and internationally. She is a sought after celebrity anchor in Indian and North America today.

In addition to film acting, Uppekha is also a theater actress and was a permanent cast member of the Indian rendition of Eve Ensler's off-Broadway play Emotional Creatures , a play that shed light on atrocities and the secret lives of girls across the world. She also performed in various other theatre productions in India.

In 2015 Uppekha wrote, co-produced and performed in a YouTube video entitled #RapAgainstRape that garnered international acclaim from top publications including The Huffington Post, The Wall Street Journal, NRI Tribune, [1] Cosmopolitan and a host of other publications as well as news shows. The video slammed misogyny and the regressive mindset still present in India while bringing awareness to the atrocities women face and including rape, assault and hypocrisy in India. [2]

In 2016 Uppekha bagged the permanent cast role on Star Plus's long-running hit soap opera Saath Nibhana Saathiya . Her conniving yet fashionable character of Monika Modi struck a chord with audiences and the mother-in-law + daughter-in-law "jodi" with co-star Lovey Sasan became widely popular. In March 2017 though, both Lovey and Uppekha decided to quit the show. According to sources, Jain was not happy with the track of her character.

Gauahar Khan Darbar is an Indian model and actress. After pursuing modeling, she made her acting debut with Yash Raj Films' Rocket Singh: Salesman of the Year (2009). Khan also starred in films such as the action thriller Game (2011), the revenge drama Ishaqzaade (2012), the suspense thriller Fever (2016), the romantic comedy Badrinath Ki Dulhania (2017) and the Indian period drama Begum Jaan (2017).

Amar Upadhyay is an Indian television actor and model known for his roles of Mihir Virani and Dharam Suryavanshi in the long running soap operas Kyunki Saas Bhi Kabhi Bahu Thi and Saath Nibhaana Saathiya respectively, both of which aired on Star Plus. He was a contestant on the reality show Bigg Boss 5 in 2011.

Giaa Manek is an Indian television actress. Before venturing into the television industry, she played a minor role in the 2010 Hindi comedy film Na Ghar Ke Na Ghaat Ke. Popular television shows to her credit are Star Plus's Saath Nibhaana Saathiya and SAB TV's Jeannie Aur Juju. In 2012, she had participated in the dance reality show Jhalak Dikhhla Jaa 5. 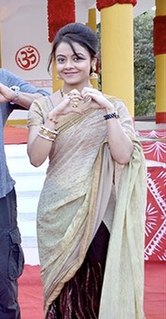 Vandana Pathak is an Indian film, stage and television actress. She is popular for her role as Jayshree Parekh in the Khichdi franchise; as well as her antagonistic role of Gaura in the soap opera Saath Nibhaana Saathiya. She has played many Gujarati roles in Indian serials. In a career spanning more than two decades, she has most of her memorable work in comedy plays and sitcoms.

Zoya Afroz, is an Indian actress and model who appears in Hindi films. Her first appearance was as a child artist in the television series Kora Kagaz in 1998 and continued to do so in films Hum Saath Saath Hain (1999), Mann (1999) and Kuch Naa Kaho (2003). In 2014, Afroz made her Bollywood screen debut as an adult in the thriller film The Xposé, which emerged as a commercial success. Afroz has also worked in various television commercials as a child artist. In 2013, competed in the Femina Miss India 2013 pageant, where she was crowned as second runner-up.

Rupal Patel is an Indian actress best known for portraying Kokila Parag Modi in the drama series Saath Nibhaana Saathiya and its sequel, and in Yeh Rishtey Hain Pyaar Ke as Meenakshi Rajvansh.

Shagufta Ali is an Indian film and television actress. She is known for her roles in Punar Vivah, Ek Veer Ki Ardaas...Veera, Sasural Simar Ka and Saath Nibhaana Saathiya. In 2018, she was seen in Colors TV's Bepannaah. She has danced in an item song in Tamil movie uzhaippali with super star Rajnikanth

Loveleen Kaur Sasan also known as Lovey is an Indian television actress, working in Indian soap operas. She is mainly recognised for her role of Paridhi Modi in Star Plus' show Saath Nibhaana Saathiya.

Jaya Ojha is an Indian film, stage, and television actress and singer known for her work in Indian soap operas. She is known for her role as Mandodari in the 2000s epic TV series Ramayan. She played a supporting role in the long-running soap opera Saath Nibhaana Saathiya on channel Star Plus. She played the role of Malti in Badho Bahu.

Sonam Lamba is an Indian television actress known for her character of Vidya Modi in Saath Nibhaana Saathiya on Star Plus. 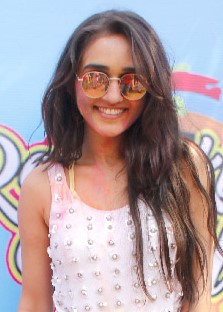 Priya Tandon is an Indian television and film actress.

Saath Nibhaana Saathiya 2 is an Indian television drama series produced under Rashmi Sharma Telefilms. It premiered on 19 October 2020 on Star Plus. Based on Star Jalsha's Bengali series Ke Apon Ke Por, it serves as a sequel and a spin off to the series Saath Nibhaana Saathiya. It stars Sneha Jain and Harsh Nagar.