Upper Ten Thousand, or simply, The Upper Ten, is a 19th-century phrase referring to wealthiest 10,000 residents of New York City. The phrase was coined in 1844 by American poet and author Nathaniel Parker Willis. [1] Soon, the term came to be used to describe the upper circles not only of New York, but also those of other major cities. [2]

In 1852, Charles Astor Bristed published a collection of sketches on New York Society entitled "The Upper Ten Thousand" in Fraser Magazine. In 1854, George Lippard serialized his book New York: Its Upper Ten and Lower Million. The phrase also appeared in British fiction in The Adventures of Philip (1861–62) by William Thackeray, whose eponymous hero contributed weekly to a fashionable New York journal entitled The Gazette of the Upper Ten Thousand. [3] The general acceptance of the term seems to be attested by its use in the title of Edward Abbott's 1864 cookery book, The English and Australian Cookery Book: Cookery for the Many as Well as the "Upper Ten Thousand".

In 1875, both Adam Bissett Thom and Kelly's Directory published books entitled The Upper Ten Thousand, which listed members of the aristocracy, the gentry, officers in the British Army and Navy, members of Parliament, colonial administrators, and members of the Church of England. The usage of this term was a response to the broadening of the British ruling class which had been caused by the Industrial Revolution.

Most of the people listed in Kelly's Handbook to the Upper Ten Thousand were among the 30,000 descendants of Edward III, King of England, tabulated in the Marquis of Ruvigny and Raineval's Plantagenet Roll of the Blood Royal. [4] Most also appeared in Walford's County Families and Burke's Landed Gentry .

Ralph William Lyonel Tollemache-Tollemache, MA, JP was a British clergyman in the Church of England. He is best known for the unusual and increasingly eccentric names that he chose for his numerous children.

Colonel Theophilus John Levett was a Conservative Party politician in the United Kingdom, who served as Member of Parliament (MP) for Lichfield from 1880 to 1885.

William Mundy was the son of Francis Mundy, a member of parliament for South Derbyshire. He was a justice of the peace, MP and, in 1844, High Sheriff of Derbyshire.

Francis Edward Fitzherbert-Stafford, 12th Baron Stafford, DSO was an English peer and British Army officer, holding the title Baron Stafford. His lifetime marked the point where the Stafford barony first came into contact with Fitzherbert as a surname.

Rowland Smith was an English Conservative politician who sat in the House of Commons from 1868 to 1874.

Edward Anthony Holden was a landowner who lived at Aston Hall, in Aston upon Trent, Derbyshire. He inherited land and bought more starting in 1833. He was High Sheriff of Derbyshire in 1838/9. By the time of his death he had created an estate of over 2,000 acres (8.1 km2) of land in Derbyshire and Leicestershire.

Melville Amadeus Henry Douglas Heddle de La Caillemotte de Massue de Ruvigné, "9th Marquis of Ruvigny and 15th of Raineval" was a British genealogist and author, who was twice president of the Legitimist Jacobite League of Great Britain and Ireland.

Richard Townsend was an Irish politician. 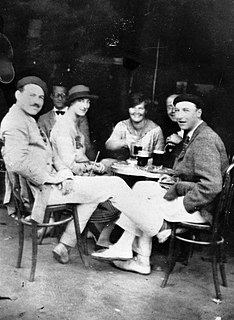 Mary Duff Stirling, Lady Twysden was a British socialite best known for being the model for Brett Ashley in Ernest Hemingway's novel The Sun Also Rises.

Frederic Chatfield Smith was head of Smith's Bank in Nottingham and a British Conservative Party politician.

Susan Charlotte Catherine, Lady Adolphus Vane-Tempest, born Lady Susan Charlotte Catherine Pelham-Clinton, was a British noblewoman and one of the mistresses of King Edward VII of England when he was Prince of Wales. Lady Susan was a bridesmaid to Victoria, Princess Royal, and two years later became the wife of Lord Adolphus Vane-Tempest. She took the Prince as her lover in about 1864 following her husband's death, and allegedly gave birth to his illegitimate child in 1871.

The Very Rev Charles Whitworth Robert Lloyd was an Anglican Priest in the 20th century.
Born on 28 June 1879, educated at Christ Church, Oxford and ordained in 1913, his first post was as Curate at St Thomas, Eccleston.. After this he was Priest in charge of St Martin Dundee and then of St Paul, Kinlochleven. He was Dean of Argyll and The Isles from 1933 to 1940.

John Arthur Pryor was a British Major and aristocrat, He resided at Bentworth Hall in Bentworth, East Hampshire and at Beamhurst Hall in Beamhurst, East Staffordshire with his wife Blanche Marion, their son and two daughters, between 1925 and 1930.