Uppinangady or Ubar is a town in the Dakshina Kannada district in the state of Karnataka. It is surrounded by the Kumaradhara River on one side and Nethravathi River on the other. When the town's two surrounding rivers rise during the rainy season and meet, this is called the "Sangam" which is a Sanskrit word for confluence. The Sangam is a major event as people from the surrounding villages crowd the river banks to witness the merge. The population of Uppinangady is 7,172.

In 1923 the town of Uppinangady was washed out due to excessive flooding, and its courts were moved to Puttur. Severe flooding also occurred in 1974.

The town of Uppinangady is situated at an altitude of 53 meters. Uppinangady is also known as "Dakshina Kashi". It is believed that there is also a sangam of a third river along with the other two rivers which is known as Guptagamini. It is famous for the Sahasralingeshwara Temple

Its legend dates back to the time of Mahabharata. The Skanda Purana states that when King Yudhisthira decided to perform the Rajasuya Yagna (to proclaim his sovereignty), he sent Bhima to present day Uppinangady. There, he was attacked by the huge giant animal named Purusha Mruga. To avoid attack, he dropped one of his hairs, which instantly turned into a Shivalinga. Seeing this, Purusha Mruga stopped to worship the Linga & then proceeded to attack. Bhima again dropped a hair, which turned into another Shivalinga. This happened for quite sometime. Finally, he dropped a handful of his hair, which instantly turned into a thousand Shivalingas. Purusha Mruga stopped to worship all the Lingas, giving time to escape. The Sangama (confluence) of Kumaradhara & Netravati rivers happen near the temple. However, during the monsoon, this confluence takes place directly in front of the sanctum sanctorum. It is considered an auspicious moment to bathe in the rivers' waters. It is also said that the 1000 Shivalingas, hidden deep in the sand, are revealed when the sand recedes.

Uppinangady is at the foothills of the Western Ghats in Dakhshina Kannada district, surrounded by forests. Uppinangady lies on National Highway 75 which connects Mangaluru to Bengaluru. There are frequent bus and taxi service from this place to Mangaluru and its taluk headquarters Puttur and also to Kukke Subramanya. The nearest railway station is Puttur Railway station located at a distance of 12 km. The nearest airport is Mangalore International airport 55 km away. 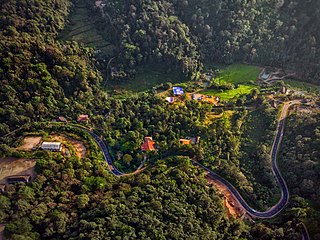 Kodagu is an administrative district in the Karnataka state of India. Before 1956, it was an administratively separate Coorg State, at which point it was merged into an enlarged Mysore State. It occupies an area of 4,102 square kilometres (1,584 sq mi) in the Western Ghats of southwestern Karnataka. In 2001 its population was 548,561, 13.74% of which resided in the district's urban centre, making it the least populous of the 30 districts in Karnataka.The nearest railway stations are Mysore Junction, located around 95 km away and Thalassery and Kannur in Kerala, at a distance of 79 km. The nearest airports are Kannur International Airport in Kerala and Mangalore International Airport.

The Tungabhadra River is a river in India that starts and flows through the state of Karnataka during most of its course, before flowing along the border between Telangana, Andhra Pradesh and ultimately joining the Krishna River near Gundimalla village in Jogulamba Gadwal district of Telangana.

The Netravati River or Netravathi Nadi has its origins at Bangrabalige valley, Yelaneeru Ghat in Kudremukh in Chikkamagaluru district of Karnataka, India. This river flows through the famous pilgrimage place Dharmasthala and is considered one of the holy rivers of India. It merges with the Kumaradhara River at Uppinangadi before flowing to the Arabian Sea, south of Mangalore city. This river is the main source of water to Bantwal and Mangalore. The Netravati railway bridge is one of the known bridges which serve as the gateway to Mangalore.

Dharmasthala is an Indian temple town on the banks of the Nethravathi River in the Belthangady taluk of the Dakshina Kannada district in Karnataka, India. It is a panchayat village, and it is the only village in its gram panchayat.

Surathkal is one of the major localities in the northern part of Mangalore city located on National highway 66 in the Dakshina Kannada district, Karnataka state, India on the shore of Arabian sea. It is a municipality merged with Mangalore City Corporation. It lies between Gurupura (Phalguni) and Pavanje (Nandini) rivers. It is the northern suburb & can be considered as the northernmost area of Mangalore City until Mukka. Surathkal is 1.5 km from Surathkal railway station, 8 km north of New Mangalore seaport, 8 km west of Mangalore Refinery & Petrochemicals Limited and 16 km west of Mangalore International Airport This region has developed educationally, industrially & commercially can be regarded as one of the crucial localities in Mangaluru & coastal Karnataka. The only NIT of Karnataka is situated here which is adjacent to the national highway NH 66. Mukka a popular name in Indian surfing is also situated close to Surathkal. Surathkal beach is well known for its cleanliness and well maintained like other beaches in Mangalore. 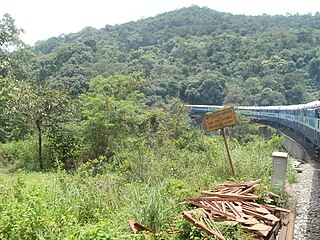 Sakleshpur, Sakleshpura or Sakleshapura(ಸಕಲೇಶಪುರ) is a hill station town and headquarters of Sakleshpur taluk in Hassan district in the Indian state of Karnataka.

Kukke Subramanya is a Hindu temple located in the village Subramanya, of Kadaba taluk in Dakshina Kannada district Karnataka. In this temple Kartikeya is worshipped as Subramanya, lord of all serpents. The epics relate that the divine serpent Vasuki and other serpents found refuge under Subramanya when threatened by the Garuda.

Subramanya is a village located in Sullia Taluk in Dakshina Kannada, India. The Kukke Subrahmanya Temple is located here. It is about 105 kilometres (65 mi) from Mangalore, connected by train and road. It was originally named "Kukke Pattana".

Sahasralinga is a pilgrimage place, located around 14 km from the Sirsi Taluk in the district of Uttara Kannada of Karnataka state in India. It is in the river Shalmala and is famous for being the location where around a thousand lingas are carved on rocks in the river and on its banks.

Charmadi Ghat (Charmady) is a Ghat in Belthangady taluk of Dakshina Kannada and Mudigere taluk of Chikkamagaluru. It is one of the points in Western ghats through which motorable road passes connecting Dakshina Kannada with Chikkamagaluru district. The section of ghat is known by the name of Charmadi Ghat. It lies on National Highway 73 which connects Mangaluru to Tumkuru. The nearest places are Charmadi village, Ujire, Belthangady, Puttur, Kottigehara, Balur and Kalasa Estate and Banakal.

Punacha is a village in the southern state of Karnataka, India. It is located in the Bantwal taluk of Dakshina Kannada district in Karnataka.

The Mahabaleshwar Temple, Gokarna is a 4th-century CE Hindu temple located in Gokarna, Uttara Kannada district, Karnataka state, India which is built in the classical Dravidian architectural style. It is a site of religious pilgrimage. The temple faces the Gokarna beach on the Arabian Sea in which Hindu pilgrims cleanse before visiting the temple for worship. The temple is considered as holy as the Shiva temple at Varanasi or Kāśi (Kashi) in North India on the banks of the Ganges River. Hence, the Mahabaleshwar temple, Gokarna is known as the Dakshin Kasi. The temple deifies the Pranalinga also called Atmalinga or Shiva Linga In legend, it is said that the deity of the temple will bestow immense blessings to devotees, even to those who only glimpse it. Currently the administrative charge of the temple is with an Overseeing Committee under the Chairmanship of Justice BN Srikrishna, a Retired Justice of the Hon'ble Supreme Court of India.

Dharmasthala Temple is an 800-year-old religious institution in the temple town of Dharmasthala in Dakshina Kannada, Karnataka, India. The deities of the temple are Shiva, who is referred to as Mañjunatha, Ammanavaru, the Tirthankara Chandraprabha and the protective gods of Jainism, Kalarahu, Kalarkayi, Kumarasvami and Kanyakumari. The temple is considered unique since it belongs to the Shaiva sect of Hinduism. The priests are Madhwa Brahmins, who are Vaishnava, and the administration is run by a Jain Bunt family called the Pergades.

Patrame is a small, rural panchayat village on the left (east) bank of the Netravati River in Karnataka, India. Administratively, it is under Belthangady taluk, Dakshina Kannada district, Karnataka. Patrame is the only village in its gram panchayat. The village of Patrame is 26 km from its taluk headquarters Belthangady, and 8 km by road from Dharmasthala.

Puttur Shree Mahalingeshwara Temple is a 12th-century temple, located in Puttur, Dakshina Kannada in the Indian state of Karnataka. Lord Shiva is the main deity.