Vagabond is the second novel in The Grail Quest series by Bernard Cornwell. Set during the first stage of the Hundred Years War, it follows Thomas of Hookton's quest to find the Holy Grail, a relic which will grant decisive victory to the possessor.

Arrows On The Hill Thomas, Eleanor and Father Hobbe journey to the north of England to speak with the old Monk Brother Collimore, who knows of the Holy Grail, in city of Durham. Unknown to them, the corrupt French Cardinal, Cardinal Bessières, has dispatched his own companion, The Dominican Friar, Bernard de Taillebourg to find the Holy Grail for France. He is accompanied by the murderer of Father Ralph, Guy Vexille, Comte d'Astarac. During their journey to Durham Thomas is caught up in the Scottish invasion. Thomas participates in the Battle of Neville's Cross against the Scottish. We learn that Eleanor is pregnant with Thomas's baby. Thomas is not ready to be a father. Eleanor is frustrated by Thomas' willingness to fight and goes on to the monastery with Father Hobbe. There Eleanor and Father Hobbe come across the old monk they seek who is talking with a Dominican and Vexille. Both Eleanor and Father Hobbe are killed by Vexille. Meanwhile, the Scots lose the battle and David II is captured. Thomas is devastated when he finds out the fate of Eleanor and again vows to kill Guy Vexille. He continues back to Hookton with Robbie Douglas, a captured Scottish noble.

The Winter Siege Thomas and Robbie travel to Hookton and find that the Dominican has also been to Hookton. Thomas meets with his old friend Sir Giles Marriott who gives him a book that his father wrote about the Grail. Thomas also receives a message from Sir Guillaume that he has been outlawed by France and his castle is under siege.

Thomas and Robbie go to Sir Guillaume's aid, but cannot do much for there are only two of them. Thomas uses his cunning by preying on small French parties and blowing up the gunpowder for French cannons. The two then rescue Sir Guillaume and travel back to La Roche-Derrien where he rediscovers Jeanette.

Jeanette convinces Thomas to retrieve her son and Thomas agrees. Thomas then leads a small raiding party to where little Charles is being held. However, he is betrayed and ends up in the Dominican's captivity. Thomas is questioned and tortured by the Dominicans. Eventually Thomas is let go and rehabilitated by his friends.

The King's Cupbearer Meanwhile, a large Breton/French army marches on La Roche-Derrien and lays siege to it hoping to lure the nearby English army out and defeat the only remaining army that is not in one of the garrisons. It works and after a long battle which results in English victory, de Taillebourg is slain by Thomas. The victory comes with a terrible cost to Thomas for his commander and friend, the crippled Sir William Skeat is murdered by Sir Geoffrey Carr. Carr is an enemy Thomas makes during his time in Durham, who is in turn killed by Thomas and Robbie.

Thomas decides to continue searching for the Grail and kill Guy Vexille on the way.

Year 1493 (MCDXCIII) was a common year starting on Tuesday of the Julian calendar.

Edward IV was King of England from 4 March 1461 to 3 October 1470, then again from 11 April 1471 until his death. He was a central figure in the Wars of the Roses, a series of civil wars in England fought between the Yorkist and Lancastrian factions between 1455 and 1487.

Sir Henry Percy, nicknamed Hotspur, was an English knight who fought in several campaigns against the Scots in the northern border and against the French during the Hundred Years' War. The nickname "Hotspur" was given to him by the Scots as a tribute to his speed in advance and readiness to attack. The heir to a leading noble family in northern England, Hotspur was one of the earliest and prime movers behind the deposition of King Richard II in favour of Henry Bolingbroke in 1399. He later fell out with the new regime and rebelled, being slain at the Battle of Shrewsbury in 1403 at the height of his career. 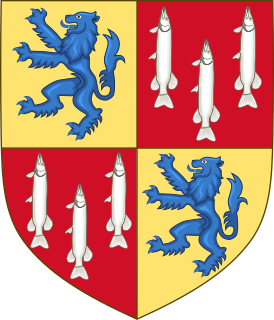 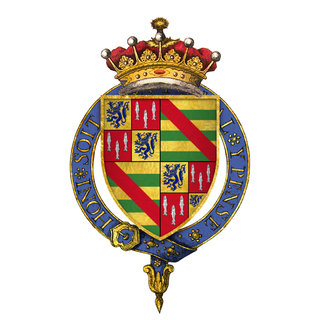 Humphrey (VIII) de Bohun, 6th Earl of Hereford, 5th Earl of Essex of Pleshy Castle in Essex, was hereditary Constable of England. He distinguished himself as a captain in the Breton campaigns of the Hundred Years' War, playing a part in winning the Battle of Morlaix (1342) and the Battle of La Roche-Derrien (1347). 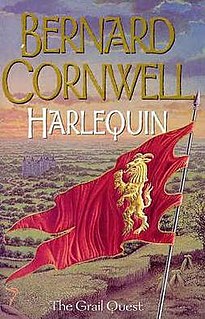 The Grail Quest is a historical fiction novel series written by Bernard Cornwell dealing with a 14th-century search for the Holy Grail, around the time of the Hundred Years' War. The stories follow the adventures of the fictional Thomas of Hookton as he leaves Dorset after the murder of his father and joins the English Army under Edward III as an archer. In Harlequin he is involved in battle in Brittany and subsequently at the Battle of Crécy. The archers are the first soldiers to be deployed along the crest of the hill at Crécy, providing cover before the battle starts for the knights building a system of ditches, pits and caltrops below to maim and bring down the enemy cavalry. The battle is a decisive victory for the English, even though they were outnumbered.

Harlequin is the first novel in The Grail Quest series by Bernard Cornwell, taking place in the mid-fourteenth century.

Margaret de Fiennes, was a French noblewoman who married an English marcher lord, Edmund Mortimer, of Wigmore, and was mother of Roger Mortimer, 1st Earl of March. 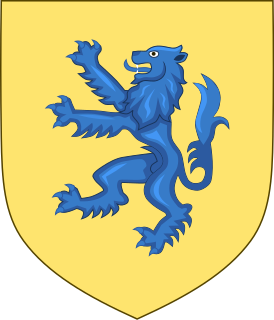 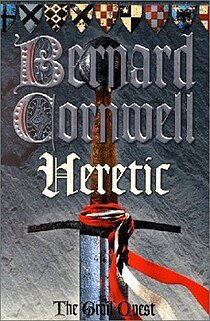 Heretic is the third novel in The Grail Quest series by Bernard Cornwell. Set during the first stage of the Hundred Years War, the novel follows Thomas of Hookton's quest to find the Holy Grail, a relic which may grant decisive victory to the possessor. 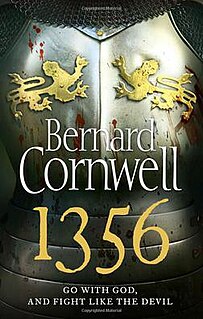 1356 is the fourth novel in The Grail Quest series by Bernard Cornwell. It is set in 1356, nearly a decade after the original trilogy, and culminates with the Battle of Poitiers. Intertwined in the plot is the quest to find La Malice, a fabled sword of Saint Peter and Christian relic which may turn the tide of the long war for France.