Valedictorian is an academic title of success used in the United States, Canada, Philippines, and Armenia, (and elsewhere in limited number of schools) for the student who delivers the closing or farewell statement at a graduation ceremony (called a valediction). The chosen valedictorian is traditionally the student with the highest ranking (highest Grade Point Average, or GPA) among their graduating class. [1] The term is an Anglicised derivation of the Latin vale dicere ("to say farewell"), historically rooted in the valedictorian's traditional role as the final speaker at the graduation ceremony before the students receive their diplomas. The valedictory address generally is considered a final farewell to classmates, before they disperse to pursue their individual paths after graduating.

In Australia, New Zealand, South Africa, Ireland and India the title valedictorian is not used frequently. In Australia, the title is sometimes awarded to a member of a graduating university class on the basis of contribution to the school rather than academic success. The highest-ranking student in a graduating class is often referred to as dux (Latin for "leader"), and may or may not give a speech. In France the term Major de promotion ("first in class") is used, although the term is not related to any ceremonial role, as there are rarely graduation ceremonies in schools or universities.

How an individual school confers the title is typically based upon the highest grade point average. Some institutions confer the title on the class member chosen to deliver the final graduation address, regardless of the speaker's academic credentials. Historically and traditionally, however, schools confer the title upon the highest ranking graduate of the class, who thereby earns the honor of delivering the valedictory address.

Some institutions award the title based upon various criteria such as overall academic record of grades and credits, a student's grade point average, the level of rigor within a student's academic program of studies, a vote by school administrators, the level of participation in and dedication to extracurricular activities, and one's public-speaking skills and abilities. In other schools, the position may be elected by the school body or appointed directly by the school administration based on various systems of merit. Some schools may feature "co-valedictorians" in lieu of conferring the title on a single individual from among the graduating class. This may occur in the case of a numerical tie in grade point averages, as part of a Latin honors system.

A valedictorian is usually given the gold medal during the graduation ceremony, with the salutatorian receiving a silver medal.

The awarding of the valedictorian honor may be the subject of heated controversy. Often the differences separating the top student from the nearest competitors are small, and sometimes there are accusations that the winner took advantage of the rules in a way that seemed unfair, such as taking easy courses to get additional credits. [2] Some schools have dropped the honor or changed the rules to allow multiple recipients. [3] [4] In turn, such changes have led to complaints that it is unfair to change the rules after a competition has begun. The New Jersey Commissioner of Education, for example, required schools to make changes to valedictorian award policy effective only for the incoming freshman class, not students already enrolled. [5] Another New Jersey case raised the question of whether accommodations for students under the Individuals with Disabilities Education Act and related laws should affect valedictorian honors. In Hornstine v. Township of Moorestown , a U.S. District Court judge blocked the Moorestown Superintendent of Schools from retroactively changing school policy to deny a disabled student sole honors. [5] While those who do well in school often find success in university and professional life, one study claimed to show that valedictorians were not any more likely to excel at a global scale than other students, with the argument being made that those with passions for subjects are more likely to excel, yet those same students tend to find it more difficult to work hard at subjects that they are not interested in. [6]

The valedictory address, or valediction, is the closing or farewell statement delivered at a graduation ceremony. It is an oration at commencement (in Canada, called convocation in university and graduation in high school) exercises in U.S. and some Canadian high schools, colleges, and universities delivered by one of the graduates. The mode of discourse generally is inspirational and persuasive. The various aims of this address are to inspire the graduates and to thank individuals responsible for their successes while reflecting on youthful frivolity and the accomplishments of the class. Above all, however, the primary aim of the valedictory address is to allow a representative of the graduating class to bid a final farewell to the students and to the school, as the graduates prepare to disperse and to begin the next phase of their lives. 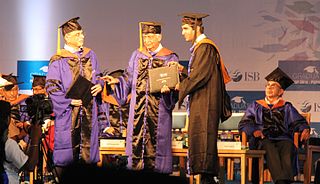 Graduation is the award of a diploma or academic degree, or the ceremony that is sometimes associated with it, in which students become graduates. The date of graduation is often called graduation day.

Latin honors are Latin phrases used in some colleges and universities to indicate the level of distinction with which an academic degree has been earned. This system is primarily used in the United States and Canada. It is also used in some Southeastern Asian countries with European colonial history, such as Indonesia and the Philippines, although sometimes translations of these phrases are used instead of the Latin originals. The honors distinction should not be confused with the honors degrees offered in some countries, or with honorary degrees.

Salutatorian is an academic title given in the United States, Armenia, and the Philippines to the second-highest-ranked graduate of the entire graduating class of a specific discipline. Only the valedictorian is ranked higher. This honor is traditionally based on grade point average (GPA) and number of credits taken, but consideration may also be given to other factors such as co-curricular and extracurricular activities. The title comes from the salutatorian's traditional role as the first speaker at a graduation ceremony, delivering the salutation. In a high school setting, a salutatorian may also be asked to speak about the current graduating class or to deliver an invocation or benediction. In some instances, the salutatorian may even deliver an introduction for the valedictorian. The general themes of a salutatorian speech and valediction are usually of growth, outlook towards the future, and thankfulness.

Dux is Latin for "leader" and later for duke and its variant forms.

Encaenia is an academic or sometimes ecclesiastical ceremony, usually performed at colleges or universities. It generally occurs some time near the annual ceremony for the general conferral of degrees to students. The word is from Latin, meaning dedication or consecration, and is ultimately derived from the Greek εγκαίνια (egkainia), meaning a festival of renewal or dedication, and corresponds to the English term commencement.

A Dean's List is an academic award, or distinction, used to recognize the level of highest scholarship demonstrated by students in a college or university. This system is most often used in North America, though institutions in Europe, Asia, and Australia may also employ similar measures. It is often synonymous with honor roll and honor list, but should not be confused with honours degrees.

Hornstine v. Moorestown, 263 F. Supp. 2d 887, was a 2003 case in the United States District Court for the District of New Jersey that considered whether grades received by a student with a disability for classes where accommodations had been made under an Individualized Education Program could be discounted in awarding valedictorian honors. Blair Hornstine, then in her final year at Moorestown High School, sued the Moorestown Township Public Schools Board of Education to stop them "from retroactively applying to her a proposed policy amendment that would allow the designation of multiple valedictorians". Under the then existing school policy, Hornstine would have been the sole recipient of the honor.

Flintridge Preparatory School, familiarly known as Flintridge Prep or simply Prep, is a coeducational day school for grades 7-12. Founded in 1933, it is located in La Cañada Flintridge, California.

Business Careers High School is a business and technology magnet high school part of the Northside Independent School District in San Antonio, Texas. It is a "school within a school" located on the campus of Oliver Wendell Holmes High School. The school attracts students who want to study business and other related fields. The school allows the students to grasp the concepts of the business world easier by offering laptops to each student to use for a school purposes.

William Nottingham High School is a public high school located at 3100 East Genesee Street in Syracuse, New York. Part of the Syracuse City School District, the high school has an enrollment of about 1350 students in grades 9–12.

A baccalaureate service is a celebration that honors a graduating senior class from a college or high school or eighth grade. The event is typically a Christianity-based interdenominational service, though it may also be of a strictly Catholic nature.

Class rank is a measure of how a student's performance compares to other students in their class. It is commonly also expressed as a percentile. For instance, a student may have a GPA better than 750 of their classmates in a graduating class of 800.

The American School Foundation of Monterrey is a private, nonprofit, international school located in Monterrey, Mexico, which provides a U.S.-type education to international and Mexican students. It is one of a few American-style educational centers in this city and is notable for being the oldest one of that group.

Granville Junior/Senior High School, colloquially referred to as Granville High School, is a public secondary school located in the village of Granville, New York. Situated in Washington County and to the northeast of New York State's Capital District, it is part of the Granville Central School District. The school serves the district's 7th through 12th grade student population. About 10% of the building's students are drawn from neighboring communities in the state of Vermont.

Tahanto Regional Middle/High School is a public middle school and high school located in Boylston, Massachusetts, United States. In the 2012 rankings of U.S. News & World Report Best High Schools, it ranked as number 45 within Massachusetts. The school serves grades 6–12 with a student to teacher ratio of 12:1.

Caverna High School is a small public high school located in Horse Cave, Kentucky. Built in 1950, the school is operated by the Caverna Independent Schools, one of only two school districts in Kentucky that are known to operate across county lines. In 1950, Horse Cave, located in Hart County; Cave City, in Barren County; and the Kentucky Board of Education held a meeting that approved the union of the two districts because of the low student numbers in both school systems. The actual construction of the new school did not start until 1951. Originally the school was going to be named, "Caberma." However, it was decided to stay with the name "Caverna."