This was led by Colonel Thomas Price in the Second Boer War.

The Regiment came into controversy after an attack on their camp at Wilmansrust. The 5th saw heavy casualties with the Regimental surgeon, and 18 NCOs and men killed; five officers and 36 NCOs and men were wounded. The Officer in Charge of the column, Major-General Sir Stuart Brownlow Beatson, K.C.B., K.C.S.I., K.C.V.O. (1854–1914), was not satisfied with the actions of the Victorian Mounted Rifles and was quoted as saying: "I tell you what I think. The Australians are a damned fat, round shouldered, useless crowd of wasters . . . In my opinion they are a lot of white-livered curs . . . You can add dogs too." [1] [2] He charged three men—Troopers James Steele (1142), Arthur Richards (1272) and Herbert Henry Parry (1335). [3] —of the VMR for inciting mutiny [4] and after a summary Court Martial, he sentenced them to death. [5] This sentence was commuted by General Kitchener who was in charge of all allied forces. The reduced sentences were debated in both the Australian and British Parliaments and were eventually commuted. [1]

When the 5th VMR departed from South Africa, Lord Kitchener sent the CO this telegram:

"11 March 1902, Cape Town, Please Convey to your Australians my warm appreciation of their gallant and arduous service in this country. In the name of the Army in South Africa, I wish them good luck and God speed." [1]

Lieutenant Colonel Leslie Cecil Maygar, was an Australian recipient of the Victoria Cross, the highest award for gallantry in the face of the enemy that can be awarded to British and Commonwealth forces. He was awarded the VC for facilitating the rescue of a dismounted man while under severe rifle fire in 1902 during the Second Boer War. He later served at Gallipoli during the First World War, and died of wounds after being strafed during the Battle of Beersheba as part of the Sinai and Palestine campaign.

William Thomas Dartnell, VC, also known as Wilbur Taylor Dartnell, was an Australian-born soldier, actor and a recipient of the Victoria Cross, the highest award for gallantry in the face of the enemy that can be awarded to British and Commonwealth forces. Born in Melbourne, he served in the Second Boer War as a teenager and later in the Bambatha Rebellion of 1906. He married, managed his own business and worked as a professional actor before immigrating to South Africa in 1912 or 1913.

The Imperial Yeomanry was a volunteer mounted force of the British Army that mainly saw action during the Second Boer War. Created on 2 January 1900, the force was initially recruited from the middle classes and traditional yeomanry sources, but subsequent contingents were more significantly working class in their composition. The existing yeomanry regiments contributed only a small proportion of the total Imperial Yeomanry establishment. In Ireland 120 men were recruited in February 1900. It was officially disbanded in 1908, with individual Yeomanry regiments incorporated into the new Territorial Force.

Thomas Caradoc Rose Price CB, often known as Colonel Tom Price, was an Australian soldier, and acting commandant of the Commonwealth Military Forces in Victoria in 1902. Joining the British Indian Army in his early years, he served 20 years in India before returning to Australia. In 1885, he raised the Victorian Mounted Rifles, and was instrumental in establishing the concept of light horse units within the Australian Army. In 1900, he led a Victorian contingent during the Second Boer War, and was the only Australian officer during that war to command a force of British regulars. He remained in the Australian military after the war, serving in Queensland until 1904 when he was medically discharged. He retired to Victoria again and died in 1911 at the age of 68. 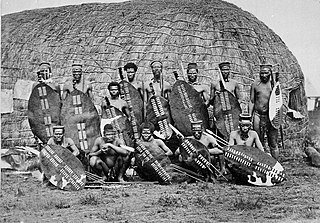 The Natal Native Contingent was a large force of auxiliary soldiers in British South Africa, forming a substantial portion of the defence forces of the British colony of Natal. The Contingent saw action during the 1879 Anglo-Zulu War. The Natal Mounted Police was created in 1873 to bolster the defenses of Natal. It enlisted European officers, NCOs and natives. The infantry was created in 1878. Most enlisted troops were drawn from the Basuto and Mpondo tribes, which had had long experience fighting the Zulus.

Colonel William Thomas Reay CBE VD was an Australian journalist, newspaper editor, and politician, as well as a police and army officer. 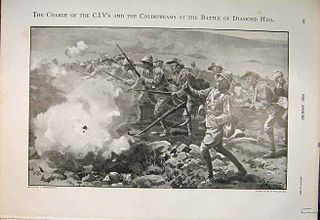 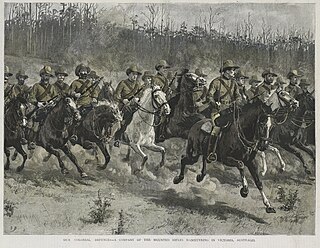 Until Australia became a Federation in 1901, each of the six colonies were responsible for their own defence. From 1788 until 1870 this was done with British regular forces. In all, 24 British infantry regiments served in the Australian colonies. Each of the Australian colonies gained responsible government between 1855 and 1890, and while the Colonial Office in London retained control of some affairs, and the colonies were still firmly within the British Empire, the Governors of the Australian colonies were required to raise their own colonial militia. To do this, the colonial Governors had the authority from the British crown to raise military and naval forces. Initially these were militias in support of British regulars, but British military support for the colonies ended in 1870, and the colonies assumed their own defence. The separate colonies maintained control over their respective militia forces and navies until 1 March 1901, when the colonial forces were all amalgamated into the Commonwealth Forces following the creation of the Commonwealth of Australia. Colonial forces, including home raised units, saw action in many of the conflicts of the British Empire during the 19th century. Members from British regiments stationed in Australia saw action in India, Afghanistan, the New Zealand Wars, the Sudan conflict, and the Boer War in South Africa. 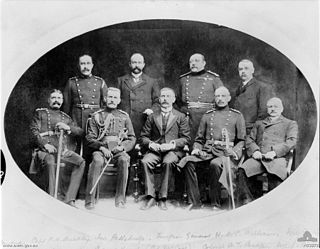 Stanley Spencer Reid was an Australian rules footballer with the Fitzroy Football Club from 1894 to 1898.

Major General Sir Julius Henry Bruche was an Australian Army officer who undertook active service during the Second Boer War and First World War and eventually rose to the position of Chief of the General Staff (CGS) in 1931. He retired in 1935 and died in 1961, aged 88.

The military history of Australia during the Boer War is complex, and includes a period of history in which the six formerly autonomous British Australian colonies federated to become the Commonwealth of Australia. At the outbreak of the Second Boer War, each of these separate colonies maintained their own, independent military forces, but by the cessation of hostilities, these six armies had come under a centralised command to form the Australian Army. 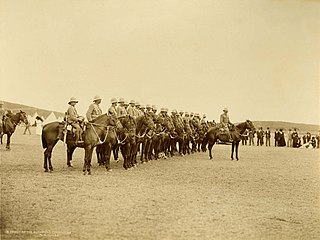 The 8th/13th Victorian Mounted Rifles was an armoured regiment of the Australian Army Reserve. Formed in 1948, the regiment initially operated M3 Grant medium tanks, but was later re-equipped with Centurion tanks in the late 1950s. Operating out of several depots across northern Victoria and southern New South Wales, throughout the 1950s, 60s and 70s the regiment undertook both an armoured and reconnaissance role operating both tanks and armoured cars before being re-equipped with M113A1 armored personnel carriers in the early 1970s. In 1976, the regiment was reduced to a squadron sized element. It was eventually merged with the 4th/19th Prince of Wales's Light Horse in 1992.

The Australian Regiment was a regiment of troops from the Australian colonies that served in the Second Boer War. It began its existence as infantry but was soon mounted due to the conditions of the war.

Lieutenant John Edgar Burch was an officer of the Canadian Militia. Serving with the 1st Canadian Mounted Rifles during the Boer War, he was killed in action at the Battle of Witpoort alongside Lieutenant Harold Lothrop Borden while leading a counter-attack on the Boer positions.