Last updated May 26, 2022
College athlete who is not recruited
Not to be confused with walkover.

A walk-on, in American and Canadian college athletics, is an athlete who becomes part of a team without being recruited and awarded an athletic scholarship. A team's walk-on players are normally the weakest players and relegated to the scout team, and may not even be placed on the official depth chart or traveling team, while the scholarship players are the team's main players. However, a walk-on player occasionally becomes a noted member of the team.

The reasons athletes choose to pursue the path of a walk-on include:

Many schools that do not provide athletic scholarships still recruit student athletes, and these students can get admitted to a school with academic records that are below average for that school. The Ivy League, for example, does not permit athletic scholarships, but each school has a limited number of athletes it can recruit for each sport. Additionally, all prospective athletes are required to meet a minimum score on what the league calls the Academic Index (AI), a metric based largely on high school grade-point averages and SAT or ACT scores. The goal of the AI is to ensure that students who receive athletic admissions slots fall within one standard deviation of the credentials of the student body as a whole. [6]

College baseball is baseball that is played on the intercollegiate level at institutions of higher education. In comparison to football and basketball, college competition in the United States plays a smaller role in developing professional players, as baseball's professional minor leagues are more extensive, with a greater history of supplying players to MLB. Moving directly from high school to the professional level is more common in baseball than in football or basketball. However, if players do opt to enroll at a four-year college to play baseball, they must complete three years to regain professional eligibility, unless they reach age 21 before starting their third year of college. Players who enroll at junior colleges regain eligibility after one year at that level. In the 2020 season, which was abbreviated due to the COVID-19 pandemic, there were 300 NCAA Division I teams in the United States. 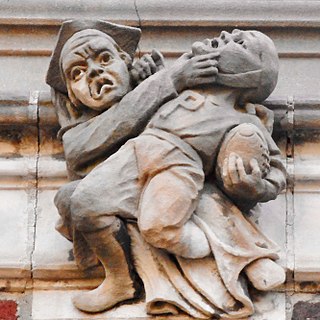 An athletic scholarship is a form of scholarship to attend a college or university or a private high school awarded to an individual based predominantly on his or her ability to play in a sport. Athletic scholarships are common in the United States, but in a majority of countries they are rare or non-existent.

The Academic Progress Rate (APR) is a measure introduced by the National Collegiate Athletic Association (NCAA), the nonprofit association that organizes the athletic programs of many colleges and universities in the United States and Canada, to track student-athletes chances of graduation. The Academic Progress Rate (APR) is a term-by-term measure of eligibility and retention for Division I student-athletes that was developed as an early indicator of eventual graduation rates.

Redshirt, in United States college athletics, is a delay or suspension of an athlete's participation in order to lengthen their period of eligibility. Typically, a student's athletic eligibility in a given sport is four seasons, aligning with the four years of academic classes typically required to earn a bachelor's degree at an American college or university. However, in a redshirt year, student athletes may attend classes at the college or university, practice with an athletic team, and "suit up" for play – but they may compete in only a limited number of games. Using this mechanism, a student athlete has at most five academic years to use the four years of eligibility, thus becoming what is termed a fifth-year senior. 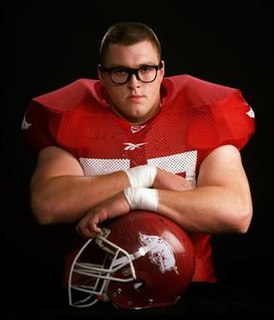 Brandon Vaughn Burlsworth was an offensive lineman for the Arkansas Razorbacks football team from 1995 to 1998. He joined the team as a walk-on and eventually became an All-American. 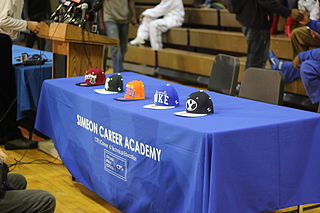 In college athletics in the United States, recruiting is the process in which college coaches add prospective student athletes to their roster each off-season. This process typically culminates in a coach extending an athletic scholarship offer to a player who is about to be a junior in high school or higher. There are instances, mostly at lower division universities, where no athletic scholarship can be awarded and where the player pays for tuition, housing, and textbook costs out of pocket or from financial aid. During this recruiting process, schools must comply with rules that define who may be involved in the recruiting process, when recruiting may occur and the conditions under which recruiting may be conducted. Recruiting rules seek, as much as possible, to control intrusions into the lives of prospective student-athletes. The NCAA defines recruiting as “any solicitation of prospective student-athletes or their parents by an institutional staff member or by a representative of the institution’s athletics interests for the purpose of securing a prospective student-athlete’s enrollment and ultimate participation in the institution’s intercollegiate athletics program."

The NCAA Division I Football Bowl Subdivision (FBS), formerly known as Division I-A, is the highest level of college football in the United States. The FBS consists of the largest schools in the National Collegiate Athletic Association (NCAA). As of 2020, there are 10 conferences and 130 schools in FBS.

Student athlete is a term used principally in the United States to describe students enrolled at educational institutions, principally colleges and universities, but including secondary schools, who participate in an organized competitive sport sponsored by that educational institution. The term student-athlete was coined in 1964 by Walter Byers, the first executive director of the Nationall Collegiate Athletic Association (NCAA).

NCAA student-athlete recruiting adheres to a strict process set forth by the NCAA, which includes timetables, regulations, and consequences for violations.

Oversigning is an unofficial term for the practice of American college athletic departments signing prospective student-athletes to a National Letter of Intent (NLI) that may exceed the maximum number of athletic scholarships permitted by the National Collegiate Athletic Association (NCAA). The NCAA limits the total number of scholarships that may be awarded in all of its sponsored sports, and in football also limits the number of scholarships awarded in a given year. Those limits differ by sport and the division in which that school participates. Most conferences have additional rules governing signing NLI.

Sean Boudreau Bedford is a former American football center for the Georgia Tech Yellow Jackets. Bedford played one season as the starting center for Rivas Osos, a Spanish football team in the Liga Nacional de Fútbol Americano from 2010-2011. A walk on in college, he went on to win the very first Burlsworth Trophy. 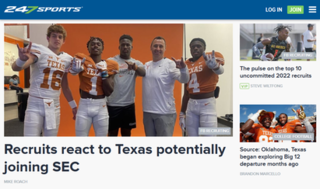 247Sports is an American network of websites that focus mainly on athletic recruitment in college football and basketball. It is owned and operated by Paramount.

Matthew Harrison Stainbrook is an American basketball player for TAU Castelló of the LEB Oro. He played college basketball for the Xavier Musketeers and Western Michigan Broncos. During his two seasons of play at Xavier, Stainbrook was one of Xavier's leading scorers and rebounders.

The definition of amateurism within the context of collegiate sports has evolved since it was first pronounced by the NCAA upon its inception in 1906. In its early stages, changes in the NCAA's core beliefs in what a student-athlete should be rewarded and allowed to accept financially for their athletic talents had its effects on the definition of amateurism. Over the course of the 20th and early 21st century, regulatory changes, court claims, and the beliefs of NCAA authority about student-athlete compensation further developed what an amateur collegiate athlete is entitled to receive. This evolution is what impacted the evolving logistics of the NCAA Bylaw 12, which explains the current definition of amateurism and what it grants or restricts a collegiate athlete to be able to receive as compensation for their participation. These guidelines have been described to both benefit and unjustifiably limit the student-athlete and the success of institutions’ athletic performance. This debate has been a strong driver in court claims against the NCAA and the mainstream controversy about what student-athletes should have the right to receive financially. 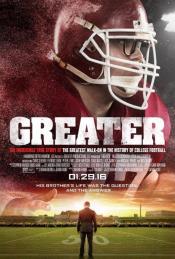 Greater is a 2016 American biographical sports film directed by David Hunt and starring Christopher Severio as American football player Brandon Burlsworth, a walk-on college player who became an All-American, dying in a car crash 11 days after being drafted high in the 3rd round to the National Football League. The film was released on August 26, 2016.

The 2017 Ole Miss Rebels football team represented the University of Mississippi in the 2017 NCAA Division I FBS football season. The Rebels played their home games at Vaught–Hemingway Stadium in Oxford, Mississippi and competed in the Western Division of the Southeastern Conference (SEC). They were led by then-interim head coach Matt Luke. They finished the season 6–6, 3–5 in SEC play to finish in sixth place in the Western Division.