The first Western Mail was published on 19 December 1885 [1] by Charles Harper and John Winthrop Hackett, co-owners of The West Australian , the state's major daily paper. It was printed by James Gibney at the paper's office in St Georges Terrace.

In 1901, in the publication Twentieth century impressions of Western Australia, a history of the early days of the West Australian and the Western Mail was published. [2]

In the 1920s The West Australian employed its first permanent photographer Fred Flood, many of whose photographs were featured in the Western Mail. [3]

The Western Mail was primarily created to provide farmers with up to date information. However, for many women in the most isolated areas of the state it represented their only social connections beyond their families. The women's and children's sections became popular and often attracted the most revenue for the paper. [8]

West Australian Newspapers management experimented with a variety of formats in the late 1940s and early 1950s, including the Weekend Mail for five years (see publication details below).

However, the name Western Mail was recycled for a last Christmas Annual in 1956.

In 1980 the name was resurrected for a new weekly, published by Western Mail Limited. The push for a new paper was made by Robert Holmes à Court and Bell Group following his failed takeover attempt of The Times (UK).

Most dates are derived from the entries in the State Library's reference catalogue:

The West Perth Football Club, nicknamed the Falcons, is an Australian rules football club located in Joondalup, Western Australia. West Perth competes in the West Australian Football League (WAFL) and is the oldest existing Australian rules football club in Western Australia. Originally located at Leederville Oval, the team was relocated in 1994 to Arena Joondalup, a sports complex in the northern suburbs of Perth. The team's club song is "It's a Grand Old Flag" and its traditional rivals are East Perth.

George Ronald Doig was an Australian rules footballer who played for and later coached the East Fremantle Football Club in the Western Australian National Football League (WANFL). A member of the Doig sporting family, Doig kicked 1095 goals from his 202 games playing almost exclusively as a forward, becoming East Fremantle's leading goalkicker of all-time, and leading the WANFL's goalkicking on six occasions. He kicked more than 100 goals in a season nine times, which included a haul of 152 goals in 1934 that set an elite record which was not broken until Bernie Naylor kicked 167 goals in 1953. Doig captained the club for two seasons, from 1940 to 1941, also filling the role of coach during the first season.

Ronald Douglas "Ron" Tucker was an Australian rules footballer who played for Perth and Subiaco in the Western Australian National Football League (WANFL). Playing in a number of positions, though primarily at centre half-forward, Tucker kicked a total of 803 goals in 215 WANFL games between 1940 and 1955, and 32 goals in 14 games for Western Australia in interstate matches. Tucker was named in Perth's Team of the Century in 1998, and was inducted into the West Australian Football Hall of Fame in 2009.

Percival Leitch Hussey was an Australian sportsman. He played first-class cricket for Western Australia, football for the Rovers Football Club in the West Australian Football Association (WAFA), and was also a noted runner.

The Fly by Night Musicians Club, in Fremantle, Western Australia, was established in 1986 as a not-for-profit organisation by musicians and music lovers, providing live entertainment by local artists, and a modest venue for visiting national and international performers. It was previously housed in a heritage-listed building owned by the National Trust of Australia (W.A.), fronting Holdsworth Street and Parry Street—a prefabricated former Defence Department building, originally constructed as an artillery drill hall. It is now housed at Victoria Hall, a former parish hall designed by Talbot Hobbs and named in celebration of the diamond jubilee of Queen Victoria in 1897. 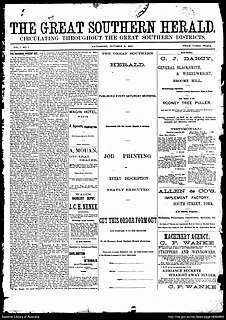 Frederick William Flood (1881–1965) was an English born Australian photographer who worked for The West Australian newspaper in Perth Western Australia between the 1920s and 1940s.

Robbs Jetty Abattoir was an operation that was part of the Western Australia government meat export industry between 1921 and 1994. It was located in South Fremantle and it utilised the transport services provided by the Robbs Jetty railway station. It was known variously as Robb Jetty, Robbs Jetty and Robb's Jetty. The abattoir grew out of a complex of private meatworks established in the late 19th century, including Forrest, Emanuel & Company and Connor, Doherty & Durack. In 1921 the Fremantle Freezing Works began operation as one of the three State Government regulated abattoirs under the 1909 Abattoir Act.