z/OS is a 64-bit operating system for IBM z/Architecture mainframes, introduced by IBM in October 2000. [2] It derives from and is the successor to OS/390, which in turn followed a string of MVS versions. [NB 1] Like OS/390, z/OS combines a number of formerly separate, related products, some of which are still optional. z/OS has the attributes of modern operating systems, but also retains much of the older functionality originated since the 1960s and still in regular use—z/OS is designed for backward compatibility.

z/OS supports stable mainframe systems and standards such as CICS, COBOL, IMS, PL/I, DB2, RACF, SNA, IBM MQ, record-oriented data access methods, REXX, CLIST, SMP/E, JCL, TSO/E, and ISPF, among others. However, z/OS also supports 64-bit Java, C, C++, and UNIX (Single UNIX Specification) APIs and applications through UNIX System Services  – The Open Group certifies z/OS as a compliant UNIX operating system – with UNIX/Linux-style hierarchical HFS [NB 2] and zFS file systems. These compatibilities make z/OS support a range of commercial and open source software. [3] z/OS can communicate directly via TCP/IP, including IPv6, [4] and includes standard HTTP servers (one from Lotus, the other Apache-derived) along with other common services such as FTP, NFS, and CIFS/SMB. z/OS is designed for high quality of service (QoS), even within a single operating system instance, and has built-in support for Parallel Sysplex clustering.

z/OS has a Workload Manager (WLM) and dispatcher which automatically manages numerous concurrently hosted units of work running in separate key-protected address spaces according to dynamically adjustable goals. This capability inherently supports multi-tenancy within a single operating system image. However, modern IBM mainframes also offer two additional levels of virtualization: LPARs and (optionally) z/VM. These new functions within the hardware, z/OS, and z/VM – and Linux and OpenSolaris support – have encouraged development of new applications for mainframes. Many of them utilize the WebSphere Application Server for z/OS middleware.

From its inception z/OS has supported tri-modal addressing (24-bit, 31-bit, and 64-bit). Up through Version 1.5, z/OS itself could start in either 31-bit ESA/390 or 64-bit z/Architecture mode, so it could function on older hardware, albeit without 64-bit application support on those machines. (Only the newer z/Architecture hardware manufactured starting in the year 2000 can run 64-bit code.) IBM support for z/OS 1.5 ended on March 31, 2007. Now z/OS is only supported on z/Architecture mainframes and only runs in 64-bit mode. Application programmers can still use any addressing mode: all applications, regardless of their addressing mode(s), can coexist without modification, and IBM maintains commitment to tri-modal backward compatibility. However, increasing numbers of middleware products and applications, such as DB2 Version 8 and above, now require and exploit 64-bit addressing.

z/OS introduced Variable Workload License Charges (VWLC) and Entry Workload License Charges (EWLC) which are sub-capacity billing options. VWLC and EWLC customers only pay for peak monthly z/OS usage, not for full machine capacity as with the previous OS/390 operating system. VWLC and EWLC are also available for most IBM software products running on z/OS, and their peaks are separately calculated but can never exceed the z/OS peak. To be eligible for sub-capacity licensing, a z/OS customer must be running in 64-bit mode (which requires z/Architecture hardware), must have completely eliminated OS/390 from the system, and must e-mail IBM monthly sub-capacity reports. Sub-capacity billing substantially reduces software charges for most IBM mainframe customers. [7] Advanced Workload License Charges (AWLC) is the successor to VWLC on mainframe models starting with the zEnterprise 196, and EAWLC is an option on zEnterprise 114 models. AWLC and EAWLC offer further sub-capacity discounts.

Within each address space, z/OS typically permits the placement of only data, not code, above the 2 GB "bar". z/OS enforces this distinction primarily for performance reasons. There are no architectural impediments to allowing more than 2 GB of application code per address space. IBM has started to allow Java code running on z/OS to execute above the 2 GB bar, again for performance reasons.

Starting with z/OS version 2 release 3, code may be placed and executed above the 2 GB "bar". However, very few z/OS services may be invoked from above the "bar".

Memory is obtained as "Large Memory Objects" in multiples of 1 MB (with the expectation that applications and middleware will manage memory allocation within these large pieces). There are three types of large memory objects:

With zERT, the TCP/IP stack acts as a focal point in collecting and reporting the cryptographic security attributes of IPv4 and IPv6 application traffic that is protected using the TLS/SSL, SSH and IPSec cryptographic network security protocols. The collected connection level data is written to SMF in new SMF 119 subtype 11 records for analysis. [9]

In certain environments, the volume of SMF 119 subtype 11 records can be large. The zERT aggregation function provides an alternative SMF view of the collected security session data. This alternate view is written in the form of new SMF 119 subtype 12 records that summarize the use of security sessions by many application connections over time and which are written at the end of each SMF interval. This alternate view condenses the volume of SMF record data while still providing all the critical security information.

The z/OS Generation Data Group (GDG) is a description of how many generations of a file are to be kept and at what age a generation will be deleted. Whenever a new generation is created, the system checks whether one or more obsolete generations are to be deleted.

The purpose of GDGs is to automate archival, using the command language JCL, the file name given is generic. When DSN appears, the GDG name appears along with the history number, where

(0) is the most recent version

Another use of GDGs is to be able to address all generations simultaneously within a JCL script without having to know the number of currently available generations. To do this, you have to omit the parentheses and the generation number in the JCL when specifying the dataset.

Creation of a standard GDG for five safety scopes, each at least 35 days old:

Operational data is data that z/OS system produces when it runs. This data indicates the health of the system and can be used to identify sources of performance and availability issues in the system. IBM Z Common Data Provider collects IT operational data from z/OS systems, transforms it to a consumable format, and streams it to analytics platforms. [10]

IBM mainframes are large computer systems produced by IBM since 1952. During the 1960s and 1970s, IBM dominated the large computer market. Current mainframe computers in IBM's line of business computers are developments of the basic design of the IBM System/360.

Multiple Virtual Storage, more commonly called MVS, was the most commonly used operating system on the System/370 and System/390 IBM mainframe computers. IBM developed MVS, along with OS/VS1 and SVS, as a successor to OS/360. It is unrelated to IBM's other mainframe operating system lines, e.g., VSE, VM, TPF.

z/VSE is an operating system for IBM mainframe computers, the latest one in the DOS/360 lineage, which originated in 1965. Announced Feb. 1, 2005 by IBM as successor to VSE/ESA 2.7, then-new z/VSEwas named to reflect the new "System z" branding for IBM's mainframe product line.

Hercules is a computer emulator allowing software written for IBM mainframe computers and for plug compatible mainframes to run on other types of computer hardware, notably on low-cost personal computers. Development started in 1999 by Roger Bowler, a mainframe systems programmer.

The IBM System/370 (S/370) is a model range of IBM mainframe computers announced on June 30, 1970 as the successors to the System/360 family. The series mostly maintains backward compatibility with the S/360, allowing an easy migration path for customers; this, plus improved performance, were the dominant themes of the product announcement. In September 1990, the System/370 line was replaced with the System/390.

Job Control Language (JCL) is a name for scripting languages used on IBM mainframe operating systems to instruct the system on how to run a batch job or start a subsystem.

z/OS UNIX System Services is a required, included component of z/OS. z/OS UNIX is a certified UNIX operating system implementation optimized for mainframe architecture. It is the first UNIX 95 to not be derived from the AT&T source code. Through integration with the rest of z/OS, additional Time Sharing Option (TSO) commands are available alongside the usual UNIX services, making it possible to process UNIX files using ISPF. Extensions in JCL make it possible to use these files in batch processing.

In the context of IBM mainframe computers in the S/360 line, a data set or dataset is a computer file having a record organization. Use of this term began with, e.g., DOS/360, OS/360, and is still used by their successors, including the current z/OS. Documentation for these systems historically preferred this term rather than file.

IBM System z9 is a line of IBM mainframe computers. The first models were available on September 16, 2005. The System z9 also marks the end of the previously used eServer zSeries naming convention. It was also the last mainframe computer that NASA ever used.

Teleprocessing Network Simulator (TPNS) is an IBM licensed program, first released in 1976 as a test automation tool to simulate one or many network terminal(s) to a mainframe computer system, for functional testing, regression testing, system testing, capacity management, benchmarking and stress testing. In 2002, IBM re-packaged TPNS and released Workload Simulator for z/OS and S/390 (WSim) as a successor product.

OS/360, officially known as IBM System/360 Operating System, is a discontinued batch processing operating system developed by IBM for their then-new System/360 mainframe computer, announced in 1964; it was influenced by the earlier IBSYS/IBJOB and Input/Output Control System (IOCS) packages for the IBM 7090/7094 and even more so by the PR155 Operating System for the IBM 1410/7010 processors. It was one of the earliest operating systems to require the computer hardware to include at least one direct access storage device. 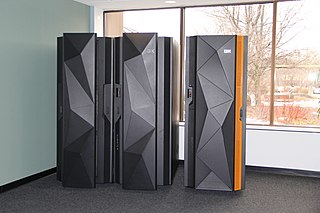 Linux on IBM Z is the collective term for the Linux operating system compiled to run on IBM mainframes, especially IBM Z and IBM LinuxONE servers. Similar terms which imply the same meaning are Linux on zEnterprise, Linux on zSeries, Linux/390, Linux/390x, etc.

The IBM System/390 is the discontinued fifth generation of the System/360 instruction set architecture. The first ESA/390 computer was the Enterprise System/9000 (ES/9000) family, which were introduced in 1990. These were followed by the 9672 CMOS System/390 mainframe family in the mid-1990s. These systems followed the IBM 3090, with over a decade of follow-ons. The ESA/390 was succeeded by the 64-bit z/Architecture in 2000.