Zura Begum, also known as Aye Nyunt, was one of the first two female legislators of the Union of Burma, along with Khin Kyi. She was a politician from Arakan, Burma (now Rakhine State, Myanmar). She was elected to the Parliament of Burma during the 1951 Burmese general election, as the representative of Maungdaw-2 constituency. [1] [2]

A legislator is a person who writes and passes laws, especially someone who is a member of a legislature. Legislators are usually politicians and are often elected by the people of the state. Legislatures may be supra-national, national, regional, or local. 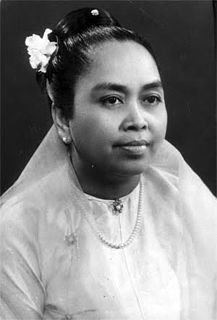 Maha Thiri Thudhamma Khin Kyi (1912–1988) was a Burmese politician and diplomat, best known for her marriage to the country's leader, Aung San, with whom she had four children, including Aung San Suu Kyi.

Rakhine State is a state in Myanmar (Burma). Situated on the western coast, it is bordered by Chin State to the north, Magway Region, Bago Region and Ayeyarwady Region to the east, the Bay of Bengal to the west, and the Chittagong Division of Bangladesh to the northwest. It is located approximately between latitudes 17°30' north and 21°30' north and longitudes 92°10' east and 94°50' east. The Arakan Mountains, rising to 3,063 metres (10,049 ft) at Victoria Peak, separate Rakhine State from central Burma. Off the coast of Rakhine State there are some fairly large islands such as Cheduba and Myingun Island. Rakhine State has an area of 36,762 square kilometres (14,194 sq mi) and its capital is Sittwe. 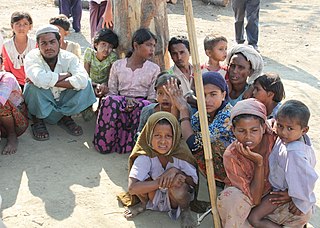 The Rohingya people are a stateless Indo-Aryan ethnic group who reside in Rakhine State, Myanmar. There were an estimated 1 million Rohingya living in Myanmar before the 2016–17 crisis. By December 2017, an estimated 625,000 refugees from Rakhine, Myanmar, had crossed the border into Bangladesh since August 2017. The majority are Muslim while a minority are Hindu. Described by the United Nations in 2013 as one of the most persecuted minorities in the world, the Rohingya population is denied citizenship under the 1982 Myanmar nationality law. According to Human Rights Watch, the 1982 laws "effectively deny to the Rohingya the possibility of acquiring a nationality". Although Rohingya history in the region can be traced back to the 8th century, Myanmar law does not recognize the ethnic minority as one of the eight "national indigenous races". They are also restricted from freedom of movement, state education and civil service jobs. The legal conditions faced by the Rohingya in Myanmar have been widely compared to apartheid by many international academics, analysts and political figures, including Nobel laureate Bishop Desmond Tutu, a South African anti-apartheid activist. 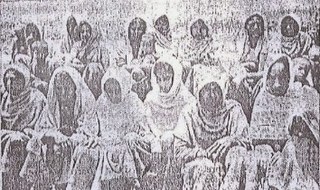 Operation Dragon King, known officially as Operation Nagamin and sometimes translated as the King Dragon operation, was a military operation carried out by the Tatmadaw and immigration officials in northern Arakan, Burma, during the socialist rule of Ne Win.

During World War II, Japanese forces invaded Burma, that was then under British colonial rule. The British forces retreated and in the power vacuum left behind, considerable inter communal violence erupted between Pro-Japanese Buddhist Rakhine and Pro-British Muslim villagers. As part of the 'stay-behind' strategy to impede the Japanese advance, the Commander-in-Chief of forces in Delhi, Wavell, established "V-Force" which armed Rohingya locals in northern Arakan to create a buffer zone from Japanese invasion when they retreated.

Myanmar (Burma) is a multi-religious country. There is no official state religion, but the government shows preference for Theravada Buddhism, the majority religion of the nation. According to both the 2014 census of the Burmese government Buddhism is the dominant religion, of 88% of the population, practiced especially by the Bamar, Rakhine, Shan, Mon, Karen people and Chinese ethnic groups. Bamar people also practice the Burmese folk religion under the name of Buddhism. The new constitution provides for the freedom of religion; however, it also grants broad exceptions that allow the regime to restrict these rights at will. Ethnic minorities practice Christianity, Islam, and Hinduism.

Rohingya people in Pakistan are a community based in Karachi, Sindh, Pakistan. They are Rohingya Muslims from Rakhine State, Myanmar, who have fled their homeland because of the persecution of Muslims by the Burmese government and Buddhist majority. According to varied Pakistani government sources and the Arakan Historical Society, there are some 200,000 Rohingya refugees residing in Pakistan. All of them have made a perilous journey across Bangladesh and India and have settled in Karachi. The Rohingya Muslim in Karachi have now obtained Pakistani citizenship. A report on human trafficking stated that Burmese people make up fourteen percent of Karachi's undocumented immigrants. Large scale Rohingya migration to Karachi made Karachi one of the largest population centres of Rohingyas in the world after Myanmar. In the recent years, scores of Burmese women seeking employment have entered the country. Different resources cite the number of these women to be in the thousands.

The Rohingya conflict is an ongoing conflict in northern Rakhine State, Myanmar, characterised by sectarian violence between the Rohingya Muslim and Rakhine Buddhist communities, a military crackdown on Rohingya civilians by Myanmar's security forces, and militant attacks by Rohingya insurgents in Buthidaung, Maungdaw, and Rathedaung Townships, which border Bangladesh. 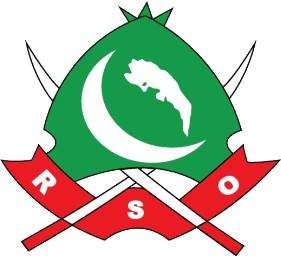 The Rohingya Solidarity Organisation (RSO) is a Rohingya political organisation founded in 1982, following a large scale military operation conducted by the Tatmadaw. The group was formerly a militant organisation, but have been militarily defunct since their armed branch merged into the Rohingya National Army (RNA) in 1998.

The Arakan Rohingya National Organisation (ARNO) is a Rohingya political organisation based in London, the United Kingdom. It had operated an insurgent army in the past, and is one of the few representative organisations of the Rohingya people.

The Rohingya Patriotic Front (RPF) was a political organisation headquartered in Cox's Bazar, Bangladesh. The RPF had a small and poorly armed insurgent army of 70 fighters, who were active along the Bangladesh–Burma border and in northern Arakan, Burma. The goal of the RPF was to create an autonomous Muslim zone for the Rohingya people.

Nurul Islam is a Rohingya political activist and Yangon-educated lawyer from Myanmar (Burma). He is the president of the Arakan Rohingya National Organisation (ARNO) and lives with his family in London, the United Kingdom.

Mohammed Abdul Gaffar (1910–1966), also known as Abdul Gaffar, was a politician from Arakan, Burma. He was elected to the Legislature of Burma in British Burma from Buthidaung in 1947. After Burmese independence in 1948, the President of Burma Sao Shwe Thaik appointed Gaffar as one of the seven members of the Inquiry Commission of Arakan in 1949. Gaffar was elected to the Chamber of Nationalities from Akyab West constituency in 1952. He was elected from Maungdaw in 1956. He also served as Parliamentary Secretary for the Ministry of Health in the government of Prime Minister U Nu. 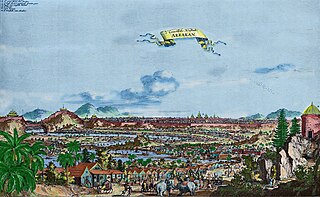 Arakan is a historic coastal region in Southeast Asia. Its borders faced the Bay of Bengal to its west, the Indian subcontinent to its north and Burma proper to its east. The Arakan Mountains isolated the region and made it accessible only by sea. The region now forms the Rakhine State in Myanmar.

Rohingya massacres may refer to:

Razia Sultana is a Bangladeshi lawyer who was born in Myanmar and has won International Women of Courage Award 2019.