The 1979 European Competition for Women's Football was a women's football tournament contested by European nations. It took place in Italy from 19 to 27 July 1979.

The tournament featured 12 teams, with games staged in Naples and Rimini. Considered unofficial because it was not run under the auspices of UEFA, it was a precursor to the UEFA Women's Championship. Denmark won the tournament, beating hosts Italy 2–0 in the final at Stadio San Paolo.

Economically, the tournament was not a success: [1]

The 1979 Italian tournament is often cited as being financially disastrous, but it was not so for the participating teams. Rather, the hosts bore the costs, but the financial problems affected the organization of the competition.

In the late 1970s the issue of international tournaments for women's football teams was contentious. The international governing body International Federation of Association Football (FIFA) refused several requests to sanction independently organised tournaments, declaring that such matters "were only possible through the National Association and the Confederations." Writing in 2007, Jean Williams observed that "The fact that they had been busy not organising these events seems to have escaped [FIFA's] notice. [2] According to Williams, FIFA's bureaucratic suppression of women's football was becoming unsustainable: "By the 1970s it simply wasn't a viable option for FIFA to ignore women playing the game and hope that they would go away." [3]

The European Confederation, Union of European Football Associations (UEFA), displayed little enthusiasm for women's football and were particularly hostile to Italy's independent women's football federation. Sue Lopez, a member of England's squad, contended that a lack of female representation in UEFA was a contributory factor: [4]

In 1971, UEFA had set up a committee for women's football, composed exclusively of male representatives, and by the time this committee folded in 1978 they had failed to organise any international competitions.

At a conference on 19 February 1980 UEFA resolved to launch its own competition for women's national teams. [5] The meeting minutes had registered the 1979 competition as a "cause for concern". [6]

The top team in each group advanced to the semi-finals.

After a goalless first half, Denmark took the lead 10 minutes into the second period through 18–year–old striker Lone Smidt Hansen (who later became Lone Smidt Nielsen through marriage). [10] Inge Hindkjær secured Denmark's victory with her fourth goal of the tournament, four minutes from full-time. [11] After the tournament, the Danish Football Association (DBU) were subject to media criticism for their failure to properly develop women's football.

The 1993 UEFA Women's Championship, also referred to as Women's Euro 1993 was a football tournament that happened between 1991 and 1993. The final games was held in Italy. The UEFA Women's Championship is a regular tournament involving European national teams from countries affiliated to UEFA, the European governing body, who have qualified for the competition. The competition aims to determine which national women's team is the best in Europe.

The football tournament at the 1960 Summer Olympics was held from 26 August to 10 September in 1960 throughout Italy. The tournament features 16 men's national teams from four continental confederations. The 16 teams are drawn into four groups of four and each group plays a round-robin tournament. At the end of the group stage, the first-ranked teams of each group advanced to the semi-finals, and culminating with the gold medal match in Rome on September 10, 1960.

The knockout stage of the 1990 FIFA World Cup was the second and final stage of the final tournament, following the group stage. It began on 23 June with the round of 16 matches, and ended on 8 July with the final match of the tournament held in Rome, in which West Germany beat the defending champions Argentina 1–0 to claim their third World Cup.

Boldklubben Femina is a women's association football team that play in Gladsaxe, Denmark. The club was formed in 1959 and play in white. In 2009 the club celebrated its 50th anniversary. At the time, the team was playing regional seven–a–side football under the auspices of the Sjællands Boldspil Union (SBU).

The United States men's national soccer team has played in several World Cup finals, with their best result occurring during their first appearance at the 1930 World Cup, when the United States finished in third place. After the 1950 World Cup, in which the United States upset England in group play 1–0, the U.S. was absent from the finals until 1990. The United States has participated in every World Cup since 1990 until 2014, but they did not qualify for the 2018 competition for the first time since 1986 after a loss to Trinidad and Tobago.

The FIFA World Cup, sometimes called the Football World Cup or the Soccer World Cup, but usually referred to simply as the World Cup, is an international association football competition contested by the men's national teams of the members of Fédération Internationale de Football Association (FIFA), the sport's global governing body. The championship has been awarded every four years since the first tournament in 1930, except in 1942 and 1946, due to World War II.

The UEFA European Championship is the main football competition of the men's national football teams governed by UEFA. Held every four years since 1960, in the even-numbered year between World Cup tournaments, it was originally called the UEFA European Nations Cup, changing to the current name in 1968. Starting with the 1996 tournament, specific championships are often referred to in the form "Euro 2008" or whichever year is appropriate. Prior to entering the tournament all teams other than the host nations compete in a qualifying process.

The UEFA European Football Championship is the main football competition of the men's national football teams governed by UEFA. Held every four years since 1960, in the even-numbered year between World Cup tournaments, it was originally called the UEFA European Nations Cup, changing to the current name in 1968.

Greece have qualified for only four out of sixteen UEFA European Championships, but crowned themselves European champions in 2004. At Euro 2004 they beat hosts Portugal in the final, resulting in their first major tournament win.

Italy have participated in 9 UEFA European Championships, and ended in the final at three occasions. They became European champions at home in 1968, the first European Championship they qualified for, and became tournament runners-up in Belgium/Netherlands 2000 and Poland/Ukraine 2012. 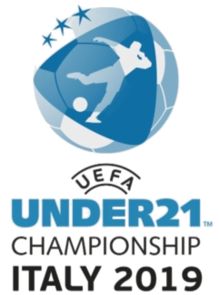 The final tournament of UEFA Euro 1968 was a single-elimination tournament involving the four teams that qualified from the quarter-finals. There were two rounds of matches: a semi-final stage leading to the final to decide the champions. The final tournament began with the semi-finals on 5 June and ended with the final replay on 10 June at the Stadio Olimpico in Rome. Italy won the tournament with a 2–0 replay victory over Yugoslavia.

The 1970 Women's World Cup was an association football tournament organised by the Federation of Independent European Female Football (FIEFF) in Italy in July 1970. It featured women's teams from seven countries and is the first known tournament to be named as a women's football World Cup.