A Rage in Harlem

A Rage in Harlem is a 1991 American crime film directed by Bill Duke and loosely based on Chester Himes' novel A Rage in Harlem. The film stars Forest Whitaker, Danny Glover, Badja Djola, Robin Givens and Gregory Hines. Producer Stephen Woolley intended it to be a comedy film, [3] and several reviewers have described it as such, [4] [5] [6] but this categorization has been disputed by director Bill Duke. [3]

The film premiered in competition at the 44th Cannes Film Festival [7] in its Grand Palais, receiving a "five-minute standing ovation." [8] It was also shown at the 2nd Stockholm International Film Festival. [9]

A beautiful black gangster's moll flees to Harlem with a trunkload of gold after a shootout, unaware that the rest of the gang, and a few other unsavoury characters, are on her trail.

William Horberg, eventually credited as an executive producer, got the project started when he optioned the rights to Himes' novel. [8] Hornberg, a first-time producer approached John Toles-Bey, a Chicago-based actor with no screenwriting credits, to draft the film's first script; the development effort gained steam after Hornberg met Kerry Boyle of Palace Productions, and through the efforts of Boyle and Stephen Woolley, the film was sold to Miramax Films and given the green-light. [8]

According to publicity leading up to the start of principal photography, Forest Whitaker was the first of the two lead actors to commit to the film, described as an action-comedy with "very dark" comedy. [1] Whitaker among others, was consulted as Boyle and Woolley sought an African American to direct the film, doing so because they believed "maintaining the cultural integrity of the novel demanded a black director"; they also wanted "someone who was older and secure enough to collaborate and make a picture that we could distribute widely, but who still had a passion for the material." [10] They chose Duke in part for his experience directing Hill Street Blues , experience that was key "because of the way that series mixed humor and violence." [10] Duke later cast Robin Givens to play the female lead after considering 300 women for the part. [10]

The film was shot in the Cincinnati, Ohio neighborhood of Over-the-Rhine, whose "un-gentrified area of the old downtown lower depths stood in quite nicely for ... 1950s Harlem." [8] About midway during production, it turned out that Duke and Woolley had undiscussed differences about the tone the film was going to take: [3]

About halfway through we [Woolley and Duke] were looking at a scene, and I turned to Bill [Duke] and said 'You know, that wasn't quite as funny as it was in the script. And I don't know why. And he said to me, 'We're not making no god-damn comedy.' I'd raised the entire money for this film on the basis that it was a comedy. It was Chester Himes, it was supposed to be funny. And a shiver went down my spine...I hoped that Bill was joking. But I realized he thought we were making Porgy and Bess .

The film currently holds a 65% rating on Rotten Tomatoes based on 34 reviews. Vincent Canby, reviewing the film for The New York Times , called it "painless, occasionally funny" but with a "heedlessly incomprehensible plot"; according to Canby, "Because the screenplay is so thin, the characters are revealed entirely by the actors who play them. Miss Givens does particularly well as a doxy with a heart of gold as well as a trunk full of it. She looks great and shows a real flair for absurd comedy. Mr. Hines, Mr. Whitaker and Mr. Glover also are in good form, as are Badja Djola, who plays Imabelle's intimidatingly large former lover, the guy she's stolen the gold from, and Mr. Toles-Bey, who, in addition to working on the screenplay, appears as one of the bad guys." [11]

According to Box Office Mojo, the film grossed about $10.4 million in the United States. [2]

Youssef Chahine was an Egyptian film director. He was active in the Egyptian film industry from 1950 until his death. A winner of the Cannes 50th Anniversary Award, Chahine was credited with launching the career of actor Omar Sharif. A well regarded director with critics, he was often present at film festivals during the earlier decades of his work, Chahine gained his largest international audiences as one of the co-directors of 11'9"01 September 11 (2002).

Day for Night is a 1973 French film directed by François Truffaut. It stars Jacqueline Bisset and Jean-Pierre Léaud. It is named after the filmmaking process referred to in French as la nuit américaine, whereby sequences filmed outdoors in daylight are shot using a filter placed over the camera lens or also using film stock balanced for tungsten (indoor) light and underexposed to appear as if they are taking place at night. In English, the technique is called day for night, which is the film's English title. 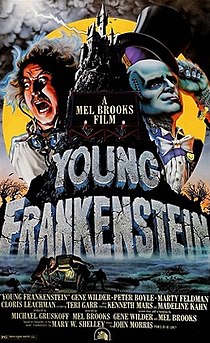 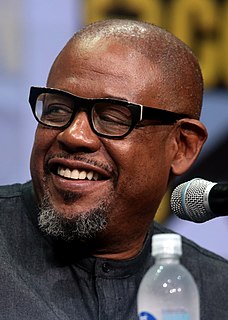 Chester Bomar Himes was a black American writer. His works include If He Hollers Let Him Go and the Harlem Detective series. In 1958 he won France's Grand Prix de Littérature Policière.

William Henry Duke Jr. is an American actor, film director, producer, and screenwriter. Known for his physically imposing frame, Duke works primarily in the action and crime drama genres, but occasionally appears in comedy. Frequently a character actor, he has starred opposite Arnold Schwarzenegger in Commando and Predator, and has appeared in films like American Gigolo, No Man's Land, Bird on a Wire, Menace II Society, Exit Wounds, Payback, X-Men: The Last Stand and Mandy; he often plays characters related to law enforcement.

Miami Blues is a 1990 American black comedy crime film directed by George Armitage, based on the novel of the same name by Charles Willeford. It stars Fred Ward, Alec Baldwin, and Jennifer Jason Leigh.

Easy Riders, Raging Bulls: How the Sex-Drugs-and-Rock 'N Roll Generation Saved Hollywood is a book written by Peter Biskind and published by Simon & Schuster in 1998. Easy Riders, Raging Bulls is about the 1970s Hollywood, a period of American film known for the production of such films such as The Godfather,The Godfather Part II,Chinatown,Taxi Driver,Jaws,Star Wars,The Exorcist, and The Last Picture Show. The title is taken from films which bookend the era: Easy Rider (1969) and Raging Bull (1980). The book follows Hollywood on the brink of the Vietnam War, when a group of young Hollywood film directors known as the "movie brats" are making their names. It begins in the 1960s and ends in the 1980s. 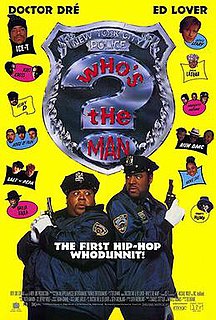 Who's the Man? is a 1993 American thriller comedy film directed by Ted Demme in his feature film directing debut. The film stars Yo! MTV Raps hosts Doctor Dré and Ed Lover as its two main protagonists and features cameo appearances from some of the top rap/hip-hop acts of the time, including Busta Rhymes, Bushwick Bill, Guru, Eric B., House of Pain, Ice-T, Kris Kross, Queen Latifah, KRS-One and Run-D.M.C. The film is also the feature film debut of Terrence Howard.

The Three Musketeers is a 1973 film based on The Three Musketeers by Alexandre Dumas. It was directed by Richard Lester and written by George MacDonald Fraser. It was originally proposed in the 1960s as a vehicle for The Beatles, whom Lester had directed in two other films.

The Harlem Detective series of novels by Chester Himes comprises nine hardboiled novels set in the 1950s and early 1960s: 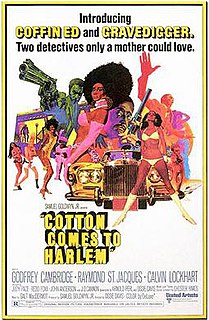 Cotton Comes to Harlem is an American neo-noir action comedy film co-written and directed in 1970 by Ossie Davis and starring Godfrey Cambridge, Raymond St. Jacques, and Redd Foxx. The film is based on Chester Himes' novel of the same name. The opening theme, "Ain't Now But It's Gonna Be" was written by Ossie Davis and performed by Melba Moore. It was followed two years later by the sequel Come Back, Charleston Blue. 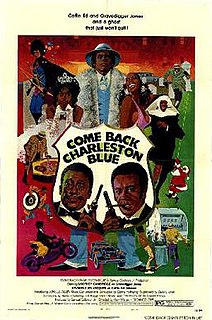 Come Back, Charleston Blue is a 1972 comedy film starring Godfrey Cambridge and Raymond St. Jacques, loosely based on Chester Himes' novel The Heat's On. It is a sequel to the 1970 film Cotton Comes to Harlem.

Blume in Love is a 1973 American romantic comedy drama film written, produced and directed by Paul Mazursky. It stars George Segal in the titular role, alongside Susan Anspach and Kris Kristofferson. Others in the cast include Mazursky, Marsha Mason and Shelley Winters.

Housekeeping is a 1987 American comedy-drama film written and directed by Bill Forsyth and starring Christine Lahti, Sara Walker, and Andrea Burchill. Based on the 1980 novel Housekeeping by Marilynne Robinson, the film is about two young sisters growing up in Idaho during the 1950s. After being abandoned by their mother and raised by elderly relatives, the sisters are looked after by their eccentric aunt whose unconventional and unpredictable ways affect their lives. Filmed on location in Alberta and British Columbia, Canada, Housekeeping won two awards at the 1987 Tokyo International Film Festival. 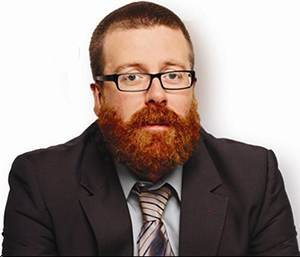 William Horberg is an American film producer, chair of the Producers Guild of America on the East coast, and guest curator at ArtYard. His films include Anthony Minghella's adaptations of the novels The Talented Mr. Ripley and Cold Mountain. He also produced the Fallen Angels series for Showtime from 1993-1995.

Nico Beyer is a German film director and producer. He is noted for his unique visual style and wide array of different techniques and formats. 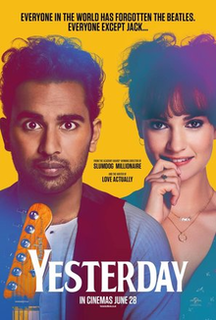 Yesterday is a 2019 British romantic comedy film directed by Danny Boyle and screenplay by Richard Curtis, based on a story by Jack Barth and Curtis. The film, named after the song of the same name written by Paul McCartney, stars Himesh Patel as struggling musician Jack Malik, who, after an accident, finds himself the only person who remembers the Beatles and becomes famous after taking credit for their songs. The film also stars Lily James as the protagonist's childhood friend and love interest, Kate McKinnon as his manager, and Ed Sheeran as a fictionalised version of himself.