Aaron Lawrence (born March 29, 1971) is an American gay pornographic film actor, director, sex advice columnist, author and entrepreneur. [1] [2] [3] After graduating from college Lawrence embarked on an unplanned male hustling career, which he parlayed into both a writing and acting career. [3] Lawrence, who is openly gay, then started his own gay pornographic video company utilizing his international travels as an escort to shoot amateur pornography films. [2] [3] He has authored two books, Suburban Hustler: Stories of a Hi-Tech Callboy (1999), an account of his own experiences as a male escort, and The Male Escort's Handbook: Your Guide to Getting Rich the Hard Way (2000), a "how-to" guide for those considering work as companions-for-hire. [3] He has also written articles for several publications, including Anything That Moves and Unzipped . While advertising himself, and speaking and writing about the gay and bisexual escort industry, he has helped revolutionize the public relation aspects.

In 2004 he became webmaster for www.GayGeek.com, a website which lists and reviews gay-oriented adult websites. [4] In 2008 he launched www.AdviceGeek.com, providing "smart gay sex advice for men who have sex with men". [5] He also developed AdviceWare, the software that runs the sites. [5] He lives in suburban New Jersey with his husband Jeff whom he met in 1992, married in 1999, and who also helps provide illustrations for his various websites. [2] [5]

After graduating from college Lawrence became depressed after a string of "100+ rejection letters", he became promiscuous and noting he was good at sex someone suggested he became a male hustler, which he did. [3] He commanded an hourly rate of more than GB£250 (US$350), which was much higher than average, which he attributed to his devotion to customer and self-satisfaction as well as his well-developed website, "By the time someone calls me for an appointment they already know who I am." [3] Lawrence is versatile performing both top and bottom sex roles. [3] Lawrence worked in escorting from December 1993 to 2006. [2] [3] [7] In addition to travel throughout the U.S., he traveled with clients on trips to Mexico and several locations in Europe, including Hungary, Germany, Ireland, and the Czech Republic.

A self-professed geek, Lawrence launched his first website in 1997, but it lasted less than a month before being shut down by AOL for "objectionable content". [1] [2] He quickly built a replacement on a private ISP promoting his escorting, modeling, and eventually movies and writings. [2] In 1999 he was Probie nomination for Best Web Presence. [2] [7] Lawrence's website was well-designed and offered updates on his availability and any appearances, as well as chronicling his experiences. [1]

By the time his books and movies were succeeding, his website regularly kept subscribers updated with every step of his career, including his 1999 marriage and "folksy" requests like his search for a housekeeper. [1] When he went on cross-country trips to promote his books or movies, he would invariably have clients on hand to buy his products. [1] The website also contained a paid subscriber area offering sexually explicit images of himself and models he recruited, as well as an online cinema offering video clips from himself and other amateur filmmakers. [1] He included detailed descriptions and even photos of his sexual exploits around the world, all designed to help sell his books, movies and "even a "dildo based on a mold of his 8-inch erection". [1] Using a laptop computer and modem while at film shoots, he offered well-narrated voyeuristic experiences of gay sex, often trying to share cultural differences between countries. [1]

During the production of his own amateur films he continued to perform in productions for other studios; in 1999 he appeared in Virgin No More, a film produced by All Worlds Video. [2] For his role in Studio 2000's Dream Team (1999 pornographic film) , he was nominated for "Best Supporting Actor" at the GayVN Awards. [2] He also appeared in Eric Magyar Goes West, an amateur film he did not produce. [2]

In October 2000 he released his second book, The Male Escort's Handbook: Your Guide to Getting Rich the Hard Way (2000), a "how-to" guide for those considering work as companions-for-hire. [2]

Lawrence also acted in most of the films he directed. 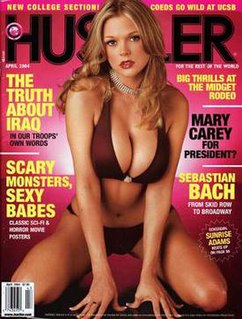 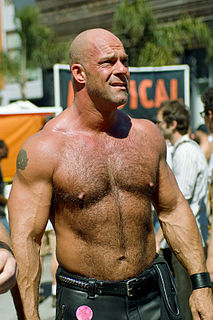 Johnny Hazzard is an American former pornographic actor, model, and recording artist who performs in gay and bisexual pornographic films for a number of studios, mainly Rascal Video, and has appeared in mainstream film and television productions under his own name. 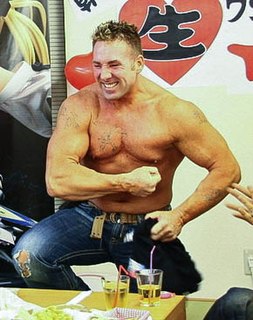 William Glen Harold Herrington, known professionally as Billy Herrington, was an American model and pornographic film actor. In the late 2000s, his appearances in various gay pornography movies led him to become a popular Internet meme on video sharing websites such as Japan's Nico Nico Douga, where he was referred to by the sobriquet "Aniki". Since then, at least 110,000 short mash-up parodies of his clips — known as "Gachimuchi" — have been produced by fans. 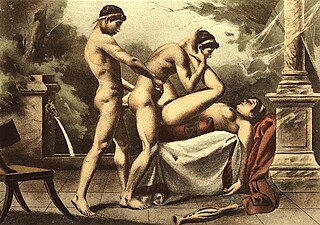 J. C. Adams is an American author, magazine editor, and reporter whose work focuses on the gay male pornographic industry, and a gay pornographic film director.

Will Clark is an American gay pornographic film actor. He is a member of the Grabby Awards Hall of Fame and has received a special citation from the GayVN Awards for his fundraising work in support of HIV/AIDS charities.

Freshmen was an American pornographic magazine published monthly by Specialty Publications, a division of LPI Media from 1982 to 2009. The magazine was geared toward gay men, and featured nude photos of men, 18–25 years old. The magazine was soft core, and distributed to mainstream news outlets, and to the soft core sections of adult stores. It was available in all Ruben Sturmen influenced outlets, probably due to the Flynt Distributing connection. It was distributed by Flynt Distributing, of the Larry Flynt empire. The magazine was an attempt to do a gay version of Hustler magazine. Its first editions featured all color photography with very high production values similar in style to Hustler. It also regularly featured male models with erections and exposed anuses, which set this magazine apart from competitors when it first appeared. It was published in a 10-issue per calendar year format, to accommodate the Flynt Distributing model, which put the current month publication on the stands with a next month date. After 2000, the focus was on top-line male porn models from Bel Ami, Falcon and other adult-video production companies. Other items, such as calendars, were also published using the same label. 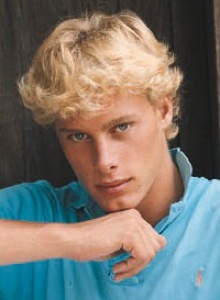 Dream Team is a 1999 gay pornographic film, written and directed by Jerry Douglas, starring Tony Donovan, Rick Chase and Kurt Young, and produced by Studio 2000. This movie tells the coming-of-age stories of a group of high school basketball team players who come to terms with their sexualities at a young age in 1957, and later in a 1962 reunion. 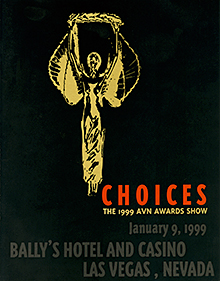