The introduction of Polaroid cameras in 1948 allowed amateurs to self-produce pornographic photographs immediately and without the need for sending them to a film processor, who might have reported them as violations of obscenity laws. [2] One of the more significant increases in amateur pornographic photography came with the advent of the internet, image scanners, digital cameras, and more recently camera phones. These have enabled people to take private photos and then share the images almost instantly, without the need for expensive distribution, and this has resulted in an ever-growing variety and quantity of material. [2] It has also been argued that in the Internet age it has become more socially acceptable to make and view amateur porn. [2] Starting in the 1990s, pornographic images were shared and exchanged via online services such as America Online (AOL). [3] Photo sharing sites such as Flickr and social networking sites such as MySpace have also been used to share amateur pornographic photographs – usually nudes but also hardcore photos. A more private and easy to control method of sharing photos is through Yahoo or Google Groups which have access restricted to group members.

Before the advent of camcorders and VHS tapes couples had to film themselves using Super 8 film which then had to be sent for film processing. This was both expensive and risky as the processing laboratory might report the film to the police depending on their local laws.

Amateur pornography began to rapidly increase in the 1980s, with the camcorder revolution, when people began recording their sex lives and watching the results on VCRs. [2] These home movies were initially shared for free, often under the counter at the local video store. [4] Homegrown Video was the first company to release and distribute these types of amateur adult videos commercially. [5] They were established in 1982, and AVN magazine ranked Homegrown Video #1 among the 50 most influential adult titles ever made because it resulted in the creation of the amateur pornography genre in adult video. [6] Several people who sent their tapes to Homegrown Video became professional porn stars, including Stephanie Swift, Melissa Hill, Rayveness, [7] and Meggan Mallone. [8] In 1991, in response to a Boston Globe investigation, video store proprietors reported that between 20 and 60% of video rentals and sales were of adult amateur home video films. [9]

One highly publicized case was that of Kathy Willets and her husband Jeffrey in 1991. Jeffrey was a deputy sheriff in Broward County, Florida who had recorded his "nymphomaniac" wife's sexual exploits with up to eight men a day. [10] He was charging up to $150 an hour and had also taped some significant local figures, so the two were arrested and charged with prostitution. Ellis Rubin acted as defense council and contended that Willets' nymphomania was caused by the use of Prozac. In the end, they pleaded guilty and both were convicted, although Kathy has gone on to a career in the adult film industry. [11]

The internet has also affected amateur authors sharing their pornographic stories. Text is much easier to disseminate than images and so from the early 1990s amateurs were contributing stories to usenet groups such as alt.sex.stories and also to online repositories. While most commercial sites charge for image content, story content is usually free to view and is funded by pop-up or banner advertising. Story submission and rating depends on registration as a user, but this is also usually free. Example sites include Literotica, True Dirty Stories [15] and Lust Library.[ citation needed ]

If the video or images in question are of individuals who are minors, including material created by the subject (ex. selfies, etc.), investigation by law enforcement can lead to charges for child pornography [20] as has happened in cases involving sexting. [21] [22]

Since the content of these websites is entirely free and of reasonably high quality, and because most of the videos are full-length instead of short clips, these websites have sharply cut in to the profits of pornographic paysites and traditional magazine and DVD-based pornography. [23] [24] The profits of tube-site owners are also squeezed in an increasingly crowded market, with the number of sites constantly growing. [23] 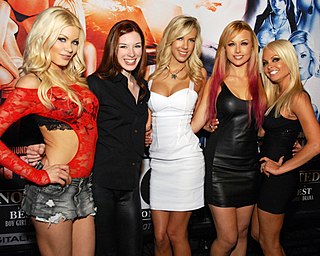 Evil Angel is an American production company and distributor of pornographic films, founded and owned by John Stagliano.

Flava Works, Inc. is a company that produces gay media featuring black and Latino men. Its headquarters are in Miami, Florida with a satellite office in Chicago, Illinois.

Homegrown Video is an amateur pornographic video production company based in San Diego. Established in 1982. it was the first company to commercially release and distribute homemade, amateur pornography on videotape. 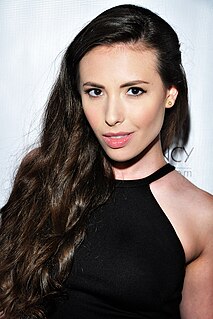 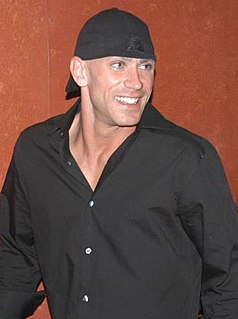 Steven Wolfe, known professionally as Johnny Sins, is an American pornographic actor, director, and YouTuber. Noted for his shaved head and muscular physique, he is consistently among the most popular pornography searches. He has received many accolades for his work, including two nominations for the AVN Award for Male Performer of the Year.