MTV News is the news production division of MTV. The service is available in the US with localized versions on MTV's global network. In February 2016, MTV Networks confirmed it would refresh the MTV News brand in 2016, to compete with the likes of BuzzFeed and Vice, however by mid-2017 MTV News was significantly downsized due to cutbacks. [1]

MTV News began in the late 1980s with the program The Week in Rock, hosted by Kurt Loder, the first official MTV News correspondent. Since 1990, the opening riff to Megadeth's "Peace Sells" has been the main opening theme for The Week in Rock.

Throughout the 2000s, MTV News began publishing digital editorial content via their website, Twitter feed, YouTube channel and Facebook page, offering information about MTV programming and music/pop-culture news aggregation. [6] In November 2015, MTV introduced a new direction for its news department and hired Dan Fierman, former editorial director of Grantland, as MTV's editorial director and announced it would produce longform journalism, think pieces and diversify its staff. However, in June 2017, MTV decided to restructure its news division with a greater focus on video, laying off much of their editorial staff. [7]

In December 2016, MTV News posted a video called "2017 New Years Resolutions for White Guys" as a New Year's special. The video features people telling white men what they think should do better in the then upcoming year of 2017. The video gained huge backlash for being racist and bigoted. [8] The reupload of the video currently has 54,910 dislikes and 1,152 likes on YouTube. [9]

MTV News in the U.S.

When MTV launched in Europe it used a variation of MTV News US reports with localized European reporting. Upon regionalization of MTV channels in 1997, MTV begun to localize presenters and reporting depending on the MTV region. Its flagship programming in Europe consisted of a daily news update MTV News Update and a weekly highlights show called MTV News Weekend Edition, these ceased airing in the early 2000s. With the move of MTV towards more reality based programming MTV News bulletins became a short news bulletin on the hours between 16:00 to 22:00 Monday to Friday on some MTV channels.

As of July 2013, Viacom International Media Networks has launched a new news bulletin which utilises the existing MTV News UK broadcasts. These MTV News International bulletins air on the majority of MTV channels (with exception to MTV US, MTV Canada, MTV Italy, MTV Brazil, MTV Japan, MTV China and MTV Latin America) in the English language which are either dubbed or subtitled. During MTV News broadcasts viewers are directed to mtvnews.co.uk for further news updates. The news bulletins are presented by MTV UK presenters.

MTV Networks confirmed it would relaunch the MTV Brand and its content in mid-2016, MTV have yet to confirm whether this will impact on news broadcasts outside the US. [1]

By 2016, MTV News International was significantly reduced with news reports confined to social media and some localized MTV websites in the UK, the Benelux, Australia and New Zealand.

The second incarnation of Viacom Inc., was an American multinational mass media conglomerate with interests primarily in film and television, which was formed as a spin-off of the first Viacom on December 31, 2005. It was one of two companies which succeeded the first Viacom, alongside CBS Corporation; both were owned by National Amusements, a theater company controlled by businessman Sumner Redstone. The spin-off was structured so that CBS Corporation would be the legal successor to the first Viacom, with the second Viacom being an entirely separated company.

VH1 is an American pay television network based in New York City owned by ViacomCBS. It was originally created by Warner-Amex Satellite Entertainment, at the time a division of Warner Communications and the original owner of MTV, and launched on January 1, 1985, in the former space of Turner Broadcasting System's short-lived Cable Music Channel.

Black Entertainment Television (BET) is an American basic cable channel that is part of the ViacomCBS Domestic Media Networks unit of ViacomCBS. It is the most prominent television network targeting African American audiences, with approximately 88,255,000 American households receiving the channel. The channel has offices in New York City, Los Angeles, and Chicago. The channel's former headquarters were in Washington, D.C.

MTV is a German language free-to-air television channel operated by ViacomCBS Networks EMEAA. The channel launched on March 7, 1997, as MTV Central, as part of a regionalisation strategy by ViacomCBS, then MTV Networks Europe.

Laura Whitmore is an Irish presenter and actress, known for presenting I'm a Celebrity...Get Me Out of Here! NOW! and Survival of the Fittest. In January 2020, Whitmore began presenting Love Island and its spinoff series, Love Island: Aftersun.

ViacomCBS Networks International, incorporated as ViacomCBS International Media Networks, Inc., is the international division of ViacomCBS. The division oversees the production, broadcasting and promotion of key ViacomCBS' brands outside of the United States. These brands include MTV, VH1, Nickelodeon, Comedy Central, BET, Colors and Game One, as well as CBS-branded channels.

MTV Classic is an American pay television network owned by ViacomCBS Domestic Media Networks. It was originally launched in 1998 as VH1 Smooth, an adult contemporary and smooth jazz channel. It was relaunched as VH1 Classic Rock in 1999, with an emphasis on classic rock. On August 1, 2016, in honor of MTV's 35th anniversary, the channel was rebranded as MTV Classic, and now exclusively shows music videos from all genres from the 1980s to the 2010s.

In March 2005, the prior Viacom announced plans of looking into splitting the company into two publicly traded companies. The company was not only dealing with a stagnating stock price, but also the rivalry between Leslie Moonves and Tom Freston, longtime heads of MTV Networks. In addition, the company was facing issues after MTV was banned from producing any more Super Bowl halftime shows after the Super Bowl XXXVIII halftime show controversy in 2004.

Maroon 5 is an American pop rock band that originated in Los Angeles, California. This is the list of Maroon 5's videography.

Pluto TV is an American over-the-top internet television service owned by Pluto Inc., a subsidiary of ViacomCBS. Co-founded by Tom Ryan, Ilya Pozin and Nick Grouf in 2013 and based in Los Angeles, California, Pluto is a free, advertiser-supported video on demand (AVOD) service that primarily offers a selection of programming content through digital linear channels designed to emulate the experience of traditional broadcast programming. The service's revenue is generated from video advertisements seen during programming within ad breaks structured similarly to those found on conventional television.

Robert Marc Bakish is an American business executive. He has been President and CEO of ViacomCBS since December 2019, formerly holding the same position at Viacom before the merger with CBS Corporation. 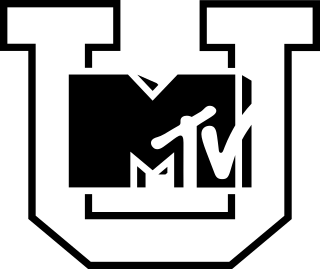 MTVU is an American digital cable television network owned by the Viacom Global Entertainment Group, a unit of the ViacomCBS Domestic Media Networks division of ViacomCBS. The channel was first known as VH1 Uno from 2000 to 2004 before changing names when Viacom expanded MTVU programming beyond more than 750 college and university campuses across the United States, as part of internally originated cable systems that are a part of on-campus housing or college closed-circuit television systems to digital cable in all homes. In 2018, the MTV Networks on Campus group was sold by Viacom to Cheddar to launch CheddarU, but the digital cable channel remained to the public through digital cable. Music videos played on the channel primarily consist of indie rock, pop punk and hip-hop along with limited original programming. MTVU also formerly owned RateMyProfessors.com.