Mormon pornography is a subgenre of pornography themed around the Mormon religion. According to the journalist Isha Aran, The Church of Jesus Christ of Latter-day Saints views Mormon pornography as blasphemous, and that most directors and performers in Mormon pornography are ex-Mormons. [1] Mormon pornography typically depicts sex acts between actors and/or actresses portraying members of the Church of Jesus Christ of Latter Day Saints. Mormon elders are depicted as domineering over their multiple wives, who obediently submit to their husband's commands, treating participation in the act as a sacred duty. Performers may be (initially) dressed in Mormon underwear, and the setting may be the inside of a Mormon temple. In accordance with stereotyped Mormon norms, profane language is absent. [1]

Aran writes that the genre originated in 2010 with the launch of the gay pornography site MormonBoyz.com. [1] Website founder Legrand Wolf claims to have graduated from Brigham Young University with a doctoral degree, [2] as well as being an ex-Mormon. [3] The site MormonGirlz.com, launched in 2014, by a woman known in the industry as Brooke Hunter, a 33-year-old ex-Mormon, features both heterosexual and lesbian relationships between Mormon characters. [1]

The Church of Jesus Christ of Latter-day Saints, often informally known as the LDS Church or Mormon Church, is a nontrinitarian, Christian restorationist church that considers itself to be the restoration of the original church founded by Jesus Christ. The church is headquartered in Salt Lake City, Utah, in the United States, and has established congregations and built temples worldwide. According to the church, it has over 16 million members and 65,000 full-time volunteer missionaries. In 2012, the National Council of Churches ranked the church as the fourth-largest Christian denomination in the United States, with over 6.5 million members there as of January 2018. It is the largest denomination in the Latter Day Saint movement founded by Joseph Smith during the early 19th century period of religious revival known as the Second Great Awakening.

Mormons are a religious and cultural group related to Mormonism, the principal branch of the Latter Day Saint movement started by Joseph Smith in upstate New York during the 1820s. After Smith's death in 1844 the movement split into several groups following different leaders; the majority followed Brigham Young, while smaller groups followed Joseph Smith III, Sidney Rigdon, and James Strang. The term Mormon has been used to refer to members of all these groups, but it most often refers solely to members of The Church of Jesus Christ of Latter-day Saints, as today this branch is far larger than all the others combined. Since 2018, the LDS Church has requested that its members be referred to as "Latter-day Saints". 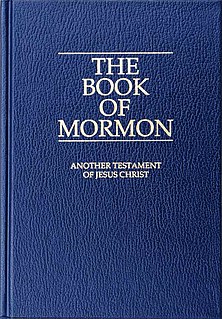 The Latter Day Saint movement is the collection of independent church groups that trace their origins to a Christian Restorationist movement founded by Joseph Smith in the late 1820s.

The Salt Lake Temple is a temple of The Church of Jesus Christ of Latter-day Saints on Temple Square in Salt Lake City, Utah, United States. At 253,015 square feet (23,505.9 m2), it is the largest LDS temple by floor area. Dedicated in 1893, it is the sixth temple completed by the church, requiring 40 years to complete, and the fourth temple built since the Mormon exodus from Nauvoo, Illinois, in 1846. On April 19, 2019 the LDS Church announced that the temple would close on December 29, 2019 for seismic renovations that are anticipated to take approximately four years.

The law of chastity is a moral code defined by The Church of Jesus Christ of Latter-day Saints. According to the church, chastity means that "sexual relations are proper only between a man and a woman who are legally and lawfully wedded as husband and wife." Therefore, abstinence from sexual relations before marriage, and complete fidelity to one's spouse during marriage, are required. As part of the law of chastity, the church teaches its members to abstain from adultery and fornication.

Sexuality has a prominent role within the theology of The Church of Jesus Christ of Latter-day Saints, which teaches that gender is defined in the premortal existence, and that part of the purpose of mortal life is for men and women to be sealed together, forming bonds that allow them to progress eternally together in the afterlife. It also teaches that sexual relations within the framework of opposite-sex marriage is healthy, necessary, and ordained of God. In contrast with some orthodox Christian movements, sexuality in the Church's theology is neither a product of original sin nor a "necessary evil". In accordance with the law of chastity, LDS Church doctrine bars sexual activity outside of heterosexual marriage.

The law of chastity of The Church of Jesus Christ of Latter-day Saints states that "sexual relations are proper only between a man and a woman who are legally and lawfully wedded as husband and wife." In principle, this commandment forbids all same-sex sexual behavior. Homosexuality-related violations of the law of chastity may result in church discipline.

Mormons have both used and been subjected to significant violence throughout much of the religion's history. In the early history of the United States, violence was used as a form of control. Many people of different faiths used violence in order to harass and persecute people who adhered to different religious beliefs. Mormons were violently persecuted and pushed from Ohio to Missouri, from Missouri to Illinois and from Illinois, they were pushed west to the Utah Territory. There were incidents of massacre, home burning and pillaging, followed by the death of their prophet, Joseph Smith. Smith died from multiple gunshot wounds in a gun battle while jailed in Carthage; Smith defended himself with a small pistol smuggled to him by Cyrus Wheelock while trying to protect himself against an illegal mob. There were also notable incidents in which Mormons perpetrated violence. Under the direction of Mormon prophets and apostles, the Mormon burned and looted Davies County, attacked and killed members of the Missouri state militia, and carried out an extermination order on the Timpanogos. Other Mormon leaders led the Mountain Meadows Massacre, Battle Creek massacre, and Circleville Massacre. Mormons have also been a major part in several wars, including the 1838 Mormon War, Walker War and Black Hawk War.

Hartman Rector Jr. was a general authority of The Church of Jesus Christ of Latter-day Saints from 1968 until his death. He was one of the first adult converts to the LDS Church to become a general authority during the second half of the 20th century. Rector served as a member of the First Council of the Seventy from 1968 to 1976 and as a member of the First Quorum of the Seventy from 1976 to 1994.

Mormon art comprises all visual art created to depict the principles and teachings of The Church of Jesus Christ of Latter-day Saints, as well as art deriving from the inspiration of an artist's LDS religious views. Mormon art includes painting, sculpture, quilt work, photography, graphic art, and other mediums, and shares common attributes reflecting Latter-day Saint teachings and values.

"To Young Men Only" is a sermon delivered by Latter-day Saint apostle Boyd K. Packer on October 2, 1976, at the priesthood session of the 146th Semiannual General Conference of The Church of Jesus Christ of Latter-day Saints. The sermon is addressed to young men of the Aaronic priesthood and discusses issues of human sexuality, puberty, and morality. From 1980 to 2016, the sermon was published as a pamphlet by the LDS Church. It has been criticized in several publications for allegedly encouraging violence against homosexuals. In 2016, the church discontinued the pamphlet.

Fight the New Drug is an anti-pornography nonprofit organization based in Utah. The group was founded by a team of members of The Church of Jesus Christ of Latter-day Saints, including its leader Clay Olsen, although it denies any formal connection with the church. It describes itself as "a non-religious and non-legislative organization..." The group was founded in 2009, and has received statements of support from public officials in Utah. Fight the New Drug describes pornography as a drug and argues that it is a public health issue.

Kristin Hodson is a Licensed Clinical Social Worker, AASECT Certified Sex Therapist, and prominent voice on the topic of sexual health in the Church of Jesus Christ of Latter-day Saints community.