Abderrazak Khairi (born 20 November 1962) is a Moroccan former football player and current coach of Sohar Club in the Omani League.

Morocco, officially the Kingdom of Morocco, is a sovereign state located in the Maghreb region of North Africa. It overlooks the Mediterranean Sea to the north and the Atlantic Ocean to the west. Morocco claims the areas of Ceuta, Melilla and Peñón de Vélez de la Gomera, all of them under Spanish jurisdiction. The capital is Rabat and the largest city Casablanca. Morocco spans an area of 710,850 km2 (274,460 sq mi) and has a population of over 35 million.

Suhar (Sohar) is the capital and largest city of the Al Batinah North Governorate in Oman. An ancient capital of the country that once served as an important Islamic port town, Suhar has also been credited as the mythical birthplace of Sinbad the Sailor.

Rabat is the capital city of Morocco and the country's seventh largest city with an urban population of approximately 580,000 (2014) and a metropolitan population of over 1.2 million. It is also the capital city of the Rabat-Salé-Kénitra administrative region. Rabat is located on the Atlantic Ocean at the mouth of the river Bou Regreg, opposite Salé, the city's main commuter town.

He also played for the Morocco national football team, scoring two goals for Morocco in the famous 1986 FIFA World Cup win against Portugal. [2]

The Morocco national football team, nicknamed "The Atlas Lions", is the national team of Morocco.has represented Morocco in international men's football competition since 1955. It is governed by the Royal Moroccan Football Federation (FRMF), the governing body for football in Morocco. 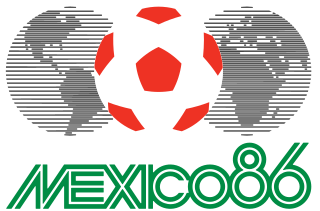 Khairi was appointed manager of MAS Fez in January 2006. [3]

Maghreb Association Sportive de Fès is a Moroccan football and basketball club based in Fes. The club was founded in 1946.

Auckland City Football Club is a New Zealand professional football club based in the suburb of Sandringham in Auckland, New Zealand. They currently compete in the ISPS Handa Premiership, the highest level of domestic football in New Zealand. Auckland City have established themselves as a major force in both New Zealand and Oceania, having won seven league titles and nine OFC Champions League titles since their foundation.

Hicham Zerouali, nicknamed 'Zero' or the 'Moroccan Magician', was a Moroccan footballer. He played as a forward for clubs in Morocco, Scotland and the United Arab Emirates. He was a Moroccan international who won 17 caps. 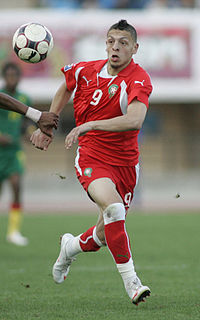 Abdessalam Benjelloun is a Moroccan footballer, who last played for FUS Rabat.

Moghreb Athlétic de Tétouan is a Moroccan football club based in Tetouan. MA Tétouan was founded in 1956 and used to compete in the Spanish leagues under the names Athletic Club Tetuán and Club Atlético de Tetuán (1947–1956) till 1956 when Morocco gained independence from Spain as the club made the transition to the Moroccan league after the club split in two forming Moghreb Atlético Tetuàn (Moroccan) and AD Ceuta FC (Spanish)

Tarik Sektioui is a Moroccan retired footballer who played as a right winger, and a current manager of Moghreb Tétouan and Morocco's U-19 national team.

Fath Union Sport is a Moroccan football club based in Rabat and currently playing in the first division. The club was founded on 10 April 1946. 'Fath Union Sport' is the name of the sports club which encompasses everything from Basketball to the game of Chess.

Nabil Baha is a retired Moroccan footballer who played as a striker.

Abdellah El-Ajri, "Blinda" was a Moroccan football player and manager and a handball player. 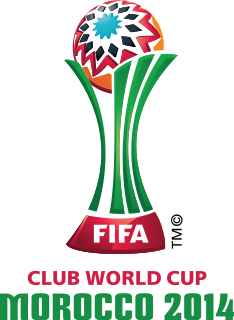 The 2014 FIFA Club World Cup was the 11th edition of the FIFA Club World Cup, a FIFA-organised international club football tournament between the winners of the six continental confederations as well as the host nation's league champions. It was hosted by Morocco for the second year in a row, and played from 10 to 20 December 2014.

The 2011–12 Botola is the 55th season of the Moroccan Top League, but the 1st under its new format of Moroccan Pro League. It began on Friday 19 August 2011 with Maghreb Fez beating Hassania Agadir 2–0. Raja Casablanca are the holders of the title. Moghreb Tétouan won the 2011–12 Botola, after defeating the runner-up FUS Rabat in the last game of the season at Stade Moulay Abdellah, Rabat. Both teams were pushing for the title until the last game. It was the first time in history of the Botola that a team from the north of the country wins it.

The 2012–13 Botola is the 56th season of the Moroccan Top League, but the 2nd under its new format of Moroccan Pro League. It began on 14 September 2012 with KAC Kénitra beating COD Meknès 2–1 in their away match and ended on 2 June 2013 when Wydad Fes beating Raja Beni Mellal 4-1 in their away match. Moghreb Tétouan are the defending champion but they finished in 6th place in this season. The winner of this season will qualify to the 2013 FIFA Club World Cup as host representatives.

El Houssaine Ouchla is a retired Moroccan football player. He started his career with FAR Rabat, making his debut in 1990. He joined Moghreb Tétouan in 2006 but returned to FAR Rabat for the 2008-09 season. After one season with Association Salé he retired from playing.

The 2013–14 Botola is the 57th season of the Moroccan Top League, but the 3rd under its new format of Moroccan Pro League.

John Goodison Irving is an English footballer who plays as a defender.

Ahmed Jahouh is a Moroccan professional footballer who plays for Indian club FC Goa, on loan from FUS Rabat, as a defensive midfielder.

Adam Ennafati is a Moroccan professional footballer who plays for Botola side Olympique Khouribga on loan from FUS Rabat as a Winger.

Noussair El Maimouni is a Moroccan professional footballer who plays as a midfielder for Moghreb Tétouan.