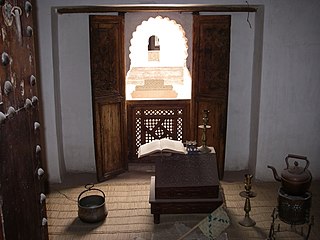 The Ben Youssef Madrasa is an Islamic college in Marrakesh, Morocco. Functioning today as an Islamic historical site, the Ben Youssef Madrasa was the largest Islamic college in Morocco during its height. Named after the Almoravid Sultan Ali ibn Yusuf, who expanded the city of Marrakesh and its influence considerably, the madrasa that stands today was built during the rule of Sa'di Sultan Sidi Abdallah al-Ghalib in the Marinid style. The layout of the building centers around a main courtyard, which is surrounded by east and west open-air galleries and student dormitories on the upper and lower levels. Like many Islamic buildings, the courtyard is defined by a large shallow reflective pool and intricate ornamentation of various materials, meant to enhance the multi-sensory experience of the building.

The 1949 FIBA European Championship, commonly called FIBA EuroBasket 1949, was the sixth FIBA EuroBasket regional basketball championship, held by FIBA Europe. Seven national teams affiliated with the International Basketball Federation (FIBA) took part in the competition. The competition was hosted by Egypt after the Soviet Union refused to host it, as was the Soviet's obligation as defending champion under FIBA Europe rules. Czechoslovakia, the silver medallist at EuroBasket 1947, had been the host that year, so was not asked to repeat hosting duties and those duties fell to bronze medallist Egypt.

Djibouti took part in the 1996 Summer Olympics, which were held in Atlanta, United States from 19 July to 4 August. The country's participation marked its fourth appearance in the Summer Olympics since its debut at the 1984 Summer Games in Los Angeles, United States. The delegation from Djibouti included five athletes, three in athletics and two in sailing. The three athletes for athletics were Ali Ibrahim, Omar Moussa, and Hussein Ahmed Salah while Robleh Ali Adou and Mohamed Youssef represented the country for sailing.

Yusuf is a male Arabic and Aramaic name, meaning "God increases" in Hebrew.

The 2005 World Youth Championships in Athletics were held in Marrakesh, Morocco on July 13–July 17. The host stadium was Stade Sidi Youssef Ben Ali.

Al-Najma Sport Club is a Saudi Arabian football team based in Unaizah that is currently playing in the Saudi Second Division League. Founded in 1960, the team plays in white and black color and green colours. 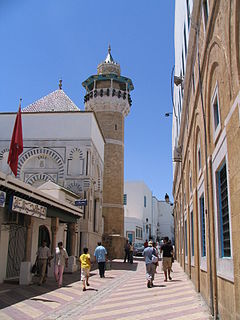 Youssef Dey Mosque, also known as Al B'chamqiya, is a 17th century mosque in Tunis, Tunisia, located in Medina area of the city. The mosque is considered significant as it was the first Ottoman-Turkish mosque to be built in Tunis. 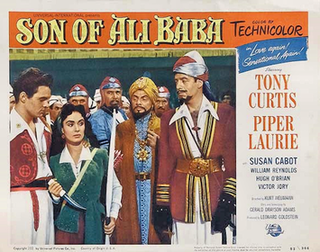 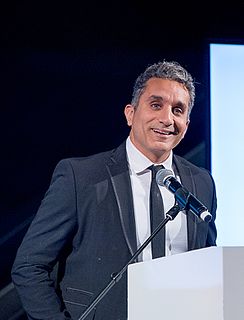 Al Asfour is a 1972 film directed by Youssef Chahine, with Ali Badrakhan as second director.

The Ben Youssef Mosque, is a mosque in the Medina quarter of Marrakesh, Morocco, named after the Almoravid emir Ali ibn Yusuf. It is arguably the oldest and most important mosque in Marrakesh.

Étoile Sportive de Métlaoui or ESM is a Tunisian football club, based in the city of Métlaoui in Tunisia. Founded in 1956, the team plays in red and yellow colors.

The 2014–15 Tunisian Ligue Professionnelle 1 season was the 89th season of top-tier football in Tunisia. The competition began on 13 August 2014 and ended on 2 June 2015. The defending champions from the previous season are Espérance de Tunis.

Sharif MoulayYoussef Alaoui is a cousin of Mohammed VI. He is reportedly a close friend of the King, who appointed him as an advisor to him. Youssef regularly appears beside the monarch in official visits, most recently in Tunisia in June 2014.

Sharif MoulayAbdallah Alaoui is a Moroccan businessman and advisor of king Mohammed VI, of whom he is the maternal first cousin and the paternal second cousin and a close friend. 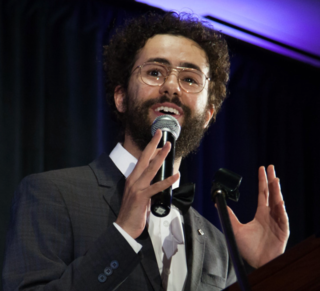 Ramy Youssef is an American stand-up comedian and writer of Egyptian descent. He is best known for his role as Ramy Hassan on the Hulu comedy series Ramy, for which he received a Golden Globe Award nomination in 2019.