"Alice James Books was founded as a co-operative press in Cambridge, MA in 1973 by five women and two men: Patricia Cumming, Marjorie Fletcher, Lee Rudolph, Ron Schreiber, Betsy Sholl, Cornelia Veenendaal, and Jean Pedrick. The intent of this company was to provide women with a greater representation in literature and involve the writer in the publishing process. While this may seem unbelievable today, in the 1970s women writers had a very difficult time being published. Recognizing this dire need, Alice James Books was established." [1] Maine Poet Laureate Betsy Sholl shared her memory of being a founding member of the press in an interview: "The experience of starting the press from the ground up, she says, was a heady one, not least because the organization put a special emphasis on publishing poetry written by women. 'There really were attitudes that made it hard for women to publish,' Sholl says. 'There weren't a lot of women being published, and male editors tended to be pretty disdainful.' " [2] The press is named for Alice James (sister of novelist Henry James and philosopher William James), whose fine journal and gift for writing were unrecognized within her lifetime. The mission of Alice James Books, a cooperative poetry press, is to seek out and publish the best contemporary poetry by both established and beginning poets, with particular emphasis on involving poets in the publishing process.

"The cooperative selects manuscripts for publication through its national, annual award, the Alice James Award , previously known as the Beatrice Hawley Award . The press previously offered the Kinereth Gensler Awards, a regional, annual competition open to residents of New England, New York and New Jersey. Winners of the Kinereth Gensler Awards became active cooperative members, judging future contests and participating in editorial and executive decisions. The Alice James Award does not carry a cooperative work commitment." [9] The Kundiman Poetry Prize was previously offered through Alice James Books for a first or second book by an Asian American poet. The prize was co-sponsored by Kundiman (nonprofit organization). [10] [11]

Since 1994, the press has been affiliated with the University of Maine at Farmington, [12] and offers a publishing internship program for UMF students which offers the students work experience and education. [13] [14] The press has received funding from the Maine Arts Commission, as well as receiving funding from UMF and the National Endowment for the Arts, [15] private foundations, and individuals. [16]

Mary Szybist is an American poet. She won the National Book Award for Poetry for her collection Incarnadine.

Donald Revell is an American poet, essayist, translator and professor.

Ellen Doré Watson is an American poet, translator and teacher.

Sarabande Books is an American not-for-profit literary press founded in 1994. It is headquartered in Louisville, Kentucky, with an office in New York City. Sarabande publishes contemporary poetry and nonfiction. Sarabande is an influential and nationally recognized literary press whose books have earned reviews in the New York Times.

The Alice James Award, formerly the Beatrice Hawley Award, is given annually by Alice James Books. The award includes publication of a book-length poetry manuscript and a cash prize. 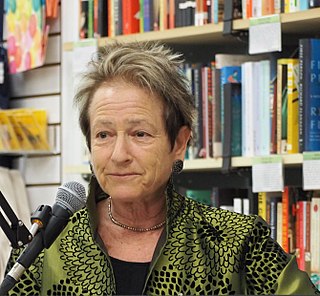 Robin Becker is an American poet, critic, feminist, and professor. She was born in Philadelphia, Pennsylvania, and is author of seven collections of poetry, most recently, Tiger Heron and Domain of Perfect Affection. Her All-American Girl, won the 1996 Lambda Literary Award in Poetry. Becker earned a B.A. in 1973 and an M.A. from Boston University in 1976. She resides in Boalsburg, Pennsylvania and spends her summers in southern New Hampshire.

April Ossmann is an American poet, teacher, and editor. She is author of Anxious Music, and has had her poems published in many literary journals including Harvard Review, Hayden’s Ferry Review, Puerto del Sol, Seneca Review, Passages North, Mid-American Review, and Colorado Review, and in anthologies including From the Fishouse, and Contemporary Poetry of New England. Her awards include a 2000 Prairie Schooner Reader’s Choice Award.

Kundiman is a nonprofit organization to support Asian American writers. The organization offers writing retreats, a reading series, a youth leadership intensive, and a poetry prize, and is dedicated to providing "a safe yet rigorous space where Asian American poets can explore, through art, the unique challenges that face the new and ever changing diaspora." Kundiman was co-founded in 2004 by Asian American poets Sarah Gambito and Joseph O. Legaspi, and has received support from the National Endowment for the Arts, the Geraldine R. Dodge Foundation, University of Virginia, Asian American Arts Alliance's (SOAR) Program, Philippine American Writers, PAWA, and individuals. 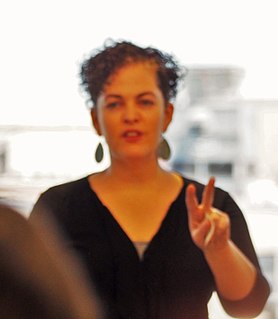 Shara McCallum is an American poet. She was awarded a 2011 National Endowment for the Arts Fellowship for Poetry. McCallum is the author of four poetry collections and lives in Pennsylvania.

Ann Killough is an American poet. She is author of Beloved Idea which won the 2008 L. L. Winship/PEN New England Award, and Sinners in the Hands: Selections from the Catalog, which received the 2003 Robert Phillips Poetry Chapbook Prize from Texas Review Press. She has had her poems published in literary journals and magazines including Fence, Field, Mudfish, Salamander, and Poet Lore. She grew up in North Carolina and makes her home in Brookline, Massachusetts, where she is one of the coordinators of the Brookline Poetry Series and of the Mouthful Reading Series in Cambridge. She is also a member of the Alice James Books Cooperative Board.

Bill Rasmovicz is an American poet. He is author of The World in Place of Itself, a 2006 Kinereth Gensler Award winner, which also won the 2008 Sheila Motton Award from the New England Poetry Club. Publishers Weekly likened the poems to "the haunted generalities of Franz Wright and the hunted, bomb-damaged villages of Charles Simic," in its review of the book. 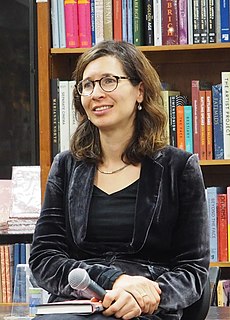 Idra Novey is an American novelist, poet, and translator. She translates from Portuguese, Spanish, and Persian and now lives in Brooklyn, New York.

Angelo Nikolopoulos is an American poet.

Jennifer Chang is an American poet and scholar.

Janine Joseph is a Filipino-American poet and author.

Matthew Olzmann is a poet, author, and essayist. His poetry collection, Mezzanines, was selected for the 2011 Kundiman Prize.