Ambika Mohan is an Indian actress known for her work in Malayalam cinema and television series mostly in supporting roles.[ citation needed ] She made her debut in the film, Meghamalhar (2001) and went on to act in over 300 films. [1]

Satyavati was the queen of the Kuru. She is the wife of king Shantanu of Hastinapura, and the great-grandmother of the Pandava and Kaurava princes. She is also the mother of the seer Vyasa, author of the epic. Her story appears in the Mahabharata, the Harivamsa, and the Devi Bhagavata Purana.

Idaya Kovil is a 1985 Indian Tamil-language film directed by Mani Ratnam, starring Mohan, Ambika, Radha and Goundamani. The score and soundtrack were composed by Ilaiyaraaja which went on to become huge hits. The film, released on 14 September 1985, did well at the box office. 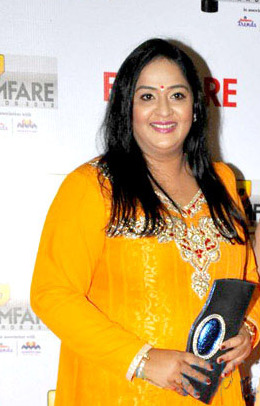 Udaya Chandrika, better known by her screen/stage name Radha, is an Indian actress, who predominantly appears in Tamil and Telugu films in addition to a few Malayalam, Kannada and Hindi films. She was one of the top heroine in the film industry for about a decade; from 1981 to 1991.

Ambika is an Indian actress known for her works predominantly across the entire the southern film industry films and in several teleserials. She also did one English film, to date. She was one of the top south Indian heroines for more than a decade from 1978 to 1989. Her younger sister Radha was also an actress. They acted together in a number of south Indian films during the peak of their careers.

Nammal (transl. Us) is a 2002 Indian Malayalam-language romantic comedy-drama film directed by Kamal and written by Kalavoor Ravikumar. The film features Jishnu, Sidharth Bharathan in the lead roles. It was the debut film of Sidharth, Renuka, and Bhavana. The music was composed by Mohan Sithara. The film was shot in Government Engineering College, Thrissur and Holy Trinity School, Kanjikode. 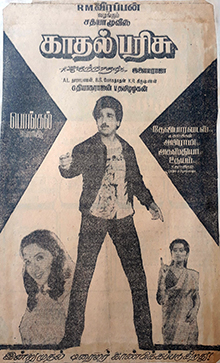 Kadhal Parisu is a 1987 Indian Tamil-language film directed by A. Jagannathan, starring Kamal Haasan, Ambika and Radha. The film was released on 14 January 1987, Pongal day and became commercial success.

Rajavinte Makan is a 1986 Indian Malayalam-language gangster film directed and produced by Thampi Kannanthanam from a screenplay by Dennis Joseph, based on the 1980 Rage of Angels by Sidney Sheldon. It stars Mohanlal as crime boss Vincent Gomes, and also features Ratheesh, Ambika and Mohan Jose in supporting roles. The film revolves around the rivalry between an underworld don, Vincent Gomes and the Home minister, N. Krishnadas. 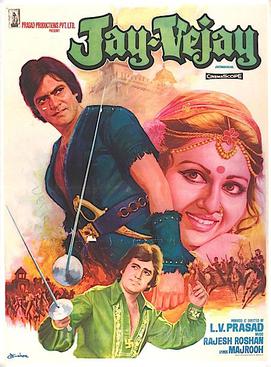 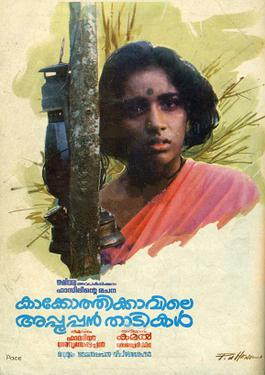 Kakkothikkavile Appooppan Thaadikal is a 1988 Malayalam-language drama film produced jointly by Ousepachan Vaalakuzhy and Fazil, directed by Kamal and written by Fazil. The film is heroine-oriented, in which Revathi and Ambika play the lead roles. The film features original songs composed by Ouseppachan, while cinematography was done by Vipin Mohan.

Chalisuva Modagalu is a 1982 Indian Kannada-language film directed by Singeetham Srinivasa Rao. The film stars Rajkumar, Saritha, Ambika and K. S. Ashwath and Puneeth Rajkumar as a child artiste. The movie is well known for its evergreen songs which were composed by the musical duo Rajan–Nagendra. The film was a major success at the box office upon its release. The movie was remade in Telugu in 1983 as Rajakumar starring Sobhan Babu with Ambika reprising her role. 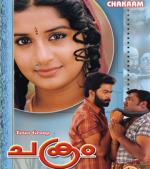 Naayika is a 2011 Malayalam drama film directed by Jayaraj. The film stars Urvasi Sharada, Jayaram, Padmapriya and Mamta Mohandas in the lead roles. 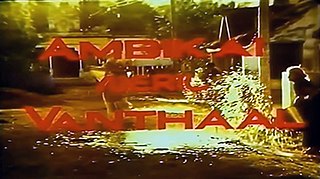 Ambigai Neril Vanthaal is a 1984 Indian Tamil-language film directed by Manivannan, starring Mohan, Radha and Urvashi. It was released on 8 December 1984.

Naan Paadum Paadal is a 1984 Indian Tamil-language film written and directed by R. Sundarrajan. The film stars Sivakumar, Mohan, Ambika and Pandiyan. It was released on 14 April 1984. The film was remade in Telugu as Mangalya Bandham (1985).

Vazhiyorakazchakal is a 1987 Indian Malayalam-language mystery drama film, directed and produced by Thampi Kannanthanam under the banner of Sharon Films based on a screenplay by Dennis Joseph. The film stars Mohanlal, Ratheesh and Ambika in lead roles along with Jagathy Sreekumar, Suresh Gopi and M. G. Soman appearing in other pivotal roles. The film has musical score by S. P. Venkatesh. This film was a commercial success. The film ran for 50 days in 9 release centers.

Chinna Kuyil Paaduthu is a 1987 Indian Tamil-language comedy drama film directed by P. Madhavan and written by Bala Murugan. The film stars Sivakumar, Ambika and Master Tinku. It was released on 24 July 1987.

Chakkalathi (transl. Mistress) is a 1979 Indian Tamil-language film starring directed by Devaraj–Mohan and written Alagapuri Alagappan. The film stars Sudhakar, Shoba, Ambika and Vijayan. It was the debut of Ambika, who later became one of Tamil cinema's biggest stars in the 1980s. The film was released on 7 December 1979.