Asianet's story starts much earlier than in 1993, it starts in Moscow. Dr Raji Menon was a student there and Mr P.Unnikrishnan was the correspondent of PTI in Moscow. Dr Raji Menon became a successful businessman based in Moscow and Mr P Unnikrishnan became the General Manager of PTI in India. When Mr Unnikrishnan initiated the idea of PTI TV, Dr Raji Menon's nephew Mr Sasikumar was appointed. When the Central government scrapped Doordarsan's monopoly, Mr Unnikrishnan was among the first to react and with Dr Raji Menon they planned to start a National channel. Four of the leading newspapers and PTI itself, were to join in with Dr Menon as the Chief promoter and Mr Unnikrishnan at the helm of the Channel (after his retirement from PTI). Dr Menon negotiated for a transponder on the Russian satellite EKRAN, with a powerful beam over India , which meant that using a cheep spiral antenna the signal could be received all over India. In the absence of any cable connectivity in India, without the sanction to do terrestrial transmission, this was a good solution. The transponder was very costly, the satellite had a life span of two years and there were only two transponders on the satellite.

In India, ill fate hit the idea. Mr Unnikrishnan was terminally ill with lung cancer and now the whole idea was in a limbo. Mr Sashikumar and Mr Madhavankutty of Mathrubhoomi (Delhi) suggested tuning down the idea to a Malayalam Channel and Dr Raji Menon agreed and the first Malayalam Channel was born. Asianet's logo is a derivative of Dr Menon's company logo. Dr Menon's office in Chennai became Asianet's head office. To address the issue of cable networking a separate company called Asianet Satellite Communications was formed. Mr P Bhaskaran the renowned poet was the figurehead chairman. Dr Menon being not full time in India, on his behalf Mr Sashikumar the favourite nephew was in charge. Asianet Communications was registered with Dr C P Chandrasekhar and Mr Sashikumar as the first directors as Dr Menon as a NRI needed RBI clearance to own a media company. Dr Menon bought Uma Studio from the famous Malayalam actor Mr Madhu and this became Asianet's Puliarkonam Studio. Mr Karunakaran the CM granted sanction to use the Electricity poles for cable networking. This was a mammoth effort.

In the absence of bank financing 50% shares of the cable networking company was offloaded to the Raheja Group. Dr Menon increased Mr Sashikumar's sweat equity from the initial 5% to 45% in stages. 5% of the equity was with Mr Raghu Nandan (Dr Menon’ elder brother). Dr Menon bought back the shares earlier given to Mr Sashikumar in 1999 at an agreed price, and took over full control of Asianet. Asianet was not in a comfortable financial situation then.

Asianet started one more channel as Asianet Global on 6 July 2001 to cater to the Malayalees outside India, and this was later restructured into a News Channel.

Asianet aired its first news bulletin starting 30 September 1995. Under an arrangement with the Russian embassy with the help of Dr Ratheesh Nair (current), the famous Gorky Bhavan was repaired and taken over by Asianet. Asianet news operated from Gorky Bhavan from 2000. The central Government sanction for a full-fledged news channel took time and hence it was launched much later than planned on 1 May 2003. Dr Raji Menon the Chairman was also the Chief Editor of the News Channel.

Dr Menon managed Asianet with the help of Mr Mohan Nair as COO, Mr Prem Menon as Head of Marketing, Mr K P Mohanan first as Vice President News and later as Managing Editor Asianet News and Mr. M P K Nair Director Finances. (ex Federal Bank Chairman). Mr K Madhavan and Mr MPK Nair were elevated to the board of Asianet. In the second half of 2000 Mr Madhavan was appointed as the M D of Asianet. In 2002, when Mr MPK Nair left Mr Jiothispathy took over the responsibility. Mr TN Gopakumar and Mr Zakharia had major contributions to make. Mr PRS Nair helped in technology related affairs in the studio. Mr Madhavan was given 5% shares in the company as sweat equity. This was later raised to 15%. The chief editor Dr Menon always insisted on the news channel being objective and politically neutral. Asianet +, one more entertainment channel was started from 27 October 2005 and now from Asianet 3 channels were in the offering.

Starting 2001 discussions were held with Mr Subhash Chandra of Zee TV on joining forces (strategic partnership) to expand Asianet TV into all the other 3 South Indian languages . An agreement was signed but the deal fell through. Sometime in 2004 Mr Srikandan Nair was elevated from the position of an anchor of Nammal Thammil to the position of chief of programs by Dr Menon.

In 2006, with his main interest now in hydrocarbons Dr Raji Menon offloaded 51% shares of Asianet to Mr Rajeev Chandrasekhar of Jupiter Capital.

Asianet was restructured into four companies in June 2008 (general entertainment, news, radio and media infrastructure). This move was to allow separate investments in each company. [5] Star India started talks with the owners of the Asianet channels in August, 2008. [3]

Star India eventually bought a 51% stake in Asianet Communications and formed a joint venture with JEV in November 2008. [6] The joint venture, called "Star Jupiter", comprised all general entertainment channels of Asianet 8 October 2013 Bombay 12 March Communications (Asianet, Asianet Plus, Asianet Suvarna and Asianet Sitara [7] ) and Star Vijay. Star India had reportedly paid $235 million in cash for the 51% stake and assumed net debt of approximately $20 million. [5] [3] It's not clear how much stake Menon held in the new Star Jupiter venture. Prior to forming the JV, it was known that the original founder had held about 26% stake. [4]

Asianet is the top rated Malayalam television channel. [8] Asianet has a presence in over 60 countries worldwide including the Indian sub-continent, China, South East Asia, Middle East, Europe, United States and the lower half of the former Soviet Union. [9] [10]

Due to COVID-19 pandemic situation, Malayalam movie Kilometers and Kilometers released directly through Asianet on 30 August 2020 on occasion of Onam. [11]

Asianet has an award ceremony for films presented annually by Asianet. Asianet says that awards ceremony has been instituted to honour both artistic and technical excellence in the Malayalam language film industry.

Awards for the Television Serials were started with this name, every year best serials were nominated and presented awards to them.

Malayalam journalism encompasses journalism published and broadcast in the Malayalam language. Modern Malayalam journalism can be traced to the publication of the Raajyasamaachaaram and the Pashchimodhayam under the direction of Hermann Gundert in June 1847. Kerala has the highest media exposure in India with newspapers publishing in nine languages, mainly English and Malayalam. 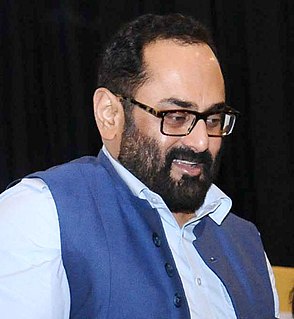 Rajeev Chandrasekhar is an Indian politician of the Bharatiya Janata Party. He is the incumbent Minister of State for Skill Development and Entrepreneurship and Electronics and Information Technology of India. Rajeev is also an entrepreneur, technocrat and a member of parliament in the Rajya Sabha from BJP representing Karnataka. He also served as National Spokesperson of BJP and was vice-chairman of the Kerala faction of the BJP-led coalition National Democratic Alliance.

Star Singer was an Indian music reality-television competition, broadcast on Asianet and previously sponsored by Idea Cellular. The show, which selected contestants in the age group of 15–35 years determined the winner based on their skill in singing and entertainment. From Season 1 to 7, Text messages are sent by the shows' audience to vote for the best performing participant and a small weightage of this score is considered for a candidate to be shortlisted to next round. Season 8 onwards voting is conducted on Disney+ Hotstar, Star Network's official OTT platform. The show also features a panel of judges who are prominent personalities in the Malayalam music industry and they offer scores and evaluations of performance to the contestants in every stage of the competition.

Asianet Suvarna News is a Kannada news channel owned by Asianet News Network, a news media subsidiary of Jupiter Capital Private Limited. The majority shareholder of the company is Rajeev Chandrasekhar, who is a Rajya Sabha member from the Bharatiya Janata Party. Launched on 31 March 2008, the channel was the third news channel to be aired in the Kannada language. The channel has telecast fabricated news and social media hoaxes on various occasions.

Disney Star Private Limited is an Indian media conglomerate and a wholly owned subsidiary of The Walt Disney Company India. It is headquartered in Noida, Uttar Pradesh. Disney Star network runs more than 70 TV channels in eight languages, reaching out to 9 out of 10 cable and satellite TV homes in India. The network reaches approximately 790 million viewers a month across India and more than 100 countries. Disney Star generates more than 30,000 hours of content every year. Disney Star is the largest television and entertainment network in India. 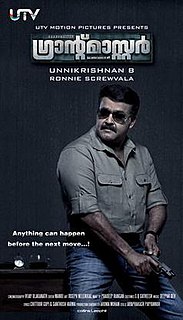 Grandmaster is a 2012 Indian Malayalam-language neo-noir action thriller film written and directed by B. Unnikrishnan and produced by Ronnie Screwvala and Siddharth Roy Kapur under the production company UTV Motion Pictures. The film stars Mohanlal as Chandrasekhar, a senior IPS officer who begins investigating a series of murders after receiving an anonymous note. The supporting characters are played by Priyamani, Narain, Anoop Menon, Babu Antony, Jagathy Sreekumar, and Arjun Nandhakumar. 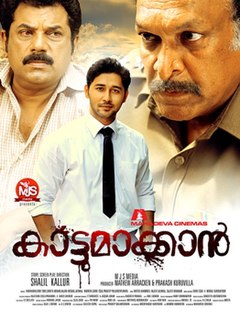 Uppum Mulakum is an Indian Malayalam-language sitcom, that has been broadcast on Flowers since 14 December 2015. Created and directed by R. Unnikrishnan, the sitcom depicts the everyday life of Balachandran Thampi, his wife Neelima, and their five children. The main cast includes Biju Sopanam, Nisha Sarang, Rishi S. Kumar, Juhi Rustagi, Al Sabith, Shivani Menon and Baby Ameya. Baby Ameya joined the show as the newborn baby of the family in May 2018.

Krishna Praba is an Indian actress and professional dancer who chiefly appears in Malayalam films. She made her entry into the film industry with the film Madampi (2008), directed by B. Unnikrishnan. She played the character Mollykutty in Life of Josutty (2015), directed by Jeethu Joseph.

Asianet may refer to:

Kudumbavilakku is an Indian Malayalam-language television soap opera drama. The show premiered on Asianet channel and has streamed on Disney+ Hotstar since 27 January 2020. Meera Vasudevan portrays the lead role in the series, returning to television after thirteen years.

Anoop Krishnan is an Indian television actor, director and anchor, who works predominantly in Malayalam film industry. He is mainly noted for the role Kalyan in the television series Seetha Kalyanam telecasted in Asianet.

Ente Manasaputhri was a 2007 Malayalam Television soap opera telecasted on Asianet TV channel from Monday to Friday at 7:00PM IST. It is remarked as one of the top rated TV series in Malayalam with a stellar star cast.