Seven friends, every week, have an appointment that they cannot, and do not want to miss for any reason: their five-a-side football match, for which they leave family, work, meetings, university lessons. The team participates in an amateur tournament, the winners of which will play against the Old Boys, a team of former professional players.

The striker Vittorio Trebbi is a fifty-year-old divorced, owner of the Diana company, manufacturer of coffee machines and sponsor of the team; Adam, Vittorio's son, is the goalkeeper, who in life is a tattoo artist; Piero, an economics student and Adam's best friend, is in defense; Lele, chief worker in Diana, is the median; Filippo is specialized in going to him and provoking his opponents in order to knock them down or give them warnings; Mina, the captain, is a sports journalist former player of C, now fat and smoker, who enters the field only to beat the free-kicks ("He plays 3 minutes in the whole championship, but scores 20 goals. Mina confirms his average match : 6 cigarettes, 4 coffees, 1 goal and 2 packets of chips "); the Venezia is a worker in Diana, the bench par excellence.

The progress of the championship and the lives of the seven protagonists intertwine and influence each other. Vittorio is in negotiations for the sale of the company to a French group and is dating Viola, a twenty-two year old who juggles various occasional jobs: therefore, he has a forward mentality, vigorous and proactive; Adam was emotionally hurt by an ex-girlfriend of his and badly tolerates his father for cheating on Diana, his mother: he has therefore decided to live his life without initiative and in defense, so the goalkeeper is the perfect role; Piero organizes everything in his life, from the hours of study to those of the couple with Martina (Viola's friend): on the pitch he manages to organize his teammates, from whom he is called "Precisetti"; Lele, as a midfielder, is forced to run on the pitch, but also in life having to juggle work, sport and family life with his wife Silvia and two small children; Filippo manages to be hard-hearted both in the field and at work, often putting the gain in front of human relationships; Venezia has no particular quality, in fact in the game it is always on the bench; Mina is the captain and her role is to advise the team.

Vittorio tries to sell the company (whose name was clearly given in honor of his ex-wife when they were married) to a French group, but mysteriously the group withdraws the offer, the company is devalued enormously and goes into crisis. He also begins to struggle on the pitch, and one night has a tachycardic attack while in bed with Viola. Vittorio at the hospital meets Diana, a doctor on duty: she discovers a series of doping substances in his blood that were about to cause a heart attack. Threatening him to report, she orders him to detox by having her visit him every week. Adam, while bringing his father the change for the night, discovers that he is sleeping with Viola, his ex who broke his heart.

Martina discovers she is pregnant, but confesses to Viola that her father is Adam: suffocated by Piero's meticulous precision she had allowed herself a little leisure on March 8 and, thanks to alcohol and marijuana, she went to bed with him. When Piero accidentally discovers the fact (thinking he is the father) he asks Mina for advice and totally changes his attitude towards life, he takes more initiative and proposes to Martina to open a business of exchange and sale of all those objects for newborns of which after a certain age of the child, families no longer need.

Lele and Silvia experiment with various possible solutions to their married life, arriving at a disastrous dinner in which he puts marijuana in the vegetable pie that serves his wife and Silvia some Viagra in his broth: everything seems to be fine, when the daughter, left on purpose from his grandparents, he breaks his arm and they have to go to hospital in pitiful conditions. In the end, Lele also asks Mina for advice and finds a solution: since Silvia has given up her career as a restorer, she puts herself on leave at the company, becoming a housewife and making her wife work. She thus finds serenity with the job she studied for, and he manages to feel useful for his wife and family.

These upheavals are also reflected on the pitch: Piero and Vittorio switch roles, Adam is completely lost and Lele, after an initial phase of exhaustion, finds strength.

Vittorio talks to Adam and discovers that Diana is still in love with him: the weekly visits are just an excuse to be able to see him. Vittorio finally leaves Viola, to Adam's delight. The company is finally sold to the French, and Vittorio receives a visit from Piero, who asks him for a loan to start the business of buying and selling baby items: Vittorio accepts, as long as he swaps roles in the game with the Old Boys. Vittorio's new vigor leads him to score a goal.

Just after this game (disastrously lost) Vittorio discovers that it was Filippo who maneuvered the movements of the French to make the company devalue and buy it back at a lower price: after hitting him in the face, Vittorio chases Filippo from the team. Here Mina admits that she has always understood Filippo's nature for Nereo Rocco's law, "on the pitch as in life". He bitterly admits that he can only give advice to others and stay on the bench: he too is divorced and his ex-wife is remarrying.

Lele and Silvia rediscover the balance and she is pregnant again.

The new season begins: the new sponsor of the team is Piero's business, Vlad, a violent Serbian client of Adam's, has been taken in for Filippo, and Piero is convinced that he is a father. 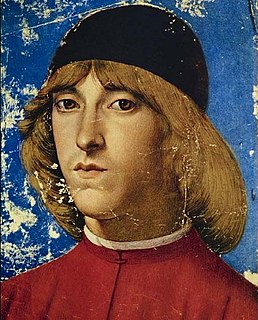 Piero di Lorenzo de' Medici, called Piero the Unfortunate, was the gran maestro of Florence from 1492 until his exile in 1494.

Count Vittorio Alfieri was an Italian dramatist and poet, considered the "founder of Italian tragedy." He wrote nineteen tragedies, sonnets, satires, and a notable autobiography.

Vittorio the Vampire (1999) is the second novel in Anne Rice's New Tales of the Vampires series. It is the only vampire novel by Rice besides Pandora in which the lead character of her series The Vampire Chronicles, Lestat de Lioncourt, does not appear; although Vittorio references him briefly.

Dante's Cove is an American LGBT-oriented supernatural soap opera which aired on here! from October 7, 2005 through December 21, 2007. Created, written by Michael Costanza and directed by Sam Irvin, the series combines elements of the horror and soap opera genres in telling the story of Kevin and Toby, a young couple seeking to be together and to overcome the dark mystical forces that conspire to separate them. The show debuted to a mixed critical reception. Although an announcement was made regarding a fourth season, no fourth season was produced. In 2020, Dante's Cove is currently streaming on Hulu.

Valeria Moriconi was an Italian actress who appeared both in movies and on stage. 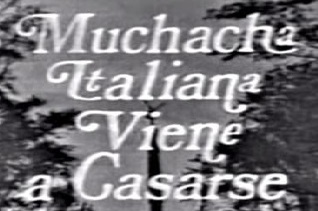 The Last Kiss is a 2001 Italian comedy-drama film written and directed by Gabriele Muccino.

Un medico in famiglia is an Italian television series, based on the format of the Spanish series of Telecinco Médico de familia, produced by Publispei and Rai Fiction, broadcast on Rai 1 from December 6, 1998 to November 24, 2016. 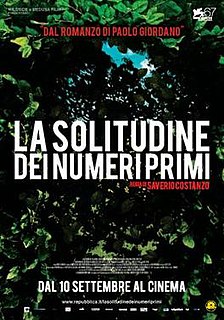 The Solitude of Prime Numbers is a 2010 Italian drama film based on the novel of the same name by Paolo Giordano. Directed by Saverio Costanzo, the film was nominated for the Golden Lion at the 67th Venice International Film Festival. The soundtrack was composed by Mike Patton and released in 2011. The title is explained by arguing that Mattia and Alice are like twin primes: both lonely, close to each other but separated by an even number.

Many Kisses Later is a 2009 Italian-French romantic comedy film directed and co-written by Fausto Brizzi and interpreted by an ensemble cast. 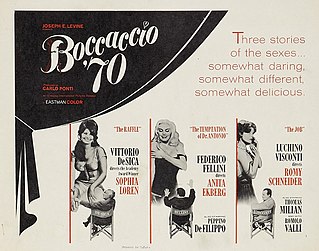 Boccaccio '70 is a 1962 Italian film produced by Carlo Ponti and directed by Mario Monicelli, Federico Fellini, Luchino Visconti and Vittorio De Sica from an idea by Cesare Zavattini. It is an anthology of four episodes, each by one of the directors, all about a different aspect of morality and love in modern times in the style of Giovanni Boccaccio.

"Ron and Tammys" is the second episode of the fourth season of the NBC sitcom Parks and Recreation. It originally aired on NBC on September 29, 2011. In the episode, Ron Swanson is confronted by his first ex-wife, Tammy 1 who has a malevolent influence on him, and Leslie Knope becomes involved in Ron's personal life. This episode marks the first and only appearance of Ron's mother, Tamara. It garnered 4.33 million viewers, an increase in viewers from the previous episode's 4.11 million.

Lives of the Saints is a 2004 TV miniseries directed by Jerry Ciccoritti, written by Malcolm MacRury, and based on the 1990 novel, Lives of the Saints, by Nino Ricci. The film stars Sophia Loren, Fab Filippo and Jessica Paré.

Cuando los hijos se van is a Mexican telenovela produced by Silvia Pinal for Televisa in 1983.

People Who Are Well is a 2014 Italian comedy-drama film written and directed by Francesco Patierno. It is loosely based on the novel La gente che sta bene by Federico Baccomo. 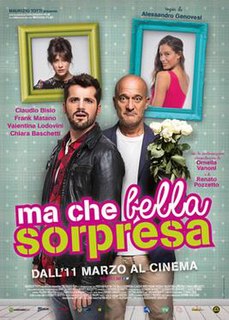 Suburra: Blood on Rome is an Italian crime drama web television series set in Rome and a prequel to the 2015 film Suburra, in turn inspired by the novel of the same name by Giancarlo De Cataldo and Carlo Bonini. The series was developed by Daniele Cesarano and Barbara Petronio for Netflix, making it its first Italian-language original television series. It is produced by Cattleya in association with Rai Fiction and Bartleby Film.