Andreas Hedlund (born 17 September 1973), better known by his stage names Vintersorg and Mr. V, is a Swedish vocalist and multi-instrumentalist who has played in several heavy metal bands. [1]

Hedlund's musical career came to be in 1994 when he and a few other musicians formed "Vargatron". The original style was meant to be rooted in black metal but using mostly clean vocals and only a few moments of the traditional grim screaming. After a few line-up changes, the group broke up in 1996, but Hedlund still wanted to work with the songs he wrote for Vargatron and decided to record them by himself. As a result, he revived the act as a solo project and changed its name to "Vintersorg", a project he continues to this day.

As the year 2000 arose, so did a new project for Hedlund. This new band, Havayoth, was a gothic metal band formed by Marcus "Vargher" E. Norman from Ancient Wisdom, Bewitched, Naglfar, and Throne of Ahaz and Morgan Hansson, also from Naglfar. Hedlund sang on the 2000 album, His Creation Reversed , but left the band a few years later before he participated with them on anything else. The band continues on today without Hedlund. [2]

Following the departure of ICS Vortex as vocalist, Borknagar was in need of a new singer. Having been friends for some time, Øystein G. Brun asked Hedlund to take the reins for their forthcoming album, Empiricism . Hedlund joined the band in 2001 and he released a total of six albums with the bands, five with Century Media Records, and one with Indie Recordings. [3]

Being long time friends, Øystein G. Brun and Hedlund eventually began to form a musical bond and found a mutual vision. They played with the idea of a band starting in 2000, but when Hedlund joined Borknagar the idea was put on hold for some time. Starting in 2005, the project finally returned though, originally called Ion, and now called Cronian, the band was their joint vision. [1] Music that went beyond standard song structures to create a cinematic feel, while invoking images of grand and epic arctic landscapes was the goal, and the goal came into fruition on 27 March 2006 with the release of Terra , through Century Media Records. [4]

While recording True North, Hedlund 'amicably' left Borknagar in 2019, due to health and work-related issues. [5] However, he continued to collaborate with Brun on Cronian, which, as of October 2019, are expected to release a new album 'whenever time allows for that'. [5]

In 2002, Benny Hägglund, long time friend of Hedlund, and live drummer for Vintersorg, began working on music for a project that would combine melody and aggression into energetic songs. He eventually felt compelled to ask Hedlund for support in this project, thus Fission was born. With Benny playing drums, guitar, and bass, and Hedlund singing and adding his experimental edge to their melodic thrash metal with his unique synths, the band recorded their first full-length, entitled Crater , released in 2004 through Napalm Records. [6]

In the autumn of 2004, Hedlund began writing music in his spare time. The difference though was this music was a reflection of a more personal, emotional side of his mind, and it came out in the form of progressive rock & symphonic rock rather than any of the genres of metal he had become known for. As he continued to write more, this project began to culminate into a full-fledged solo band, which he called Waterfield. [7]

Eventually Hedlund had enough material for a full-length album, which he released through Lion Music on 20 January 2006 under the title The Astral Factor , now with the band name Waterclime. [8]

Vintersorg is a Swedish band from Skellefteå, formed in 1994 under the name Vargatron. Musically, Vintersorg has covered a wide number of heavy metal genres; while the band is mostly rooted in extreme metal styles, particularly black metal and Viking/folk metal, it has also expanded into progressive metal and avant-garde metal. Lyrically, the band deals with topics on fantasy, mythology, nature, the cosmos, and metaphysics. Vintersorg means "Winter Sorrow," but the name was taken from The Legend of the Ice People series by Margit Sandemo, where the character Vintersorg is the son of a great pagan leader.

Borknagar is a heavy metal band from Bergen, Norway, founded in 1995 by Øystein Garnes Brun. The band's style combines black metal and folk metal with progressive and melodic elements. Borknagar's lyrics often deal with philosophy, paganism, nature, and the cosmos.

Martin van Drunen is a Dutch death metal vocalist, who started out in the band Pestilence. In this band, he also performed the bass duties live. He recorded two albums with them, Malleus Maleficarum and Consuming Impulse. After his departure from Pestilence, he joined Asphyx as the singer and bass player in 1990 and recorded five albums in total. He performed the vocals on Comecon's second album Converging Conspiracies in 1993 and then formed his own band called Submission. In 1995, he was asked to replace Karl Willetts in the UK death metal band Bolt Thrower. He did two tours with them, but never recorded an album.

Lars Are Nedland, known also as Lazare, from Kristiansand, Norway, is the vocalist, drummer, and keyboardist for acclaimed avant-garde black metal band Solefald. He is also keyboardist for the progressive black metal act Borknagar. He composes much of the music and all the arrangements for violin and cello on the Solefald albums, Red for Fire: An Icelandic Odyssey Part 1 and Black For Death: An Icelandic Odyssey Part 2. He also has written some lyrics for the band, including the songs "04.34 pm", "Fluorescent", and "White Frost Queen." He and vocalist/guitarist/bassist/main lyricist Cornelius Jakhelln started Solefald in August 1995.

The Archaic Course is the third studio album by Norwegian metal band Borknagar. It is the first album to feature Simen "ICS Vortex" Hestnæs on vocals following the departure of Kristoffer "Garm" Rygg, and the first with guitarist Jens F. Ryland. The album also features contributions from Enslaved guitarist Ivar Bjørnson, although he was not credited as part of the band in the album's liner notes. This is also the last album to feature drummer and founding member Erik "Grim" Brødreskift, who died of a deliberate drug overdose shortly after its release. 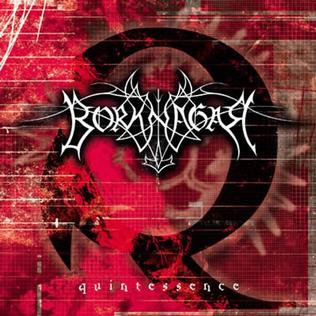 Quintessence is the fourth studio album by Norwegian metal band Borknagar. It was recorded at The Abyss Studios in January 2000 and mixed by Peter Tägtgren.

Empiricism is the fifth studio album by Norwegian metal band Borknagar. It is their first studio album to feature Vintersorg frontman Andreas Hedlund on vocals and Jan Erik "Tyr" Tiwaz on bass. It was also the last album to feature Jens F. Ryland on guitar until his return to the band in 2010.

Epic is the sixth studio album by Norwegian metal band Borknagar.. It was released in 2004 on Century Media Records.

Origin is the seventh studio album by Norwegian metal band Borknagar. Origin explores the band's more progressive and traditional elements and is primarily an acoustic effort.

Cronian is a progressive/avant-garde metal band from Norway and Sweden founded in 2004 by Øystein Brun and Andreas Hedlund, also known as Vintersorg. The band's music is heavily symphonic and programmed, combining melodic singing and harsh vocals, all aiming to create a very cold and cinematic feeling.

Terra is the debut full-length album by Norwegian/Swedish progressive metal band Cronian. The album was sporadically recorded through 2004 and 2005, with the two members of the band separated by their countries most of the time. The album was released in Europe on March 27, 2006, and on April 18, 2006 in North America.

Per Møller Jensen is a Danish drummer, best known as the former drummer for the Swedish thrash metal band The Haunted. He has earlier played drums in Invocator, Konkhra and Nightrage. He also played drums for Artillery’s Album B.A.C.K.

Øystein Garnes Brun is the guitarist and founder of the Norwegian black metal supergroup Borknagar. He has been the only permanent member of the group and has written almost all of their songs. Brun is noted for having many albums already written ahead of time.

Universal is the eighth studio album by Norwegian metal band Borknagar. It marks the return of guitarist Jens F. Ryland. The band's former vocalist Simen "ICS Vortex" Hestnæs performs vocals on the track "My Domain". The album was intended to be released in the fall of 2009, but the release date was postponed as a result of a label decision. It was released on 22 February 2010 in four formats: a regular jewelcase CD, a limited digipack which includes a bonus disc, a CD box with extras, and a gatefold LP with double vinyl.

Urd is the ninth studio album by Norwegian metal band Borknagar. Released on March 26, 2012, it is the first album to feature Simen "ICS Vortex" Hestnæs and Andreas "Vintersorg" Hedlund sharing lead vocals. It is also the final album with drummer David Kinkade, who joined Soulfly after recording sessions were completed and subsequently retired from music.

Winter Thrice is the tenth studio album by Norwegian metal band Borknagar. This is the only album to feature drummer Baard Kolstad and the last to feature longtime members Vintersorg and Jens F. Ryland.