In the mid-2000s, melodic metalcore, a subgenre of metalcore that combines the genre with melodic death metal, achieved popularity with the chart success and sales success of bands like Killswitch Engage, All That Remains, and As I Lay Dying. Deathcore bands during this time period like Bring Me the Horizon and Through the Eyes of the Dead also were influenced by melodic death metal and achieved popularity.

Much of the origin and popularity of melodic death metal can be attributed to the bands At the Gates, In Flames, and Dark Tranquillity, whose mid 1990s music releases (namely Slaughter of the Soul , The Jester Race , and The Gallery , respectively) defined the genre and laid the foundation for the Gothenburg metal scene. [1] Writer Gary Sharpe-Young considered the Gothenburg scene the commercial salvation of death metal: "Gothenburg became the new Tampa and the genre received a new lease on life." [4] The titular melodic elements can be traced to traditional Scandinavian musical motifs. Another pioneer was the English band Carcass, which performed grindcore on its first two releases but morphed into death metal and an increasingly melodic style on the Necroticism – Descanting the Insalubrious (1991) and Heartwork (1993). [3] [5] [6] Death's 1995 album Symbolic is also considered to be influential in the development of the genre. [7] Ceremonial Oath and Eucharist also are early melodic death metal bands; however, they never gained much attention outside of their own scene. [8]

In Flames' The Jester Race combined death metal with guitar riffs heavily influenced by bands like Iron Maiden and Judas Priest. The album's sound heavily contrasted with traditional death metal, and made Swedish death metal more accessible to more people compared to other Swedish death metal albums that pioneered a new sound, including the death 'n' roll of Entombed's Wolverine Blues . [9] At the Gates' Slaughter of the Soul influenced many American metal bands, especially metalcore bands who used guitar riffs and vocals emulating At the Gates' music. The vocals also were noted by AllMusic for being more decipherable than other death metal vocals, resembling high-pitched shrieks that foreshadowed 2000s American screamo bands. [10] The album brought At the Gates underground popularity, including rotation on MTV's Headbanger's Ball , a nomination at the Swedish Grammys, and American tours with Morbid Angel and Napalm Death. [11]

In the late 1990s and early 2000s, melodic death metal quickly expanded with many bands emerging, including Amon Amarth, The Black Dahlia Murder, Arch Enemy, Soilwork, and Children of Bodom. [13] Additionally, other genres would begin using melodic death metal as an influence, including melodic metalcore [14] and melodic black/death. [15] [16] Stewart Mason claims that melodic metalcore has become very popular in the United States, using the term "Swedecore" to describe Scandinavian-style metal as played by non-Nordic bands. [17] Many melodic death metal and metalcore bands (especially after melodic metalcore band Killswitch Engage rose in popularity) were heavily influenced by Slaughter of the Soul by At the Gates and had an influence of them in their music. [13] Many heavy metal bands in the mid-2000s, in turn, were labeled "At the Gates worship". [18]

In the 2000s, melodic death metal became popular among heavy metal fans. In 2002, In Flames' album Reroute to Remain peaked at number 10 on the Top Heatseekers chart. [19] The album, retaining the band's melodic death metal sound, showed a diverse mix of different musical genres, including occasional electronica and hip hop synthesizers and occasional clean singing. This helped gain the band a new amount of fans while alienating fans of In Flames' early work. [20] In Flames' next two albums, Soundtrack to Your Escape (2004) and Come Clarity (2006), peaked at numbers 145 and 58 on the Billboard 200, respectively, [19] with the latter album giving In Flames a Swedish Grammy Award. [21] The Black Dahlia Murder, Arch Enemy, Children of Bodom, and Amon Amarth also enter the Billboard 200 during the 2000s decade. In the mid–late 2000s, melodic metalcore became one of the most popular heavy metal genres, with bands like Killswitch Engage, Unearth, Bullet for My Valentine, All That Remains, Shadows Fall and Atreyu achieving success, headlining major festivals and selling a lot of records. [22] Melodic metalcore combined melodic death metal elements like melodic guitar riffs and screaming with elements of the original style of metalcore like breakdowns. [22] At the Gates and In Flames were major influences on these bands. [21] [13] Killswitch Engage are often credited as the band that brought melodic metalcore into the mainstream among heavy metal fans. [13] Some deathcore bands during this time, such as Through the Eyes of the Dead and Bring Me the Horizon, combined deathcore with melodic death metal. [23]

Melodic metalcore is a fusion genre, incorporating elements of metalcore and melodic death metal, with a heavy emphasis on melodic instrumentation, blast beats, metalcore-stylized breakdowns and clean singing. [14] These bands often take influence from the guitar riffs and writing styles of Swedish melodic death metal bands, especially At the Gates, In Flames, Arch Enemy and Soilwork. [14] 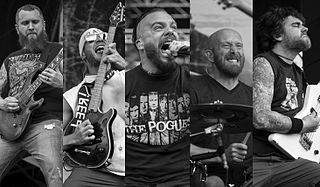 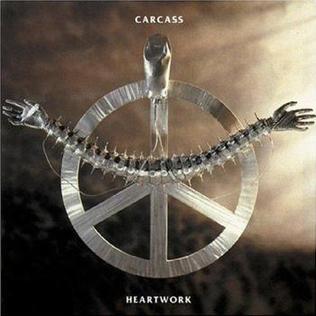 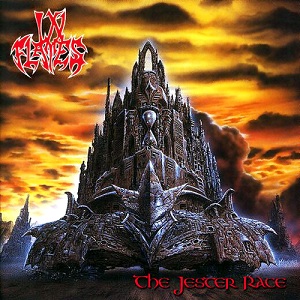 The Jester Race is the second studio album by Swedish metal band In Flames, released in February 1996. It is the first album to feature Anders Fridén as the band's vocalist, Björn Gelotte as the drummer, and Jester Head as the band's mascot. 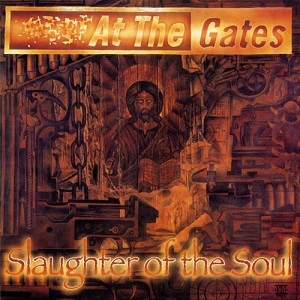 Slaughter of the Soul is the fourth studio album by Swedish melodic death metal band At the Gates, released on November 14, 1995. It was their last album before their eleven-year breakup from 1996 to 2007. Slaughter of the Soul is considered a landmark in melodic death metal and played a major role in popularizing the Gothenburg scene, alongside The Jester Race by In Flames and The Gallery by Dark Tranquillity. The album was recorded and mixed in Studio Fredman, early 1995. 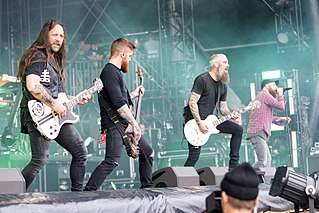 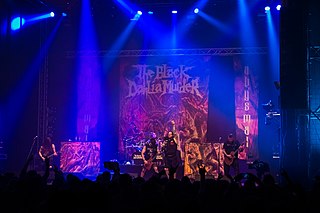 The Black Dahlia Murder is an American melodic death metal band from Waterford, Michigan, formed in 2001. Their name is derived from the 1947 unsolved murder of Elizabeth Short, often referred to as Black Dahlia. Since 2016, the band had consisted of lead vocalist Trevor Strnad, rhythm guitarist Brian Eschbach, bassist Max Lavelle, drummer Alan Cassidy, and lead guitarist Brandon Ellis. The Black Dahlia Murder has undergone various lineup changes, with Strnad and Eschbach remaining the only constant members, until the former's death in 2022. Out of the eight studio albums they have released to date, the last seven have charted on the U.S. Billboard 200, with their fifth album Ritual peaking at No. 31 in 2011, marking them as one of the most popular contemporary American extreme metal bands. Their ninth and latest album Verminous was released on April 17, 2020. 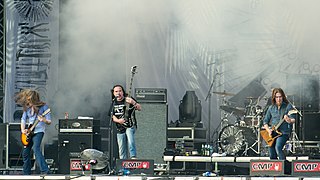 Carcass are an English extreme metal band from Liverpool that was formed in 1986. The band have gone through several line-up changes, leaving guitarist Bill Steer and bassist and vocalist Jeff Walker as the only constant members. They broke up in 1996, but reformed in 2007 without one of its original members, drummer Ken Owen, due to health reasons. To date, the band have released seven studio albums, two compilation albums, four EPs, two demo albums, one video album, and six music videos. 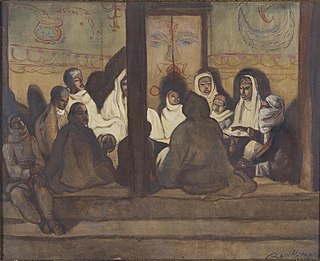 Nepalese rock refers to rock music culture of Nepal and the Nepali-speaking regions in India like Sikkim and northern West Bengal, and some parts of Bhutan and Burma. 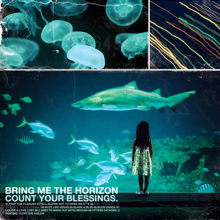 Count Your Blessings is the debut studio album by British rock band Bring Me the Horizon. Recorded at DEP International Studios in Birmingham with producer Dan Sprigg, it was originally released in the United Kingdom on 30 October 2006 by Visible Noise. The album was later issued by Earache Records in the United States on 14 August 2007. Count Your Blessings was supported by the release of music videos for two of the album's tracks: "Pray for Plagues" on 4 June 2007 and "For Stevie Wonder's Eyes Only (Braille)" on 6 March 2008.

Bloodlust is the debut studio album by American deathcore band Through the Eyes of the Dead, released on October 25, 2005 through Prosthetic Records. After releasing an EP and a split, Through the Eyes of the Dead released Bloodlust. The album is considered a deathcore album with elements of melodic death metal, featuring a musical style similar to bands like At the Gates and The Black Dahlia Murder. Before the deathcore label existed, Bloodlust was labeled as metalcore due to its combination of melodic death metal with occasional hardcore breakdowns, which resembled metalcore. Bloodlust's lyrics were inspired by serial killers, and depicted poetic lyrics telling stories and imagery. Through the Eyes of the Dead cited Cannibal Corpse, Carcass, Death, In Flames, At the Gates and Dark Tranquility as influences.

Diesear is a melodic death metal band in Taiwan. It was established in 2007.

Beatdown hardcore is a subgenre of hardcore punk with prominent elements of heavy metal. Beatdown hardcore features aggressive vocals, down-tuned electric guitars, gang vocals, heavy guitar riffs, and heavy breakdowns. The genre emerged in the late 1980s and early 1990s with bands such as Killing Time, Madball, and Sheer Terror. In the mid-late 1990s and early 2000s, many other beatdown bands emerged, such as Hatebreed, Bulldoze, Shai Hulud, and Strife. Bands such as Terror and Death Before Dishonor gained cult followings in the mid–late 2000s. New York hardcore bands such as Agnostic Front, Warzone, Sick of It All, and Cro-Mags and the thrash metal subgenre crossover thrash paved the way for beatdown.