Neoclassical metal is a subgenre of heavy metal that is heavily influenced by classical music and usually features very technical playing, [1] [Note 1] consisting of elements borrowed from both classical and speed metal music. Deep Purple's Ritchie Blackmore pioneered the subgenre by merging classical melodies and blues rock. Later, Yngwie Malmsteen became one of the most notable musicians in the subgenre, and contributed greatly to the development of the style in the 1980s. [1] [Note 2] [2] Other notable players in the genre are Randy Rhoads, John Petrucci, Jason Becker, Tony MacAlpine, Vinnie Moore, Uli Jon Roth, Stéphan Forté, Wolf Hoffmann, [3] [4] [ circular reference ] Timo Tolkki, and Marty Friedman. [1] [Note 3]

Although the genre is mainly associated with guitarists (especially lead guitarists), keyboardists like Jens Johansson, Michael Pinnella, Alex Staropoli and Janne Wirman are also found playing in this style, with Jon Lord as an early influence on the genre.

Neoclassical metal takes its name from a broad conception of classical music. In this it is a concept distinct from how neoclassicism is understood within the classical music tradition. Neoclassical music usually refers to a movement in musical modernism which developed roughly a century after the end of the Classical period and peaked during the years in between the two World Wars.

On the other hand, neoclassical metal music does not restrict itself to a return to classical aesthetic ideals, such as equilibrium and formalism. Its influences include both the Romantic musical period and the Baroque period of the seventeenth and first half of the eighteenth centuries. The music of late Baroque composers such as Vivaldi, Handel and Bach was often highly ornate. Neoclassical metal musicians such as Yngwie Malmsteen and Joshua Perahia are inspired by this aspect of Baroque music [1] [Note 4] and also by later composers such as the violinist Niccolò Paganini in using runs and other decorative and showy techniques in their performances. Neoclassical metal music thus looks to classical music as broadly understood by the general public and not to the more specialist technical definition used within classical circles.

History of the genre and influences

In the 1960s and 1970s, there were many works that influenced this subgenre, Deep Purple's Concerto for Group and Orchestra being the most important one. Other bands, like Rainbow, also featured neoclassical influences. Early classical influences within hard rock and heavy metal are most notably found in the playing of Jon Lord, Keith Emerson, Ritchie Blackmore, Uli Jon Roth and Randy Rhoads. But it was in the 1980s when neoclassical metal became a distinct subgenre. [1] [Note 5]

The "golden age" of neoclassical metal in the middle to late 1980s revolved around the sizeable roster of flashy electric-guitar soloists who recorded mostly instrumental albums for Mike Varney's Shrapnel Records label. Swedish guitarist Yngwie Malmsteen, widely regarded as the originator [Note 6] and still-reigning king of neoclassical metal, [5] was brought to the United States by Varney to sign with Shrapnel Records in 1982.

In recent years, appreciation of the neoclassical metal oeuvre has been largely confined to guitarists in more of an underground setting, as the style is not well known beyond the realm of guitarists. Today, there are many more bands that contribute as a whole as opposed to the "solo" musicians in the past.

A common practice in the genre is to transcribe classical pieces and play them in a rock/metal band format. The Baroque and Classical periods have been particularly influential to the genre because of their unique sound and techniques that blend into a rock setting effectively.[ citation needed ]

A commonly used feature in Neoclassical metal is the use of diminished seventh arpeggios. As diminished seventh chords are essentially an equidistant scale consisting of stacked minor thirds, they become a useful tool for modulation, as it is possible to move by minor thirds through the chord/arpeggio, then use the diminished chord as a leading tone to resolve to the tonic a semitone above it. Pentatonic scales are also prevalent and conveniently have the same picking structure as minor thirds on the guitar. Playing back and forth between the two scales is common and a good example of how neoclassical metal uses different scales stacked on top of each other to progress melodic ideas. 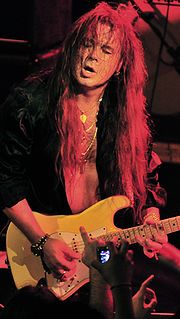 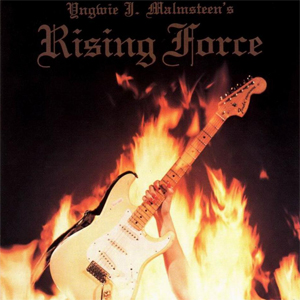 Rising Force is the first studio album by guitarist Yngwie Malmsteen, released on 5 March 1984 through Polydor Records. The album reached No. 14 on the Swedish albums chart, No. 60 on the US Billboard 200, and received a nomination for Best Rock Instrumental Performance at the 1986 Grammy Awards. It is regarded as a landmark release in the shred and neoclassical metal genres. 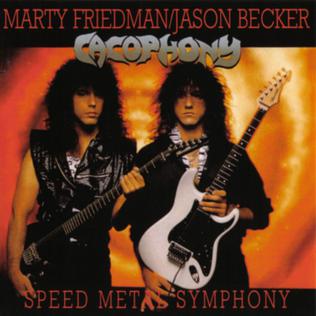 Speed Metal Symphony is the first studio album by the American heavy metal band Cacophony, released in 1987 through Shrapnel Records.

Racer X was an American heavy metal band formed in 1985 in Los Angeles, California. The group has gone through a hiatus, and a few lineup changes with bassist Juan Alderete and vocalist Jeff Martin being the sole constant members. The band is signed to Shrapnel Records.

Fire & Ice is the sixth studio album by guitarist Yngwie Malmsteen, released on 7 February 1992 through Elektra Records. The album topped the Japanese albums chart, reached No. 121 on the US Billboard 200 and charted within the top 90 in the Netherlands, Sweden and Switzerland.

The Seventh Sign is the seventh studio album by guitarist Yngwie Malmsteen, released on 9 May 1994.

Carl Johan Grimmark is a Swedish guitarist. He has appeared with several influential Christian metal bands including Narnia, Saviour Machine, and Rob Rock. He recently joined the band Beautiful Sin in 2006. He also has been a special guest guitarist on fellow Narnia bandmate Christian Liljegren's side projects Divinefire and Audiovision. He recently recorded his debut solo album that is set to be titled Grimmark, where he also handles the lead vocals. Grimmark's style of playing, especially on Narnia's earlier work, is often compared to the neo-classical metal stylings of Yngwie Malmsteen, or under a more broad genre, neo-classicism.

Mind's Eye is the first studio album by guitarist Vinnie Moore, released in 1986 through Shrapnel Records. Recorded in eleven days when Moore was 21 years old, the album was ranked third on the all-time top ten list of shred albums in a 2009 article by Guitar World magazine. 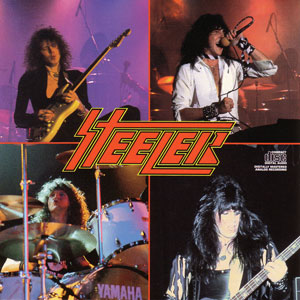 Steeler is the debut studio album by the American heavy metal band of the same name, released in 1983. It was largely recorded at Prairie Sun Studios in Cotati, California, about fifty miles north of San Francisco. It was the only album released by the band until a 2005 compilation album released by singer Ron Keel. After the album was released the band broke up. Guitarist Yngwie Malmsteen joined the band Alcatrazz, bassist Rik Fox would form Sin, drummer Mark Edwards signed on with Lion, while Ron Keel would spin off Steeler into Keel.

Street Lethal is the first studio album by the American heavy metal band Racer X, released on January 1, 1986 through Shrapnel Records. The instrumental track "Y.R.O." stands for "Yngwie Rip-Off", as it bears similarities to "Black Star" by guitarist Yngwie Malmsteen, with an almost identical bassline. It later appeared in the 2009 video game Brütal Legend.

Caprice No. 5 is one of 24 pieces composed by virtuoso violinist Niccolò Paganini in the early 19th century. The piece is known for its incredible speed and extremely high technical difficulty. Paganini is said to have been able to play it on one string, but there is no evidence to support or refute this.

Joey Tafolla is an American guitarist. 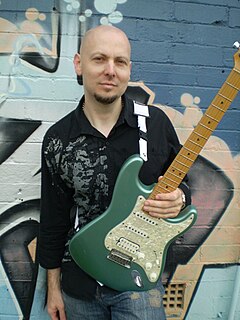 Artension is a North American neoclassical progressive metal band, founded in 1993 by keyboardist Vitalij Kuprij. The band split up after recording seven albums from 1996 to 2004, but reformed in 2016 with the intention of releasing an eighth album.