Further information: Progressive music
See also: Progressive rock
As Robert Fripp was all too aware, we cannot keep referring back to 1974, either negatively or positively, in order to find out what progressive rock later became. If we do refer back, then we should not use the classic phase of progressive rock as a fixed point to determine what was to follow.

"Post-progressive" is rock music which distinguishes itself from the persistent style of 1970s prog, seeking a return to the genre's original principles. [2] The "post" is meant to acknowledge the development of other forms of avant-garde and popular music since the mid 1970s; it does not reference "postmodernism". [2] Purveyors explicitly embrace new computer technologies and sounds. [6] Some post-progressive bands still draw upon selective aspects of vintage prog, even as they actively seek to distance themselves from the style. [7] Particular influences on latter-20th century post-progressive artists include Jimi Hendrix, Frank Zappa, the Beatles, and King Crimson. [8]

In the opinion of King Crimson's Robert Fripp, progressive music was an attitude, not a style. He believed that genuinely "progressive" music pushes stylistic and conceptual boundaries outwards through the appropriation of procedures from classical music or jazz, and that once "progressive rock" ceased to cover new ground – becoming a set of conventions to be repeated and imitated – the genre's premise had ceased to be "progressive". [9] According to Paul Hegarty and Martin Halliwell, post-progressive did not directly derive from psychedelia, folk, and jazz as prog rock did, instead citing "explicit reference points of post-progressive music" lying within ambient, folk rock, forms of jazz, krautrock, the minimalism of New York art rock, and electronic music. [2]

Post-progressive's beginning may be located after 1978. [13] Author Bill Martin argues that Robert Fripp, Bill Laswell, and Peter Gabriel could all be considered transitional figures in post-progressive rock, crediting Brian Eno as the music's most important catalyst, and explaining that his 1973–77 solo albums merged "warped aspects of progressive rock" with "a strange premonition of punk" and "the first approximations of new wave". [14] Additionally, Talking Heads expanded new wave by combining the urgency of punk rock with the sophistication of progressive rock, as Martin writes: "A good deal of the more interesting rock since that time is clearly 'post-Talking Heads' music, but that means it is post-progressive rock as well." [14] After the 1970s, the post-progressive style followed in the traditions of King Crimson's 1981 album Discipline , with its introduction of minimalism and ethnic musics, elements which were new to rock. [3]

Hegarty and Halliwell credit Radiohead for creating "a new wave of progressiveness", explaining that "Radiohead's reintegration of rock into a post-progressive context ... they did not need to refer back to the sounds or styles of 1970s prog rock in order to make authentic progressive rock." [15] 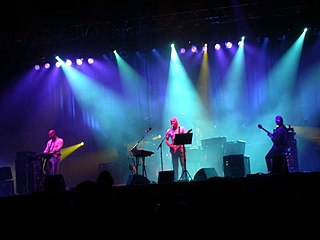 King Crimson are an English progressive rock band formed in London in 1968. King Crimson have been influential both on the early 1970s progressive rock movement and many contemporary artists. Although the band has undergone numerous formations throughout its history, Robert Fripp is the only constant member of the group and is considered the band's leader and driving force. The band has earned a large cult following. They were ranked No. 87 on VH1's 100 Greatest Artists of Hard Rock. Although considered to be a seminal progressive rock band, they have often distanced themselves from the genre: as well as influencing several generations of progressive and psychedelic rock bands, they have also been an influence on subsequent alternative metal, hardcore and experimental/noise musicians. 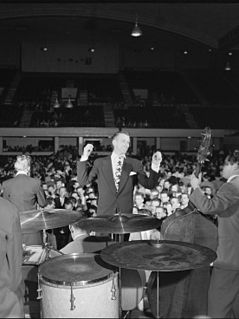 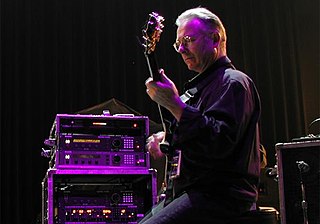 Robert Fripp is an English musician, songwriter, and record producer, best known as the guitarist, founder and longest lasting member of the progressive rock band King Crimson. He has also worked extensively as a session musician and collaborator, notably with David Bowie, Blondie, Brian Eno, and David Sylvian. He has also contributed sounds to the Windows Vista operating system. His discography includes contributions to over 700 official releases. 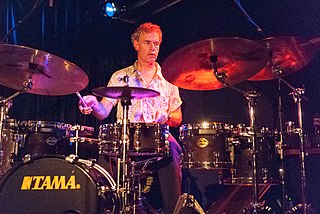 William Scott Bruford is an English former drummer, percussionist, songwriter, producer, and record label owner who first gained prominence as a founding member of the progressive rock band Yes. After his departure from Yes, Bruford spent the rest of the 1970s playing in King Crimson, touring with Genesis and U.K., and eventually forming his own group, Bruford. 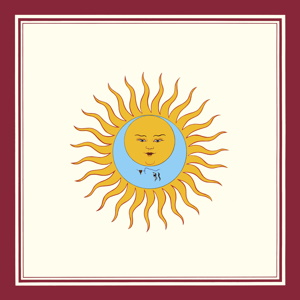 Larks' Tongues in Aspic is the fifth studio album by the English progressive rock group King Crimson, released on 23 March 1973 through Island Records in the UK and Atlantic Records in the United States and Canada. This album is the debut of King Crimson's fifth incarnation, featuring original member and guitarist Robert Fripp and new members John Wetton, David Cross, Jamie Muir (percussion), and Bill Bruford (drums). It is also a key album in the band's evolution, drawing on Eastern European classical music and European free improvisation as central influences.

Neo-progressive rock is a subgenre of progressive rock which developed in the UK in the early 1980s. The genre's most popular band, Marillion, achieved mainstream success in the decade. Several bands from the genre have continued to record and tour. 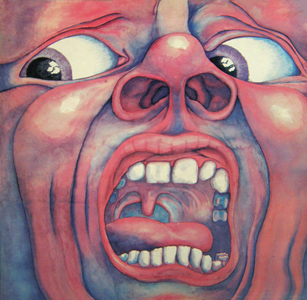 In the Court of the Crimson King is the debut studio album by English rock band King Crimson, released on 10 October 1969 by Island Records. The album is one of the first and most influential of the progressive rock genre, where the band largely combined blues influences that rock music was founded upon with elements of jazz, classical, and symphonic music. 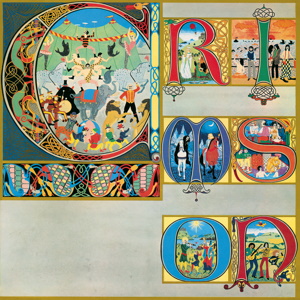 Lizard is the third studio album by British progressive rock band King Crimson, released in December 1970 by Island Records in the UK, and in January 1971 by Atlantic Records in the United States and Canada. It was the second consecutive King Crimson album recorded by transitional line-ups of the group that did not perform live, following In the Wake of Poseidon. This is the only album by the band to feature bassist/vocalist Gordon Haskell and drummer Andy McCulloch as official members of the band. 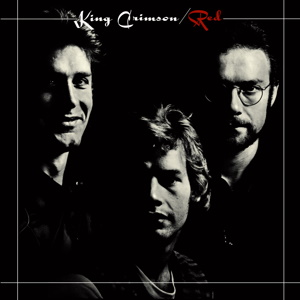 Red is the seventh studio album by English progressive rock band King Crimson. It was released on 6 October 1974 through Island Records in the United Kingdom and Atlantic Records in North America and Japan. It was their last studio recording of the 1970s and the last before lead member Robert Fripp temporarily disbanded the group. Though their lowest-charting album at the time, spending only one week in the UK charts, Red has received significant critical acclaim. 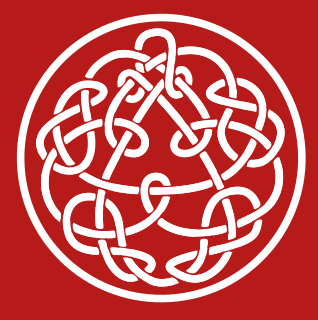 Discipline Global Mobile is an independent record label founded in 1992 by Robert Fripp and producer/online content developer David Singleton. DGM has released solo music by Fripp as well as work by various affiliated musicians and bands including King Crimson, The Vicar, the California Guitar Trio and others. The label has offices in Salisbury, England, and Los Angeles, California;

"Starless" is a song by British progressive rock band King Crimson. It is the final track on the Red album, released in 1974, after which the group disbanded. 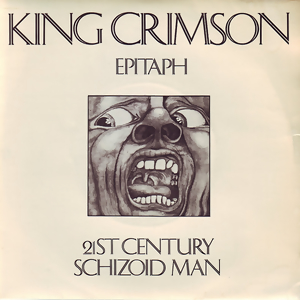 "Epitaph" is the third track on British progressive rock band King Crimson's 1969 album In the Court of the Crimson King. It was written by Robert Fripp, Ian McDonald, Greg Lake, and Michael Giles with lyrics written by Peter Sinfield.

This is a timeline of artists, albums, and events in progressive rock and its subgenres. This article contains the timeline for the period 1980 - 1989.

Experimental rock, also called avant-rock, is a subgenre of rock music which pushes the boundaries of common composition and performance technique or which experiments with the basic elements of the genre. Artists aim to liberate and innovate, with some of the genre's distinguishing characteristics being improvisational performances, avant-garde influences, odd instrumentation, opaque lyrics, unorthodox structures and rhythms, and an underlying rejection of commercial aspirations.

Proto-prog is the earliest work associated with the first wave of progressive rock music, known then as "progressive pop". Such musicians were influenced by modern classical and other genres usually outside of traditional rock influences. They often employed longer and more complicated compositions, interconnected songs as medley, and studio composition. Some of the artists that were essential to the development of progressive rock, rather than just anticipating the movement, include the Beatles, the Beach Boys, the Doors, The Mothers of Invention, the Pretty Things, the Zombies, the Byrds, the Grateful Dead, and Pink Floyd.

Progressive rock is subgenre of rock music that developed in the United Kingdom and United States throughout the mid to late 1960s. Progressive rock, which initially had classical music influences, has come to include other fusions of music styles including jazz fusion, metal and folk rock musics. Progressive rock is an approach that combines elements of diverse styles. Jerry Ewing, editor of Prog Magazine, explains that "Prog is not just a sound, it's a mindset." Dream Theater guitarist John Petrucci outlines that Progressive rock is defined by its very lack of stylistic boundaries. The advent of the concept album, plus the genre's roots in psychedelia, led albums and performances to be viewed as combined presentations of music, lyrics, and visuals.