Jose Carlos Ruiz (Pedro Infante) is a singer pop star that meets Ana Luisa de la Fuente (Emilia Guiú) an assistant manager of a Girls School. José Carlos begins to court successfully and quickly engage in marriage. Then Jose Carlos begins to realize that his future wife is prejudiced against black people, because she does not accept that he performs alongside mulatto artists.

Ana Luisa herself has a nanny called Merce (Rita Montaner) that has cared for her all her life and is a woman of color, she is accustomed to her but openly dislikes her. José Carlos tries his best to resolve the conflicts that his wife's racist attitude brings to their family. Ana Luisa soon gives birth to a daughter who surprisingly turns out to be dark-skinned, horrifying Ana Luisa. They name her Belen (Titina Romay).

Belen suffers a lot because her mother does not love her because of her color. Because of that Belen gets paint on one occasion and paints her face white trying to be accepted by her mom. Ana Luisa blames Jose Carlos' family for having African ancestry. But José Carlos knows the truth. Father Francisco (Nicolás Rodríguez) revealed to him that Ana Luisa's real mother is the nanny Merce who in her youth had an affair with her boss, Mr. de la Fuente. In order for her daughter to receive the benefits of inheriting a rich position, Merce renounced her motherhood but to be close she took a role as a servant in the household.

Nana Merce falls ill and Jose Carlos tries to bring Isabel (Chela Castro), a fellow artist to take care of Belen because her mother does not give her any attention. Then tragedy occurs because Ana Luisa comes to believe that her husband wants stick to his lover in their home and she reacts violently throwing nanny Merce down the stairs by accident. On her deathbed, Merce tells Ana Luisa the truth about her parentage. After this shocking reveal, Ana Luisa accepts her heritage and cries for her mother after she dies. She also decides to start loving her daughter and gives her a hug.

Amigas y rivales is a Mexican juvenile telenovela produced by Emilio Larrosa for Televisa in 2001.

Hechizo de Amor is a Venezuelan telenovela written by Alberto Gómez and produced by Venevisión in 2002. The show lasted 130 episodes and was distributed internationally by Venevisión International.

Amar en tiempos revueltos is a Spanish soap opera set in the times of the Spanish civil war and the early Francoism. The serial has been aired from 2005 and has won prizes in Spain and a Silver Medal in the New York Festival. Since January 2013 has aired on Antena 3 with the new name, Amar es para siempre.

This is a list of deputies elected to the 8th Legislature of the Galician Parliament at the 2009 parliamentary elections.

Niña Bonita is a 1988 Venezuelan telenovela produced by Venevisión. It stars Ruddy Rodríguez in her first protagonist role and Luis Jose Santander. 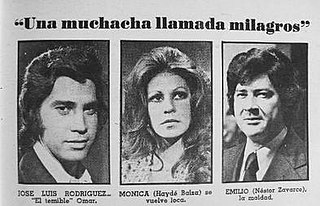 Una muchacha llamada Milagros is a Venezuelan telenovela written by Delia Fiallo and produced by Venevisión in 1974.

Al filo de la muerte is a Mexican telenovela produced by Emilio Larrosa for Televisa in 1991.

Angelitos negros is a Mexican telenovela produced by Valentín Pimstein for Teleprogramas Acapulco, SA in 1970.

Por amor is a Mexican telenovela produced by Irene Sabido for Televisa in 1981. It is an original story by Rita Valencia and Manuel de la Rosa. It starred by María Sorté, Manuel Ojeda, Adriana Roel, Carlos Cámara, Chela Nájera and Salvador Sánchez.

Bianca Vidal is a Mexican telenovela produced by Valentín Pimstein for Televisa in 1982. Bianca Vidal was based on the soap opera María Salomé, original of Inés Rodena which was then elongated by Sacrificio de mujer from the same author.

Full Speed Ahead is a 1951 Mexican comedy film directed by Ismael Rodríguez and starring Pedro Infante, Luis Aguilar and Aurora Segura. It was followed by a sequel What Has That Woman Done to You? the same year.

The Strange Passenger is a 1953 Mexican mystery film directed by Fernando A. Rivero and starring Emilia Guiú, Víctor Manuel Mendoza and Tito Junco.

Angelitos negros is a 1970 Mexican drama film written and directed by Joselito Rodríguez and starring Manuel López Ochoa, Martha Rangel, Titina Romay, and American actress Juanita Moore. It is a remake of the 1948 film of the same name, also directed by Rodríguez.