The station opened in 1898 by the North British Railway. The station was situated behind 'the nest' and on the north side of the A72. This was a private halt for the members of the Edinburgh Angling Club who were using the club's cottage 'The Nest'. Passengers who wanted a train to stop at the halt had to notify the stationmaster at Thornielee or Clovenfords and passengers wanting to be picked up had to give prior notice. Members of the Edinburgh Angling Club could get special tickets to/from the station but regular passengers had to buy a ticket from the previous/next station. Tickets would be collected at the previous station and passengers would have to buy a ticket in advance. The station closed to passengers and goods traffic in the late 1940s, although the actual date of closure is not recorded. [1] 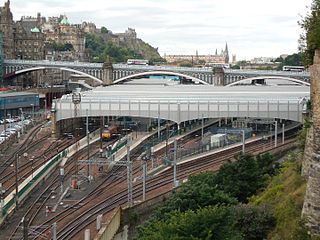 Edinburgh Waverley railway station is the principal railway station serving Edinburgh, Scotland. It is the second busiest station in Scotland, after Glasgow Central. It is the northern terminus of the East Coast Main Line, 393 miles 13 chains from London King's Cross, although some trains operated by London North Eastern Railway continue to other Scottish destinations beyond Edinburgh.

Aviemore railway station serves the town and tourist resort of Aviemore in the Highlands of Scotland. The station, which is owned by Network Rail (NR) and managed by ScotRail, is on the Highland Main Line, 83 miles 31 chains from Perth, between Kingussie and Carrbridge, and is also the southern terminus of the Strathspey preserved railway.

Dunbar railway station serves the town of Dunbar in East Lothian, Scotland. It is located on the East Coast Main Line and is a two platform station. It is 29 miles 5 chains (46.8 km) from Edinburgh Waverley and 364.092 miles (585.950 km) from London King's Cross.

Longniddry railway station is located at the southeast corner of the village of Longniddry, East Lothian, Scotland. The station is on the East Coast Main Line, 13+1⁄4 miles (21.3 km) east of Edinburgh Waverley, and is served by stopping passenger trains on the North Berwick Line.

Woodlesford railway station serves Woodlesford and Rothwell in West Yorkshire, England. It lies on the Hallam Line and the Pontefract Line, 6 miles (9.7 km) south of Leeds.

Tain railway station is an unstaffed railway station serving the area of Tain in the Highland council area of Scotland. The station is on the Far North Line, 44 miles 23 chains (71.3 km) from Inverness, between Fearn and Ardgay. ScotRail, who manage the station, operate all services.

Loch Awe railway station is a railway station serving the village of Lochawe, on the northern bank of Loch Awe, in western Scotland. This station is on the Oban branch of the West Highland Line, originally part of the Callander and Oban Railway. It is sited 49 miles 48 chains (79.8 km) from Callander via Glen Ogle, between Dalmally and Falls of Cruachan. ScotRail manage the station and operate all services. 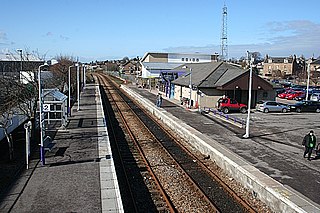 Elgin railway station is a railway station serving the town of Elgin, Moray in Scotland. The station is managed and served by ScotRail and is on the Aberdeen to Inverness Line, between Keith and Forres, measured 12 miles 18 chains (19.7 km) from Forres.

Huntly railway station is a railway station serving the town of Huntly in Scotland. The station is managed by ScotRail and is on the Aberdeen to Inverness Line, between Insch and Keith, 40 miles 67 chains (65.7 km) from Aberdeen.

Bolton Abbey railway station is on the Embsay and Bolton Abbey Steam Railway. It serves Bolton Abbey, although it is closer to Bolton Bridge, in North Yorkshire, England and several countryside walking routes. The station is the current terminus of the steam railway.

Girtford Halt was a short-lived railway halt on the Varsity Line which served the hamlet of Girtford near Sandy in Bedfordshire, England. It was opened by the London, Midland and Scottish Railway in 1938, but closed to passenger traffic two years later in 1940. The line itself closed in 1968, and the site of the railway station has been obliterated by a roundabout.

Fotherby Halt was a railway halt on the East Lincolnshire Railway which served the village of Fotherby in Lincolnshire between 1905 and 1961. The station was opened on the site of a previous station named Fotherby Gate House which had closed in 1872. The second station closed in 1961, but the line through it remained open for freight until December 1980. The line through the station could be reopened by the Lincolnshire Wolds Railway as part of its extension south from Ludborough to Louth.

Cairnbulg railway station was a station on the Fraserburgh and St Combs Light Railway, Aberdeenshire. It was opened in 1903 as Inverallochy and was renamed Cairnbulg on 1 September 1903.

The Edinburgh, Leith and Newhaven Railway was a railway company formed in 1836 to connect the city of Edinburgh with the harbours on the Firth of Forth. When the line connected to Granton, the company name was changed to the Edinburgh, Leith and Granton Railway. It opened part of its route in 1846, but reaching the centre of Edinburgh involved the difficult construction of a long tunnel; this was opened in 1847. It was on a steep incline and was worked by rope haulage. 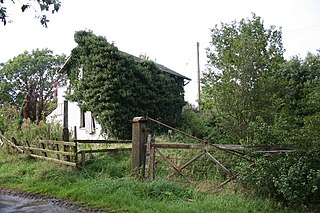 Grainsby Halt was a railway halt on the East Lincolnshire Railway which served the hamlet of Grainsby in Lincolnshire between 1905 and 1952. The station, which opened as part of a new motor train service between Grimsby and Louth, was opened to serve a Victorian hall situated 2 miles (3.2 km) to the west. The station, one of the smallest to be taken over by British Railways on nationalisation in 1947, never really justified its existence and closed in 1952 following a period of temporary closure during the Second World War. The line through Grainsby remained open for freight until December 1980.

The Peebles Railway was a railway company that built a line connecting the town of Peebles in Peeblesshire, Scotland, with Edinburgh. It opened on 4 July 1855, and it worked its own trains. 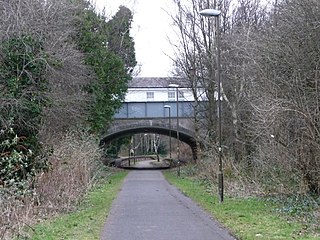 Pitfodels railway station or Pitfodels Halt was opened on 2 July 1894 by the GNoSR and served a suburb of Aberdeen with housing and estates such as Wellwood, Inchgarth and Norwood. The halt was one of several victims of the 1937 closure of stations on the Aberdeen suburban service. The Deeside Railway itself ran from Aberdeen (Joint) to Ballater. Pitfodels is located in the parish of Peterculter, Aberdeenshire, Scotland.