Animal fancy is a hobby involving the appreciation, promotion, or breeding of pet or domestic animals.

Fancy may include ownership, [1] showing, animal sports and other competitions, and breeding. Hobbyists may simply collect specimens of the animal in appropriate enclosures (vivaria), such as an aquarium, [2] terrarium, or aviary. Some fanciers keep hobby farms, or menageries (private zoos). There are many animal fancy clubs and associations in the world, which cater to everything from pigeons to Irish Wolfhounds. Fanciers and fancierdom may collectively be referred to as the fancy for that kind of animal, e.g. the cat fancy.

Animal-fancy hobbies include the keeping of animals considered exotic pets; a rapidly growing [3] example is herpetoculture, the keeping of reptiles and amphibians.

Some examples of international animal fancy organizations are:

For many species of domesticated animal there are no international groups, but numerous unrelated national organizations, e.g. the American Poultry Association, and the New Zealand Cavy Club. They may commingle the interests of keepers of pet and show animals, and breeders of livestock and working animals (e.g. the British Horse Society), or focus on one or the other (e.g. the British Show Horse Association). For some species, there are few multi-breed organizations, but many breed-specific clubs, e.g. the Australian Stock Horse Society, the Parthenais Cattle Breeders Association, the Bernese Mountain Dog Club of New Zealand, etc. Single-breed clubs often exist regardless of the establishment of multi-breed groups, and may or may not affiliate with them, while national organizations often have subnational affiliates. Organizations at any level may combine the features of a breed registry, a fanciers' membership organization, a competition governing body, a trade association, a preservation group, and other categories, and may be nonprofits or commercial enterprises. Similar species-specific clubs exist for various non-domesticated species, e.g. the Golden Conure Society and the American Fancy Rat and Mouse Association. 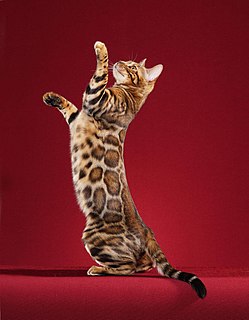 The Bengal cat is a domesticated cat breed created from hybrids of domestic cats, the Asian leopard cat and the Egyptian Mau, which gives them their golden shimmer – the breed name comes from the taxonomic name. Bengals have a wild appearance and may show spots, rosettes, arrowhead markings, or marbling. 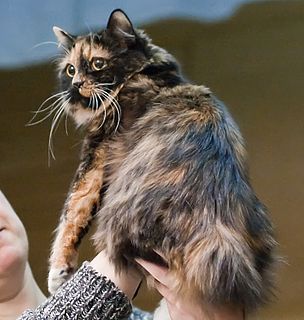 The Cymric is a breed of domestic cat. Some cat registries consider the Cymric simply a semi-long-haired variety of the Manx breed, rather than a separate breed. Except for the length of fur, in all other respects the two varieties are the same, and kittens of either sort may appear in the same litter. The name comes from Cymru, the indigenous Welsh name of Wales, though the breed is not associated with Wales, and the name was possibly given as an attempt to provide a "Celtic"-sounding name for the breed. The breed's Manx bloodline originated in the Isle of Man, though Canada claims to have developed the long-haired variant. The breed is called the Longhair Manx or a similar name by some registries. 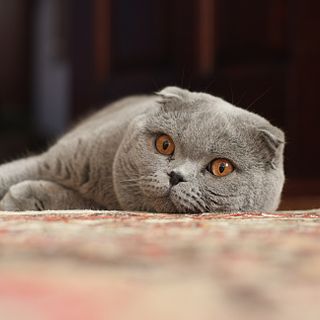 The Scottish Fold is a breed of domestic cat with a natural dominant-gene mutation that affects cartilage throughout the body, causing the ears to "fold", bending forward and down towards the front of the head, which gives the cat what is often described as an "owl-like" appearance. 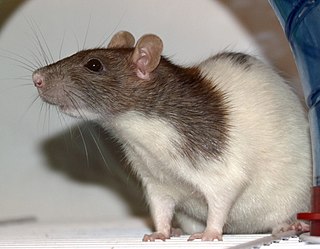 The fancy rat is the domesticated form of Rattus norvegicus, the brown rat, and the most common species of rat kept as a pet. The name fancy rat derives from the idea of animal fancy or the phrase "to fancy". Wild-caught specimens that become docile and are bred for many generations still fall under the fancy type. 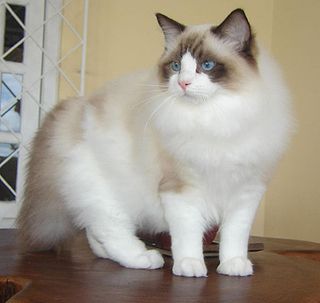 The Ragdoll is a cat breed with a color point coat and blue eyes. They are large and muscular semi-longhair cats with a soft and silky coat. Developed by American breeder Ann Baker in the 1960s, they are best known for their docile and placid temperament and affectionate nature. The name "Ragdoll" is derived from the tendency of individuals from the original breeding stock to go limp and relaxed when picked up.

The Singapura is one of the smallest breeds of cats, noted for its large eyes and ears, brown ticked coat, and blunt tail. Reportedly established from three "drain cats" imported from Singapore in the 1970s, it was later revealed that the cats were originally sent to Singapore from the US before they were exported back to the US. Investigations by the Cat Fanciers' Association (CFA) concluded no wrongdoing and the Singapura kept its status as a natural breed.

A kennel club is an organization for canine affairs that concerns itself with the breeding, showing and promotion of more than one breed of dog. Kennel clubs became popular in the mid 19th century. All-encompassing kennel clubs are also referred to as 'all-breed clubs', although "all" means only those breeds that they have decided to recognize, and "breed" means purebred dogs, not including dog hybrids and crossbreeds or mixed-breed dogs. A club that handles only one breed is known as a breed club. 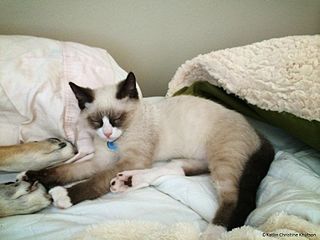 The Snowshoe is a breed of cat originating in the United States of America in the 1960s. Snowshoes were first produced in Philadelphia when a Siamese breeder's cat gave birth to three kittens with white feet. The breeder, Dorothy Hinds-Daugherty, then began a breeding program to produce what were originally called "Silver Laces", crossing the strangely marked Siamese cats with bi-color American Shorthair cats and other breeds. When Hinds-Daugherty left the program, Vikki Olander began working with the cats and recruited new breeders, as well as worked towards full recognition within cat associations. Despite having existed for 45 years, Snowshoes are rare due to the difficulty of reproducing the correct coat markings. The marks are based on recessive genes for color points and on the co-dominant but variably-expressed piebald pattern gene, making it difficult to predict the appearance of offspring.

Breed clubs are associations or clubs with activities centered on a single, specific breed of a particular species of domesticated animal. The purpose of the association will vary with the species of animal and the goals and needs of the members of the association. Breed associations or clubs may vary in their goals, activities and nomenclature from country to country, even for the same breed. Most domesticated animals, whether they are agricultural animals such as cattle, llamas, poultry, sheep and pigs, or companion animals such as pigeons, horses, cats and dogs, have breed clubs associated with the breed.

In agriculture and in the hobby of animal fancy, a breeder is an individual animal used for selective breeding. A breeder is usually a purebred animal, bred with the intent of producing purebred, or even show-quality animals. However, in some cases, a breeding animal is crossbred with another breed or a mixed breed with the intent of combining aspects of two or more different breeds.

A backyard breeder is an amateur animal breeder whose breeding is considered substandard, with little or misguided effort towards ethical, selective breeding. Unlike puppy mills and other animal mill operations, backyard breeders breed on a small scale, usually at home with their own pets, and may be motivated by things such as monetary profit, curiosity, to gain new pets, or to show children "the miracle of birth".

Overpopulation in domestic pets is the surplus of pets, such as cats, dogs, and exotic animals. In the United States, six to eight million animals are brought to shelters each year, of which an estimated three to four million are subsequently euthanized, including 2.7 million considered healthy and adoptable. Euthanasia numbers have declined from the 1970s, when U.S. shelters euthanized an estimated 12 to 20 million animals. Most humane societies, animal shelters and rescue groups urge animal caregivers to have their animals spayed or neutered to prevent the births of unwanted and accidental litters that could contribute to this dynamic.

A cat registry or cat breed registry, also known as a cat fancier organisation, cattery federation, or cat breeders' association, is an organisation that registers domestic cats of many breeds, for exhibition and for breeding lineage tracking purposes. A cat registry stores the pedigrees (genealogies) of cats, cattery names, and other details of cats; studbooks, breed descriptions, and the formal breed standards ; lists of judges qualified to judge at shows run by or affiliated with that registry; and sometimes other information. A cat registry is not the same as a breed club or breed society. Cat registries each have their own rules and usually also organise or license (sanction) cat shows. The show procedures vary widely, and awards won in one registry are not normally recognised by another. Some registries only serve breeders, while others are oriented toward pet owners and provide individual as well as cattery memberships, while yet others are federations only deal with breed clubs or even other registries as intermediaries between the organisation and breeders.

Aegean cats are a naturally occurring landrace of domestic cat originating from the Cycladic Islands of Greece. It is considered a natural cat, developing without human interference. Development of the Aegean cat as a formal breed began in the early 1990s by breeders in the fledgling Greek cat fancy, but the variety has yet to be recognized by any major fancier and breeder organization. It is considered to be the only native Greek variety of cat.

Lumina Media is an American publisher of magazines, books, and associated websites. Throughout all its incarnations, the business has focused on the pet-keeping and -breeding market, though also with some other topical lifestyle and hobby publications. The original company was founded in 1974 as Fancy Publications by Norman Ridker, absorbing Kennel Club Books in 2004, which made BowTie a main competitor to TFH Publications in the pet-book market. After some financial difficulties, BowTie was restructured as I-5 Publishing in 2013 under the new ownership of David Fry and Mark Harris, and took on its present name in 2016. In 2002, Bob Garfield of On the Media called Fancy Publications "the Time Warner of the pet magazine business".

A dog breed club is an association or club of fanciers of a single, specific breed of dog. 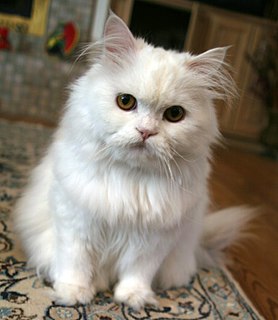 The Persian cat is a long-haired breed of cat characterized by its round face and short muzzle. It is also known as the "Persian Longhair" in the English-speaking countries. In the Middle East region, they are widely known as "Shirazi cats" and in Iran they are known as "Shiraz cat". The first documented ancestors of the Persian were imported into Italy from Iran around 1620. Recognized by the cat fancy since the late 19th century, it was developed first by the English, and then mainly by American breeders after the Second World War. Some cat fancier organizations' breed standards subsume the Himalayan and Exotic Shorthair as variants of this breed, while others treat them as separate breeds.